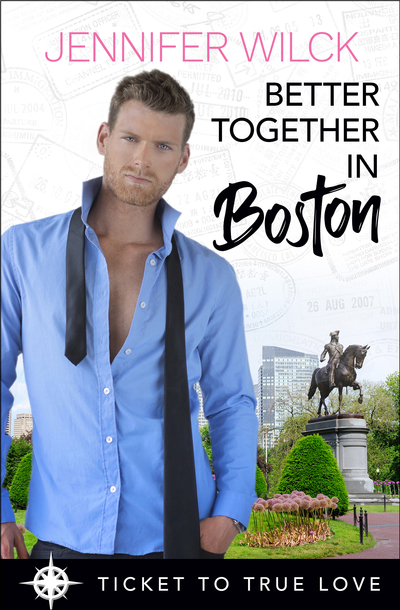 I’m so happy to be back on Lisabet Sarai’s blog today!

People often ask me where my inspiration comes from, and while it’s a great question, it’s a difficult one to answer. Especially these days, when I’m truly uninspired to write anything. My writing and my reading are ways for me to escape the reality of every day, but quarantining for more than a year has used up my creativity well. I’m glad life is starting to get back to normal so I can refill it.

However, even if I’m uninspired, my stories can’t write themselves. And when I’ve promised to submit a story by a deadline, well, I have no choice but to push through the murk until something takes shape.

For Better Together in Boston, I wanted to write something a little different, at least for me. And to do that, I switched the roles of my hero and heroine. In most of my stories, it’s the heroine who is looking to settle down (even if she doesn’t know it yet) and the hero who usually hasn’t recognized his need to do so. Well, I’m not sure if it was a reflection of my own state of mind or what, but I decided that my heroine was going to be anti-love. Yes, I was writing a romance. And yes, there are many stories out there where the heroine is completely independent and self-sufficient, so maybe my desire wasn’t anything new.

However, while I write independent heroines, I’d never written one who thought weddings were stupid and marriage was not in her cards. Until I wrote Anna. She grew up with a single mother who sacrificed everything to raise her daughter. As a result, Anna is filled with guilt over everything she thinks her mother lost by having to raise her. She doesn’t want to inflict that guilt on anyone else, so she is determined to remain single.

Well, now that I had my heroine, I needed a hero (I write straight contemporary—however, if you want recommendations for MM or FF, hit me up because I have several author friends who do it really well!). My hero needed to be the opposite of Anna. Enter Ben.

Ben loves love. Loves it so much, in fact that he’s been left at the altar TWICE! All around him are people who are settling down, including his cousin Max (from Whispers in Washington), whose wedding he has the honor to attend as the best man. And when he sees Anna, the maid of honor, he wants to get to know her better. No, it’s not insta-love, but the more time he spends with her, the more he likes her, and the more he wants to pursue some sort of relationship with her.

She loses an earring, which he finds. He loses a keychain and ticket stub, which she finds. And of course, since Better Together in Boston is part of the Ticket to True Love series, there is some magical spring water. Anna and Ben are thrown together often enough and...well, I’ll leave it to you to read.

But as a writer, it was a little more complicated for me. You see, I wanted to be sure Anna was likable yet strong. I didn’t want to offend people with her feelings toward kids and marriage. I didn’t want to trivialize the reasons why people legitimately decide to forgo marriage or having kids. And I wanted the conflict between my hero and heroine to be one that couldn’t just be solved with a conversation.

Let me tell you, this was a tough story to write. My first content editor was unimpressed. Oof. If you think writing while uninspired is tough, you should try editing what you wrote, knowing it needs a LOT of work, during that same time. This writing gig is not for the faint of heart or thin of skin.

But, eventually, with a lot of work and self-doubt and pep talks from author friends, I did it. I wrote a story I’m proud of. I wrote a story where the heroine comes into her own, does a lot of soul-searching, and realizes some key lessons in life. And the hero? Well, he had to learn a lot of lessons, too. And in the end, I think they’re perfect for each other.

Do you believe in the legend of True Springs?

Anna Levinson was raised by a single mother, who sacrificed her dreams to give her daughter a warm, loving home. Now a respected professor on the tenure track, Anna is driven to live the life she thinks her mother should have had. She's long since come to terms with the understanding that “having it all” is impossible if she wants a successful career.

He’s been told he’s Mr. Wrong more times than he can count…

Despite being left at the altar twice, Ben Diamond still believes his soul mate is out there. He’s ready to marry and start a family of his own. He just clearly won't recognize her when he does find her. And then he meets the maid of honor at his cousin’s wedding, and his world is thrown off kilter.

Settling down might be more than they bargained for.

A long-distance relationship isn’t what either of them has in mind, and Anna isn’t about to ruin another person’s dreams. However, giving each other up is harder than it looks. Can Ben convince Anna that she’s got him all wrong, and that he’s finally gotten it right?

Fall in love with Anna & Ben in this steamy contemporary romance.

“Would you like a drink of water?” he asked. “Or would you be more comfortable sitting on the chair over there?” He pointed to the window, next to which was a blue upholstered chair.

“You’re my drink of water.” She pulled his head down to her.

She kissed him, her lips soft, tongue plundering inside when he opened his mouth in shock. He needed to stop this, even as his body responded. Desire and honor warred with each other as heat bloomed. Her hands wrapped around the back of his neck, sending shivers down his spine. She was sweet, tasting of champagne and grapes. Her perfume was elusive, but there, and he pulled her closer, breathing her in. A breathy moan made him pause. He couldn’t do this. Since she wasn’t thinking straight, one of them needed to.

“Anna.” He groaned and unwrapped her arms from around his neck. “I think you’d be more comfortable over there.” He pointed to the chair. He’d certainly be less tempted.

“No, I’d be more comfortable with you.” She pulled his shirt until he had no choice but to lean down.

Her hair, thick and soft, had come undone. Despite his better judgment, he wrapped a curl around his finger, squeezed and released it, letting it slide against the back of his hand, feather-soft.

“We can’t do this, Anna,” he whispered, even as he became hypersensitive to her touch.

She pulled him close and once again, pressed her lips to his. He tried to push her away, grasping her by the shoulders, and for a moment, he thought he’d finally gotten through to her. She pulled back, before trailing kisses across his jaw and down his neck. With a half moan, half curse, he gave in. 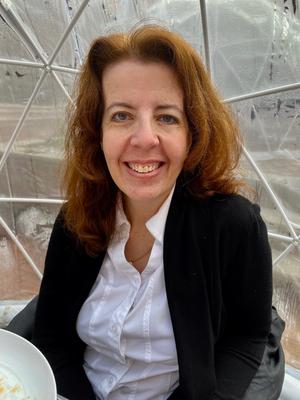 Jennifer started telling herself stories as a little girl when she couldn’t fall asleep at night. Pretty soon, her head was filled with these stories and the characters that populated them. Even as an adult, she thinks about the characters and stories at night before she falls asleep or walking the dog. Eventually, she started writing them down. Her favorite stories to write are those with smart, sassy, independent heroines; handsome, strong and slightly vulnerable heroes; and her stories always end with happily ever after.

In the real world, she’s the mother of two amazing daughters and wife of one of the smartest men she knows. She believes humor is the only way to get through the day and does not believe in sharing her chocolate.

She writes contemporary romance, many of which feature Jewish characters in non-religious settings (#ownvoices). She’s published with The Wild Rose Press and all her books are available through Amazon and Barnes & Noble.

Giveaway! One lucky commenter will receive an e-copy of Whispers in Washington, the first book I wrote for the Ticket to True Love multi-author series. Winner will be chosen at random, one week after this appears on the blog.

PLUS every comment is an entry in Lisabet's Pride Month giveaway, too!

Welcome back to my blog. I like the turnabout premise of this story. And the setting... I lived near Boston for many years, and actually in the city for about a year and a half.

Thank you for the giveaway, too!

Nice! Quite intriguing and excited to find out more! reneela2000(at)gmail(dot)com

Thanks so much for hosting me again, Lisabet! I have family outside of Boston, so I've visited many times. It's a great city!

Hi aerokorngal! Thanks so much for dropping by!

This sounds amazing! I added it to my wish list (come on payday!)) unluckythimble at gmail dot com

Sounds really good. Thank you for sharing with us. 😊jamilla0407@gmail.com

Annette, thank you so much for adding my book to your wish list. I hope you enjoy it!

Hi Jennifer, what a journey! So glad Better Together In Boston was the result. Happy sales - Anna T.S.

Great excerpt, Jennifer. I like the turnaround with your characters. And I totally get how uninspiring it's been to write this past year. Best of luck!

Loved learning about the process for your new novel. Great post! Wishing you all the best with the book, which sounds wonderful :)

Thank you, Anna! I always appreciate your support.

Thank you, Jana, and best of luck to you, too!

Thanks, DV! I appreciate it!

Making note of this book... thanks for sharing!

This sounds so good. Thanks
debby236 at gmail dot com

The cover model is so handsome.