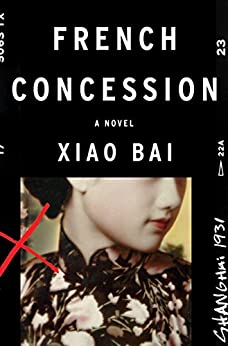 In 1931, Shanghai is a bewildering but exciting jigsaw puzzle of competing factions, ideologies and interests. Officially the Chinese Nationalists control the city from their base in Nanking, but Western powers rule in extraterritorial jurisdictions in the heart of the city: the International Settlement, domain of the British, the Americans and their allies, and the separate French Concession. Meanwhile, the Japanese are becoming increasingly aggressive, Communists are plotting to overthrow the Nationalists, gangsters and criminals operate with relative impunity, and adventurers from many nations exist in an environment of shady deals and sudden opportunities.

French Concession by Xiao Bai brings this complex and fascinating period to life. At the center of the novel is Hsueh Wei-shih, a young half-French/half-Chinese photographer who’s a magnet for trouble. Handsome and charming, Hsueh already has one mistress, a White Russian arms dealer named Therese Irxmayer, when he falls in love with Leng Hsaio-man, member of a secret Communist cell. Hsueh’s intelligence and imagination as well as his connection with Leng bring him to the attention of Lieutenant Sarly, head of the Political Section of the French Concession Police, who more or less forces Hsueh into the role of spy and informant. But somehow the dashing and resourceful photographer also wins the trust of Leng’s superior, cell leader Ku Fu-Kuang, as well as the mobsters of the Green Gang and officials in the Nationalist police. As he navigates the increasingly dangerous waters of his multiple roles, he’s driven neither by political ideology nor greed. His main goals are to stay alive and to protect the two women for whom he cares.

I picked up this novel second-hand, partly because I’m currently studying Mandarin and have visited Shanghai. It took a while for me to get hooked on Hsueh’s story. There are dozens of characters (helpfully enumerated at the start of the book) and much of the historical background must be inferred from the action. Like Hsueh himself, though, the novel is seductive. The main character (I’d hesitate to call him a hero) has a conveniently laissez-faire mentality as well as a deep-seated desire to please. This allows him to forget his duplicity and be convincingly sincere, in whatever circumstances or company he finds himself. His double-dealing love life barely concerns him. As in the old song, he loves the one he’s with. This is true politically as well.

Although Hsueh’s actions hold the book together, many chapters take the perspective of other characters. This lets us see that every character views himself or herself as the central figure in the story. Ku, for instance, considers he’s the true representative of the Communist Revolution. Secretary Chen, a secret Communist though part of the Nationalist Government, sees Ku as a crook and an imposter. Only Hsueh Wei-shih, the chameleon, is whatever his runners want him to be – and whatever role he’s playing, he believes in himself.

French Concession is an intriguing and original novel that should appeal to anyone interested in or experienced with Asia. The boom town quality of pre-WWII Shanghai felt familiar to me. When I lived in Bangkok in the 1980’s it had some of the same vibe. Everyone had an official story; no one could be taken too seriously.

I was also reminded of John le Carré’s fiction, although Xiao Bai’s style is very different. Both authors highlight the ambiguities that arise in the shadow-world of espionage. Both offer characters who are not fundamentally evil but who perpetrate great wrongs in the name of expediency.

Having finished reading, I found one last delight awaited me. In the notes at the end of the book, the author reveals that Hsueh Wei-shih, Lieutenant Sarly and several other characters are actual historical personages. He takes us on a quick tour through the scraps he’s found in the official archives, particularly a photo of Therese taken by Hsueh himself. Xiao Bai is quick to assert that the novel is fiction, but its historical roots make it all the more compelling.