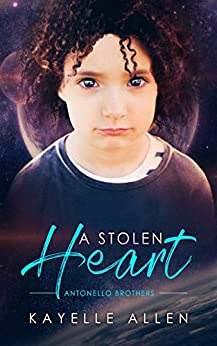 A Stolen Heart by Kayelle Allen

Luc Saint-Cyr is an immortal warrior, a master thief, a savvy businessman, and the loyal supporter of Pietas, king of the Ultras. He plays the role of dedicated Sen’dai – teacher and guide – to his Deshai, young apprentices in the Thieves’ Guild. One thing he’s never been, though – has never considered being – is a father.

When he rescues a kidnapped half-human, half-alien three-year-old from the clutches of corrupt officials within the Guild, however, he can’t resist the desire to protect and nurture the brave, clever and endearing child. For centuries, Pietas has been promising Luc a lifetime he can live for himself alone. Gradually he comes to realize that he wants that life to include being “Senthys’ Daddy”.

The Half-Kin child, spurned by the feline mistresses of his native planet, turns out to be a pawn in a desperate intergalactic plot that involves Luc’s oldest enemy. Immortals know that loving a Mundane will only bring eventual pain when the human’s short life is over. If his ambitious nemesis Phrei has her way, though, Senthys might not live beyond his childhood.

Kayelle Allen has been writing tales of the Tarthian empire for at least fifteen years. One of her earliest novels in this universe, At the Mercy of Her Pleasure, featured Senth as a young man, an exceptionally adept thief practicing his craft in the service of a sexually enhanced “Better”. In her recent work, Ms. Allen has been filling in the back stories of Senth, his half brother Khyff, and Luc Saint-Cyr himself. She has woven a complex set of relationships with Pietas, the “Bringer of Chaos” and his domineering sister Destroiya. I don’t know this for sure, but I have a sense that the author is continually discovering, or creating, these connections as she explores her own fictional worlds.

The results are sometimes fascinating, but equally often struck me as confusing and distracting. The core conflict in this book is the disconnect between who Luc is and the feelings he has for Senthys. Ms. Allen does a wonderful job depicting the child’s remarkable abilities and winning ways, and exposing Luc’s softer side as he falls in love with the boy. Obviously she needed an external threat as well, and Phrei’s attempts to obtain the technology for teleportation fills the bill. However, many of the scenes between Pietas and Luc seemed gratuitous. Their centuries-old relationship and the ambiguous feelings they have for one another are interesting in their own right, but did not seem to belong in this book. Even more aggravating were the repeated references to Six and Mahikos (characters from the Bringer of Chaos series). I haven’t read those books, though I’ve followed Ms. Allen for a long time and indulged in many excerpts. The relevance to this novel seemed tenuous.

Balanced against these annoyances is the author’s skill at developing complex and satisfying characters. I particularly enjoyed Shohn Lexius, the full Kin security agent who has left Felidae because she doesn’t agree with its gender politics. Flea and Gnat, two senior, veteran human members of the Guild whom Luc enlists in the fight against Phrei, are equally delightful. Ms. Fasra, Senth’s beloved teacher from Felidae makes a late but memorable appearance. Even the androids have surprisingly well-defined personalities.

Overall, I enjoyed A Stolen Heart. However, I think I would have liked it even better if the author had been more selective about dragging in references to other tales of the Tarthian empire. The richness of her fictional world is impressive. An attempt at tying all the historical threads together in a single book is bound to fall short.

Thank you, Lisabet. I appreciate the insight! :)