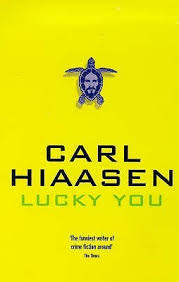 Once a week, veterinary technician Jo Layne Lucks stops at the Grab ‘N Go convenience store in tiny Grange, Florida to purchase a lottery ticket. Her numbers never change; each represents one of the five failed relationships in her life. She figures she should get something from those losers. When she actually hits the twenty eight million dollar jackpot, though, she discovers that her good luck comes at a high price.

Two white supremacists from down-state played the same numbers, so the prize will be split. However, Bode and Chub aren’t satisfied with just fourteen million. They’re determined to have the whole pot, especially when they learn that the owner of the other ticket is a Black woman. Bode and his henchman plan to use the lottery proceeds to finance the White Clarion Aryans, the militia Bode has founded to combat the imminent invasion of Nato troops from the Bahamas. They have it on good authority that the blue UN helicopters will land any day, to hand America over to the dark-skinned foreigners who’ve overrun the country. Hence, they feel more than justified showing up at Jo Layne’s house, giving her a savage beating, and stealing her lottery stub. They get the ticket, though neither escapes unscathed from Jo Layne’s ferocious efforts at self-defense.

Tom Krone considers himself a serious journalist. He’s sick of writing trivial human interest stories for the local paper that employs him. When his editor sends him to Grange to interview the young woman who has just won fourteen million dollars, that’s the last straw. He quits his job, but somehow ends up in Grange anyway, fascinated by the tough, principled and attractive Jo Layne. Together, they track down the racist bullies who assaulted her. The wild, dangerous chase gives them a chance to get to know and trust one another – but there’s a very real chance that when they finally corner the vicious, well-armed villains, their luck will run out.

Carl Hiaasen’s Florida-based novels have been called “crime fiction”, but I see them more as social satire. However you label them, his books offer outrageous hilarity layered over a strong moral compass. Lucky You is fantastically entertaining, with tight plotting, snappy dialogue and lots of quirky, vividly drawn characters. Aside from Jo Layne, Tom, and the villains, Lucky You introduces us to Amber, the clever, sexy Hooters waitress who so entrances Chub that he has her kidnapped; Katie the judge’s wife, a devout Catholic who has a passionate fling with Tom then feels morally obligated to share every detail with her husband – leading the jealous judge to arrange Tom’s murder; narcissistic actress Mary Andrea, Tom’s estranged wife, who’s hiding out in Montana to prevent Tom’s lawyer from serving her divorce papers, because nobody in her family has ever gotten divorced; Shiner, the none-too-bright convenience store clerk who’s sucked in to Bode’s and Chub’s nefarious plot, but saved by Amber; a gaggle of Grange townsfolk, who make their living by manufacturing religious manifestations like a crying Madonna and fake stigmata; and Moffitt, the savvy “Man in Black” federal agent who’s futilely in love with Jo Layne.

Hiassen shows insight into and sympathy for all of his characters, even the bad guys. That’s one reason why this is such a feel-good novel. You can almost see the author shaking his head at Bode’s and Chub’s vile antics. They ultimately get what they deserve, a fate one wouldn’t wish upon anyone. Hiassen’s universe is simultaneously random and orderly. Characters reap what they sow.

Female characters dominate the narrative, Jo Layne and Amber in particular. They both understand the power of feminine allure, but ultimately prevail more through brains and bravery than beauty. Though Tom is officially the hero, he’s mostly dragged along for the ride, compelled by his feelings for the impetuous veterinary technician. Many of the other male characters (for instance, Tom’s editor Sinclair and Domenick the religious scam artist) end up seeming slightly ridiculous. Still, Hiaasen is never mean or petty. In his fictional Florida, everyone has his schtick, and that’s okay, as long as nobody gets hurt.

I should mention that Florida itself is a sort of character in this novel. I don’t know the state well at all, but Hiaasen portrays the place as a natural wonder at great risk from its inhabitants. A good bit of the action takes place on the wild, deserted islands in Florida Bay – still enough of a wilderness (at least when this book was published, in 1991 originally) that a man stranded on one is more or less condemned to death.

Despite the fact that Lucky You was published almost three decades ago, it doesn’t feel at all dated. Alas, the pernicious sentiments and beliefs displayed by Bode and Chub are more prevalent now than ever. Fortunately, Hiaasen’s not interested in penning a political rant. He allows readers to draw their own conclusions.

If you’re looking for some laughs to take your mind off the Covid-19 situation, get yourself a copy of this book – and count yourself lucky.

I've read some of his other books, but not this one. Thanks for the rec! I'll add it to books I want to get from the library--when it opens.