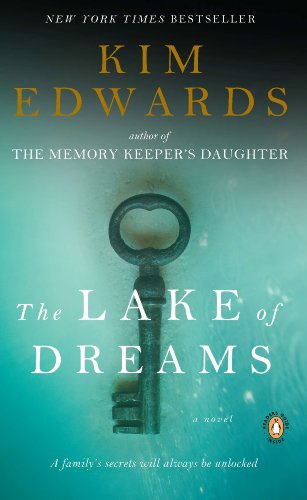 The Lake of Dreams by Kim Edwards
Penguin Books, 2011

The summer after high school, Lucy Jarrett left The Lake of Dreams, the lovely upstate New York town that had sheltered her family for four generations. Heading west to college, she left behind her grieving mother, her half-Seneca boyfriend Keegan Fall, her hostile uncle and cousins, and her aching suspicion that she was partly responsible for her father’s recent death. Now, after more than a decade traveling and working around the world, she has returned to the rambling, time-worn lakeside house where she grew up.

She finds that much has changed. Her mother has a new male admirer and is considering selling the deteriorating mansion. Keegan is a successful craftsperson with a five year old son. Her brother has reconciled with and is working for her uncle. The military installation on the lake shore has closed, and conflicts about the fate of this fragile, valuable land are tearing the town apart.

Unemployed, restless, confused about her feelings for her family, the town and the half-Japanese lover she left back in Tokyo, Lucy stumbles upon a cache of objects locked in an old window seat that point to a mystery: a great aunt who lived nearly a century ago, who had been completely erased from the family records. Rose Jarrett fled from England to the US in the early years of the twentieth century, pregnant with the child of a wealthy landowner who paid her passage to make her disappear from his life. Grudgingly welcomed by her relatives in The Lake of Dreams, Rose gave birth to a beloved daughter Iris, but was forced to leave her when Rose became involved with the women’s suffrage movement. Iris grew up without knowing her mother at all.

Lucy becomes obsessed with uncovering the truth about Rose’s life and determining the fate of her daughter. Her inquiries parallel her personal soul-searching about her own life and her future. Somehow, uncovering the long-hidden secrets of Rose’s history and bringing the woman’s heroism and self-sacrifice to light become a path for Lucy to save herself.

The Lake of Dreams is a gorgeous book, lyrical and moving. We see the town through Lucy’s observant eyes, filtered through her love of nature and colored by her memories. Rose comes to life through the intimate letters Lucy discovers, letters Rose penned to her daughter but never sent. Her story ramifies and pulls others into its web, including a famous stained glass artist who created a stunning set of church windows celebrating the power of femininity. I found myself waiting breathlessly for the next revelation about Rose’s past and her legacy to the future.

At the same time, when I finally put the book down, I realized the plot was somewhat contrived and unrealistic. It’s too easy, ultimately, for Lucy to bring Rose back from obscurity. The epistolary record is too convenient, too complete. The startling twist near the end of the novel and the rather implausible happy ending were emotionally satisfying but intellectually a bit of a stretch.

Also, I felt that Lucy ended up with the wrong guy. I always laugh at romance reviews that complain about this sort of thing, but in this case, I felt quite strongly that she made the wrong decision, or at least, not the decision I would have made.

Of course, I’m not going to tell who she ultimately chooses, or what path her life takes. You’ll just have to read the book yourself.

Posted by Lisabet Sarai at 8:58 AM