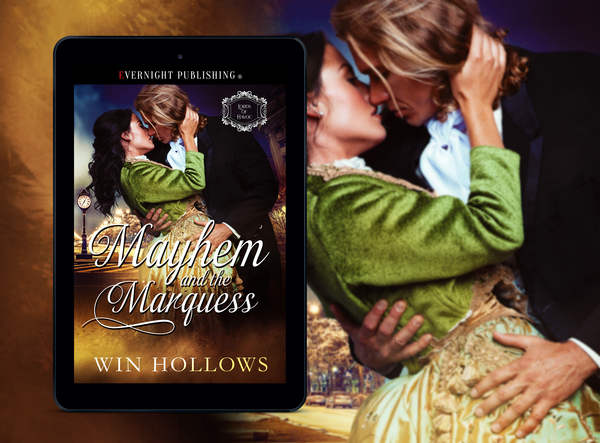 Daughter of an infamous murderer, Ivy Wollard now wields knives instead of needlepoint to survive in a society where no one wants her. When the Marquess of Blackbourne comes along and ruins her chance at a better life, she decides she’d rather have her toes eaten by eels than agree to his proposed scheme. There’s no way her surrender has anything to do with the mesmerizing angle of his jawline or the wicked twinkle in his eyes.

But Asher Blackbourne has a secret. He knows it’s just a matter of time until he goes mad and loses his illustrious title, so when Ivy falls into his path, he realizes he could use her to keep his house of cards from falling down. If every illicit touch between them doesn’t drive him mad first, that is.

Yet Ivy cannot escape her grisly legacy and the dark desires of her father’s admirers. What if violence runs through her veins, and no one who gets close is safe? Mayhem will descend as this rake finally falls for the enigmatic woman who might be just his brand of poison…Er, cure, of course.

“That was my favorite pen,” Blackbourne remarked in a low tone, looking at the broken quill and ink flooding the polished wood surface of his desk and nearby papers. He rose suddenly from his chair, forcing Ivy to back away a step until her derriere came up against the edge of the desk.
She gasped as his full height loomed over her. Her hands grabbed the edge of the desk as his legs pressed into her skirts.

Perhaps she had gone a bit too far.

“I liked that pen,” he purred, his hand coming up to stroke her face.

“Are you going to replace my pen?”

“Are you going to un-read my letters?” she replied, trying not to stare at the way his lips moved as he spoke in the smoky voice that strummed along her nerves like a cello’s bow.

He let out a bark of laughter. “Perhaps it’s too late to stop for either one of us,” he said, and Ivy knew he spoke of things other than pen and paper.

“It’s been too late for a long time,” she breathed, the fabric of her dress chafing the puckered tips of her breasts as his chest came up against hers.

His eyes flashed as he pressed her further backwards, hands positioned flat on the desk on either side of where he had her trapped. “I’m going to ruin your dress now.”

Ivy sucked in a breath as he lifted her onto the desk, ink smearing over her skirts and the palms of her hands. She didn’t mind that outcome one bit… 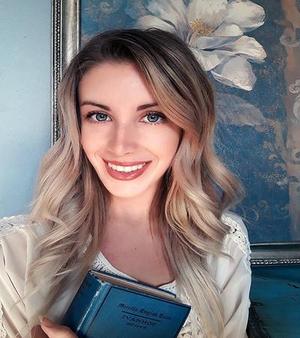 Win Hollows is a multi-award-winning romance fiction writer who still believes that love conquers all. She currently lives in Colorado with her own real-life hero and their three fur babies. Her passion is writing stories about love and intrigue and will continue to do so as long as characters keep having conversations in her head. Hollows’ other interests include traveling to places with delicious food and languages she can’t speak, having wilderness adventures, and, of course, reading! She loves connecting with readers and fans on Facebook, Instagram, and through her website at www.winhollows.com.

Win Hollows is giving away a $10 Amazon/BN GC to one lucky reader during the tour.


a Rafflecopter giveaway
Posted by Lisabet Sarai at 8:21 AM

This sounds like great fun! A heroine who's the daughter of a murderer!

Thank you for hosting, Lisabet! I hope you get a chance to enjoy the book, as it was a lot of fun to write!