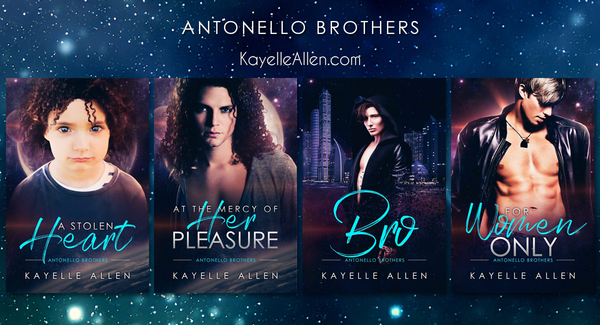 After recently reading and reviewing Kayelle Allen’s latest novel, A Stolen Heart, I found I had a lot of questions about the book and the elaborate universe in which it’s set. Kayelle kindly agreed to an interview, so I could ask them!

Lisabet : I’ve known you online for more than fifteen years. You’ve been writing stories about the Tarthian empire the whole time. Tell us about the origin of the Tarthian empire – where the ideas came from, not the origin myth within your fictional universe. How did your notions develop? How much of what you “know” now (and what you’ve shared in your recent Antonello Brothers books) did you know when you got started?

Kayelle: When I was seventeen, I had a nightmare about walking down a seemingly endless walkway in a huge throne room. At the end of the room was a woman on a throne, and I knew she was waiting for me. Her brother was missing, and she needed my help. The room was the size of a cathedral, and it was packed. Row after row of soldiers stood facing her, waiting. It felt like I walked forever but got nowhere. Finally, I decided to turn and look back, to see how far I'd come. When I did, the soldiers all looked at me, and I saw their faces for the first time. All of them had the heads of white cats.

I woke up instantly, and my heart was racing. Why I was so frightened, I don't know. No one was threatening me, but the alien aspect frightened me deeply. I also knew I had to find her brother. Why he was missing, I didn't know. That's the nature of dreams. But all of my Tarthian Empire series has come out of that.

L: How did you get the inspiration for Pietas? I have a feeling that from a creative perspective, he’s a relatively recent arrival. (Of course, I might be wrong. Sometimes characters nibble at our consciousness for decades.)

K: I probably don't have to tell you that the missing brother I dreamed about was Pietas. I didn't know his name right away, but it didn't take long to figure out. When I get a character's name, I get everything about them at once. It's quite bizarre. Until I know their name, I can't write them. There's no such thing as using a placeholder like Joe. I have to know the name because the name IS who they are. Like Pietas. His name means piety to one's parents, children, relatives, country, benefactors, etc. It's also one of the Greek virtues and denotes respect and love, especially toward fathers. I had no idea about those meanings. I had read a book where a character was named Pietr. I loved the look of the name, and decided I'd use a form of it. It wasn't until 40 years later that I discovered the other meanings. It struck me as funny, because Pietas loathes his father with every fiber of his being. That man is what drives Pietas to better himself and be a good king.

L: What made you decide to go back in time and explore Senthys’ and Khyff's early life?

K: In the first Antonello Brothers book, At the Mercy of Her Pleasure, Senth and Khyff have only just met. I always wanted to do a story about how they got together. So I wrote a story called Bro, in which they are introduced to one another, and there's a scene where Senth and his father (Luc) have each gotten a cloak through the Thieves' Guild that will make them virtually invisible. When Senth goes to get his, Luc puts on his own. When Senth comes back in, Luc scares the dickens out of him. It's a funny scene ,but there's a moment when Luc remembers his son at age three, right after he'd adopted him. His tender memory of playing hide and seek with Senth was the catalyst for A Stolen Heart. I'd like to do another story that takes place between that book and Bro. But it will be awhile. I have another Antonello Brothers story planned in which they discover they have an older brother. That's on the horizon and I hope to finish it soon.

My next planned book is Surrender Trust, the sequel to Surrender Love. It's MM and features Luc finding his forever love.

L: In A Stolen Heart, you make it clear that Luc and Pietas were lovers in the past. Have you written about that in any of your novels? Do you plan to?

That said, Pietas believes Luc is his forever love and he has no intention of giving him up. So when I write Surrender Trust, Pietas is going to have to face losing him. The immortal king does not give up a fight until there's no possible means of winning, and he's been known to keep fighting even then.

L: Given that you’ve created an entire planet of felinoids, I have to ask: are you an ailurophile?

K: I do love cats. I love dogs too. I have no pets currently, though. I will happily spend an hour watching kitten and cat videos. I'm on Instagram, and there are plenty on there, believe me.

A Stolen Heart by Kayelle Allen


When he rescues a half-human orphan, a glorified space pirate turned entrepreneur sets in motion a chain of events that threatens to topple the powerful Thieves' Guild he once led.

Multiple layers of conspiracy unfold, reaching all the way to Luc's immortal ex--the king. Behind each solved mystery looms an unseen foe, undoing the good Luc accomplishes. For the sake of this child, Luc must postpone his own freedom and master his desire for revenge or he will violate an ancient vow. Worse, he'll put the toddler at risk.

At war with his compassion for the vulnerable child, loyalty to the king, duty to the Guild, and the bright lure of freedom he's coveted for centuries, Luc seeks the right path. Will he choose liberty and unparalleled success, or restore the Thieves' Guild to its former glory while overseeing the child's training?

A hard choice for any man. For an immortal whose inner monster can destroy on sight? Impossible.

A pirate with a monstrous past can never be trusted with an innocent child. Luc must ensure the child is protected, safe, nowhere near danger. Nowhere near him. Even if this little boy has already stolen his heart... 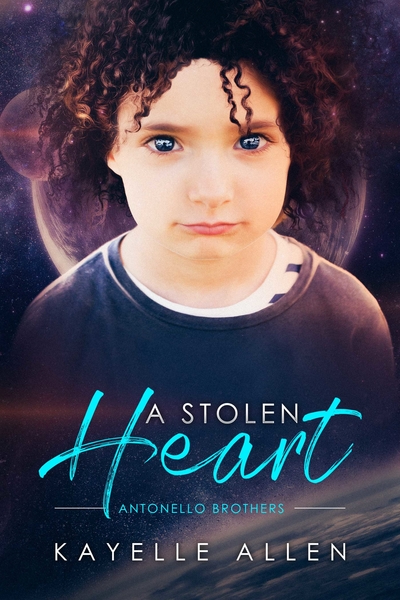 A former space pirate who's gone straight rescues a vulnerable child adept at breaking into things.

This edition comes with a 50+ page bonus book. I'm a hobby artist and love finding ways to illustrate my books. The bonus includes multiple images of characters, places, and items. I do not have skill for certain technical drawings, so I employ a graphic designer when needed.


In this short peek, Luc is meeting with the king, Pietas (his ex), after not seeing him in person for several years.

Pietas scooted in closer and then slipped one hand across Luc's shoulders.

"Surprised I'm here?" Pietas slid that hand down Luc's back.

The man's touch had no right to feel this good. Twisting toward him, Luc cleared his throat. "Yes. I worried something happened."

"I'm touched." A playful smile lit Pietas's face. "You worried about me?"

"I worry whenever you do something different."

"Let's see." Luc ticked items off his fingers. "Send troops over a border. Incite a riot. Invade a planet. Invade some king's daughters. Or his sons... Shall I go on?"

Pietas chuckled. "You worry a lot."

To increase his personal space, Luc adjusted the hang of his jacket. "You're in a good mood."

"Yes, yes." Pietas brushed a dismissive hand through the air. "I haven't triggered a war, if that's what you're fretting about. I'm not sending you out of the Empire, and I'm not planning to feed you to my cat."

"No," Pietas agreed, with a bemused expression. "Although if there's someone you want to be rid of..." He lifted one brow.

"No, no, quite capable of making people disappear on my own, my lord, but I'll keep a personal dose of panther justice in mind."

"Panther justice!" Laughing, Pietas laid a hand on his chest. "How I've missed your sense of humor. I don't recall the last time I laughed out loud." He looked down, toying with a turquoise ring.
The fat nugget of fractured stone occupied his left forefinger. The silver setting evoked a dragon's open mouth, a gift from Luc hundreds of years ago. Pietas rarely removed it.

Did he cling to their past relationship, or wear it to show Luc he hoped for the future? Either way, Luc could not reconcile being with this man with the desire for freedom. To give birth to one meant the death of the other. 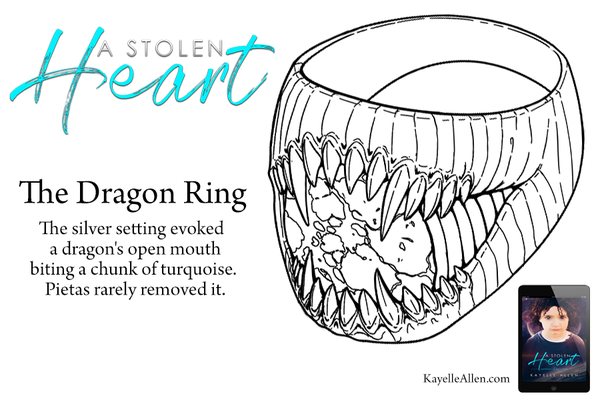 This is fascinating, Kayelle! Now I really have to go read the Pietas books, to fill in some of the blanks.

Thanks so much for being my guest and putting up with my questions.

I was so busy sharing this post I forgot to comment. :) Thank you for having me over to your house. I love sitting down to talk about books. Let me know when you delve into the Chaos series. I'd relish a chat about Six and "Pi" as Six calls Pietas.

What a great interview! I loved A Stolen Heart!

Thank you, Dee. I'm glad you enjoyed this story. :)