They’d buy her, free her, and persuade her to have werewolf babies - #Paranormal #Werewolves #Spanking #Post-apocalyptic @KryssieFortune 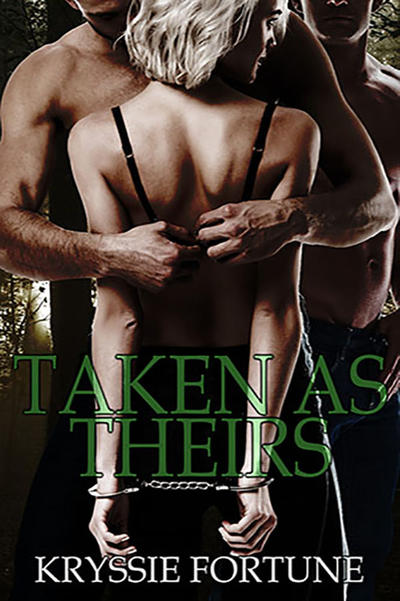 As a breeder - one of the few fertile women left in a ruined, plague-ravaged world - Cassie would fetch a handsome price at auction, and selling her to the highest bidder was exactly what her captors had in mind... until two fearsome beasts decided to take her for themselves.

Eli and Dane have chosen Cassie for their mate, and when she makes a foolish attempt at escape she quickly ends up tearfully promising obedience as her bare bottom is soundly and shamefully punished. Her body's response to their stern dominance cannot be denied, however, and it isn't long before she is screaming out her intense, helpless pleasure as she is roughly and thoroughly claimed. But will Eli and Dane's pack accept a human girl or will Cassie be an outsider forever?

Or READ FOR FREE ON KINDLE UNLIMITED
Excerpt
A tic started in Dane’s jaw. When he took a deliberate step toward her, Cassie panicked and ran for the door. Grabbing her around the waist, Eli dragged her toward the bed. He perched on the edge and pulled her over his knee. “A bare bottom spanking should remind you not to put yourself at risk.”

She hung, head down, feet kicking as she tried to break free. Eli planted his huge hand in the small of her back and pinned her in place. His touch felt like a warm caress that leached the fight out of her.

When he stroked his free hand over her bottom, her cunny dampened. His voice turned raspy and hoarse, as though he struggled to speak. “When I’m done, Dane will punish you for making him dive into that swell. Those waves could have battered you against the barge or washed you away. Your actions were inexcusable, whatever your motives.”

He shoved the baggy jumper he’d loaned her up around her waist, baring her bottom.

Hissing in a breath, she kicked and struggled, desperate to escape his grip. He tangled his legs through hers and stroked her bare bottom. “Stay still, princess, or I’ll double your punishment.”

Cassie’s head-down, bottom-up position made her feel defenseless and weak. No one, not even her parents, had ever laid a hand on her. Even in human form, werewolves were super strong with enough stamina to keep them going for days. Hell, if he hit her too hard, he could shatter her spine. She’d been an idiot to think these dominant males had a kindly side.

Cassie lifted her head and tried to catch Dane’s eye. For all his stern exterior, he could stop Eli from spanking her—she hoped. “Please don’t do this. I’m sorry. I was stupid, okay? Isn’t it enough that the pair of you scared me half to death yesterday when you busted me out that castle? Now you’re going to beat me for trying to get away from killer werewolves. I’m begging you. Let me up, please.”

Dane surprised her by crouching beside her and smoothing her curls back from her face. He gathered her wrists in one hand and stared into her eyes. “We’re sorry we scared you when we sprang you from the vampires. Not that you gave us much choice. I’m going to stay beside you while Eli spanks you. Keep your eyes on me.”

She’d thought Dane was the stern one who’d do anything to get what he wanted. The way he reassured her helped, but she still wriggled and kicked to get free.

Kryssie lives by the beach and loses track of time when she writes. Her days are full of dashing regency rakes, former soldiers so handsome they make her drool, and the sexiest werewolves ever. The odd vampire makes it in there too, but when he does, he’s drop dead gorgeous.

Her pet hates are unhappy endings and cliff hangers. She guarantees you won’t find either in her books. Her books sizzle with sensual heat, but story always comes before sex. Even when part of a series, her books can be read as stand-alone romance.

If one werewolf is good, two must be better, right?