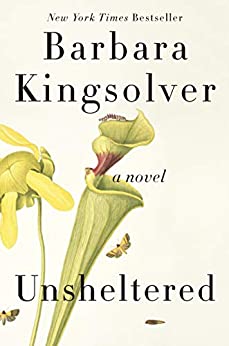 This is not supposed to happen in America. After working hard for decades, paying your taxes, bringing up your kids to be good citizens, you’re not supposed to find yourself destitute and close to homeless. Yet that’s the situation in which journalist Willa Knox and her professor husband Iano find themselves, when her magazine folds, the university where he’d finally got tenure closes, and they’re forced to move to a century-old house that’s literally crumbling around them. With no income and little savings, they’re only a few weeks away from living on the street.

The house, a legacy from Willa’s aunt, is part of the former Utopian community of Vineland, founded by a wealthy businessman who was either a visionary philanthropist or an egotistical despot, depending on who you believe. Its leaking roof, moldy walls and rotting floors also provide the shelter of last resort for Iano’s bigoted curmudgeon of a father, slowly expiring from multiple chronic diseases, and their radical socialist daughter Tig (Antigone). As if that were not enough, Willa also finds herself forced to take in a newborn baby boy when her son Zeke’s upper class girlfriend kills herself. Living hand to mouth, camping out on the ground floor of the old house as one room after another becomes unsafe, Willa wonders how the family is going to find their next meal, let alone deal with grandfather Nico’s health issues.

Meanwhile, more than a century earlier, another family struggles to make a life in Vineland. Thatcher Greenwood views himself as fortunate. Though he grew up in poverty and hardship, somehow he managed to snag the hand of lovely, elegant Rose. A self-educated scientist, he has been hired to teach in the Vineland school. He hopes he can support not only his beautiful and somewhat demanding wife, but also her mother and her teenage sister Polly, and make enough to repair their deteriorating dwelling. However, his ardent belief in the controversial evolutionary theory of Charles Darwin sets him on a collision course with the conservative powers in Vineland – a course that could easily lead to his dismissal. His growing friendship with his next door neighbor, amateur naturalist Mary Treat, is the only bright spot in his increasingly difficult existence.

As you might imagine from this brief description, Unsheltered is an ambitious novel with a broad scope. It touches upon many important themes: family ties and conflicts, man’s role in nature, social inequity, preserving history, physical and mental illness, and of course love. I say “of course” because ultimately that’s the only path that leads out of the morass: love for your partner, for your children, for your neighbors, for humanity.

Like all the Barbara Kingsolver books I’ve read, this one is rich with emotion, often painful. Life isn’t easy. Tragedies are to be expected. Yet somehow we manage to pull through.

The structure of the book is strongly parallel, to the extent that it felt somewhat contrived. The chapters alternate between the present (well – 2016, during the last presidential election in the U.S.) and the past. The last words in one chapter become the title of the following chapter. Other Kingsolver novels I’ve read felt much more relaxed and free-wheeling. In this book, it’s clear, the author has specific points she wants to make. Willa and Thatcher share many characteristics, as they inhabit the same space a century apart. In some ways the world has not changed; the same voices that excoriated Darwin in the nineteenth century condemn the warnings of the climate scientists in the twentieth.

I personally agree with most of Ms. Kingsolver’s positions, but I think I would have enjoyed Unsheltered more if it had been less blatantly political.

The characters in Unsheltered are wonderful, especially Tig, the dread-locked rebel who finds herself holding the family together, and the quietly self-directed Mary Treat. All of them grow and change, individually and in their relationships with the others. Meanwhile, as always, Ms. Kingsolver writes beautifully, the sort of prose where you find yourself going back to re-read a page just to savor its beauty. The book has a pleasingly unexpected ending, as long-nurtured hopes crumble but new possibilities appear. There’s not exactly a happily ever after, but you have the sense that Willa and her tribe will make it through. And after some of the more harrowing aspects of the book, that feels like a triumph.