You might be shocked. You might be aroused. Sample these two tales of forbidden love from Bianca Swan – if you dare!

Alain and Alina Alastair are a scientific miracle--identical male-female twins--a biological impossibility. Their lives are destined to be different. They discover love, lust, and danger lurking in their future. The secrets at their isolated, island home threaten to undermine the very foundations of their world—and their lives.

Rory rushed him, grabbing his shirt, his fist drawn back to strike. The horses snorted, hooves scrambling on cobbles. Aiden Alastair strode into the barn hall, assessing the situation at a glance.

“By all that’s holy,” Aiden shouted, “have you both taken leave of your senses?”

Rory freed Alain with a little shove. “I’m rearranging your son’s pretty face. You’ve said Alain is too pretty for his own good.”

The old, familiar humiliation and pain twisted in Alain, but he squared his shoulders, and with blood on his mouth, faced his father.

Rory’s lips curled in a mocking smile. “I was just trying to help you out, Lord Alastair.” He gave the title hateful emphasis.

Alastair crossed his arms, glaring at his son-in-law. “You’re my daughter’s husband and as such this is your home, but I won’t tolerate fighting beneath my roof.”

Rory hung his head, looked down, said nothing. His rigid posture sagged.

Father’s eyes found Alain. His expression altered from angry to hurt. “I would have expected more of you. Did you start this?”

Of course, his father had jumped to the conclusion that Alain was to blame. He was always ready to believe the worst about him. He could tune them out, suppress his feelings and stoically endure. But not this time. Damage, like love and hate, came in degrees. All his life Alain had suffered at this man’s clumsy hand. He arched an eyebrow.

“You’ve always been disappointed in me, Father.” The chill in his voice bled into his limbs. “But frankly, I don’t give a damn. Never have. Never will.”

Splotches of anger dotted Father’s face. “How dare you say that to me? You’re a damned fine excuse for a son. If I could, I’d pass the title to Rory.”

The painful attack knocked the wind out of Alain. To be told he meant less to his father than another man hurt. He hadn’t believed Father had the power to break his heart. He collapsed on the wooden bench beside the bridles and stared at the old oriental carpet he used for polishing Spirit’s hooves. Suddenly, he hated the wealth surrounding him.

“Aiden.” Mother strode down the aisle, seized her husband’s arm and shook him. “I overheard. How could you be so cruel?”

“It’s all right, Mother.” Alain climbed to his feet. “It’s no surprise.”

“No, it isn’t all right.” Mother glared into Father’s eyes. “You were angry. You didn’t mean what you said. Tell him, Aiden.”

Alain unsaddled Prospero, led him into his stall and slid the leather halter off his beautiful head. Father remained silent as he repeated the performance with Spirit. The pain hit him like a lightning strike. His solar plexus blazed into an aching knot. Clutching the apex of his ribs, he staggered against the door.

Light from the world outside framed Nye. The old man gazed at Alain as if he was the only person in the hallway. “Alina.”

At the sound of her name, the pain twisted tighter and hotter. Agony folded Alain double. Mother took a step toward him. He waved her away.

“Hurry,” Nye said, standing aside as Rory shouldered past.

Mother dashed behind Rory, Father at her side.

“How did you know?” Alain asked the servant.

Nye’s gaze shifted to the floor. “I heard her cries.”

Alain shook his head. “What were you doing on the third floor? You weren’t, were you? How did you know?”

“Go to her. Your sister needs you more than she needs the others.”

The pain in his lower abdomen slowed Alain, but he caught his parents on the second landing. A soft footstep sounded behind. He glanced over his shoulder. The old man followed them up the stairs, worry pinching his face.

Loud, piercing screams interspersed a terrifying quiet. Rory jerked the door open, flung himself into their bedroom. Alina wasn’t on the bed. A strangled cry launched Rory into action. He strode to the bathroom, halted in the doorway. 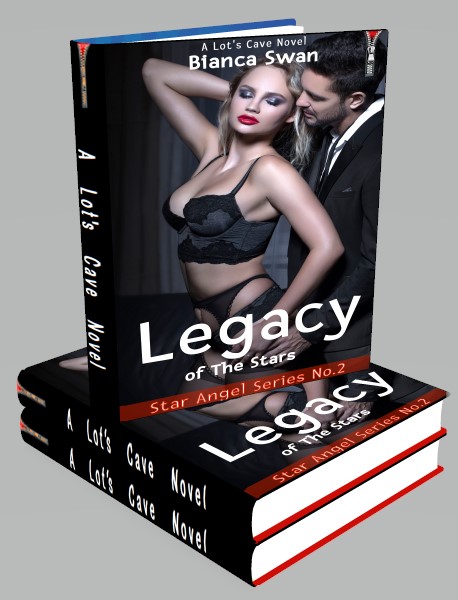 Legacy of the Stars

A brother finds his sister to be the most desirable woman in his life. Asher and Lily dance around committing the forbidden act while their need for each other grows. Again and again, they narrowly escape being caught, but once they have begun their passionate affair, they can’t stop. When his mother tells Asher a secret about his birth, he must choose between his legacy and his Lily.

I smiled, studying her as if she were some long-lost treasure. She gazed into my eyes. I couldn’t look away. Or simply didn’t want to—ever.

She stroked my hair, and a sleepy arousal awakened. I ran both hands through my hair, elongating my body, teasing her as she teased me with her flirty gestures. Her gaze drifted over me from my chest down my body, up my legs to linger on my cock, sculpted in denim.

“Look at me, Asher. It feels so good when you look at me like that.” Dangerously seductive, but oh how I loved it and wanted her.

With a hot gaze, she stripped her t-shirt dress over her head and stood naked, beautiful for me to worship. Her breasts were high and firm. From her slender waist, her hips flared in a sexy curve. Her legs were long and silky. I remembered them locked around me, and my cock hardened.

Raw animal magnetism sizzled between us. If we’d wanted to stop, I’m not sure we could have. Only the sound of the door would halt my forward advance.

I held her gaze as I walked slowly toward her. “I’m coming to claim you.”

When I arrived, it seemed I’d made the longest but sweetest journey of a lifetime. I laid my hands on her shoulders but didn’t yet try to kiss her. There was so much I wanted to say before we made love, but her tremor of acceptance sent electricity zinging through me. I shed my t-shirt and jeans, joining her dress in a colorful spill. She ran her hands beneath her tits and pointed the hard nipples at me. Her lower lip  quivered, but I didn’t sense any reluctance in her stance or her smile. I looked down at the solid bar of flesh standing at attention between us. She winked, stepped close, took my erection in her hand, messaging it gently.

“Are you happy?” I whispered.

Thank you for hosting my books today. Bianca