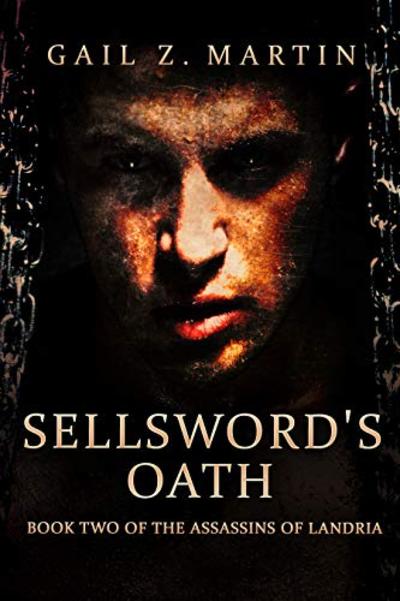 Today I’m delighted to be hosting fantasy author Gail Z. Martin. She’s touring with her latest release Sellsword’s Oath, the second book in her Assassins of Landria series. When I signed up to host her, I gave her the following questions:

How do you go about creating an entire world, like Landria? Where do the inspirations come from? How do you keep track of the historical, cultural and geographical details of a fantasy world?

World-building is one of my favorite parts of writing epic fantasy. I studied medieval history in college, and have had a life-long interest in the subject. That comes in handy when I need to create the world in which one of my series takes place.

The inspirations come from real history, and how people have organized their kingdoms and empires over the centuries. To make it feel real, I need to understand the political structure, the economics, the geography and the religion/beliefs of the world—which means taking time to sit down and think about what pieces need to be brought together to create the circumstances in which this particular story could take place. For me, that’s a lot of fun, and I get to do some deep dives into things that actually happened in our world, so I can tweak and adjust them to work in my fiction.

All the pieces need to fit together so that the reader isn’t pulled out of the story by something that doesn’t make sense. That means keeping track of the details from book to book so that I don’t contradict myself. Luckily, my husband (who is also an author and with whom I collaborate) keeps the series ‘bible’ on those important things!

My goal is to make the world feel real to the reader, like they’ve been dropped into another place and time. When the world and the setting are right, the story flows a lot faster. When I bog down on the story, it’s usually because I don’t have the details clear in my mind.

A reader may or may not notice the background details in a book (or a movie), but they contribute by making the story something that could only happen in that time and place. And for those who do enjoy being a ‘tourist’ in a fictional world, those little details mean a lot!

Buddy flick epic fantasy! The second in the Assassins of Landria series from the award-winning, bestselling author of Scourge: A Novel of Darkhurst and The Chronicles Of The Necromancer books!

Wandering mystic Yefim Makary, known to his followers as the ‘Witch Lord’, disappeared before he could be accused of inciting dissent against King Kristoph. His supporters among the disenchanted aristocrats who weren’t arrested have fled or died by their own hand. The king is happy to put the matter behind him. Yet Burke, the commander of the elite King’s Shadows, doesn’t believe the threat is over, and he assigns his two most troublesome, rule-breaking—and successful—assassins to ferret out the real threat and put a stop to Makary’s plots.

Joel “Ridge” Breckinridge and Garrett “Rett” Kennard rose through the ranks of the Landrian army together, from teenaged conscripts to seasoned fighters. Together, they became the most feared team of assassins in Landria, surviving longer that most in their profession by virtue of excellent fighting skills, legendary bravado, peerless strategy, and an uncanny synchronicity.

As the threads of a new plot come together revealing disloyalty among the priests and generals, Ridge and Rett once again find themselves on the run, hoping they and their allies can figure out the Witch Lord’s latest scheme before it costs them their lives—and the king his throne.

The trick, when setting off gunpowder, was to be far enough away.

Ridge had never been good at that part.

He’d almost reached the embankment when he heard the shot from Rett’s matchlock. Knowing what was about to happen next, Ridge dove into the ravine, taking his chances with brambles and thickets over flying rocks and shattered glass.

Behind him, the country manor exploded in a fireball as Rett’s shot touched off the barrels of gunpowder on its roof. That would bring down the ceiling and blow the bombers on the roof sky high while trapping the traitors inside, where they’d either be killed by the blast or buried in the rubble for the king’s guards to collect.

Ridge grunted as he tumbled over roots and rocks, tucking his arms over his face and trusting his leather cuirass to take the brunt of the hits. Even so, rock dust settled like snow over the whole area, and small bits of stone pelted like hail.

To keep it all official, Ridge had nailed the letter of marque to a tree in front of the manor, after he had ensured that no one but the smugglers were inside the abandoned country house. The smugglers—and their rivals on the roof—were already in the process of setting explosives when Ridge and Rett arrived to carry out the assassination. That was a bonus, killing two sets of troublemakers in one swoop and without the personal danger of getting close enough to throw a knife or slit a throat.

He trusted Rett to stay in position, where he would be able to pick off stragglers from his vantage point high in a sturdy tree. Ridge dragged himself to his feet, brushed off the worst of the dirt, and climbed back up the slope. Once he got to the top of the embankment, he would have a good view to spot anyone who might have escaped the explosion and eluded Rett’s aim.

“Damn,” he muttered when he reached the top and saw the results.

And get a free complete short story, Catspaw, here: https://claims.prolificworks.com/free/UAjd6

Gail Z. Martin will be awarding a $25 Amazon or Barnes and Noble GC to a randomly drawn winner via rafflecopter during the tour.

Welcome to Beyond Romance! I really appreciate your thoughtful answers to my questions. Hope the tour goes really well.

I appreciate getting to hear about  a book new to me. Thanks for sharing and thanks for the giveaway.

This sounds exciting and wonderful!!

Now that excerpt definitely left it hanging..thank you for writing.