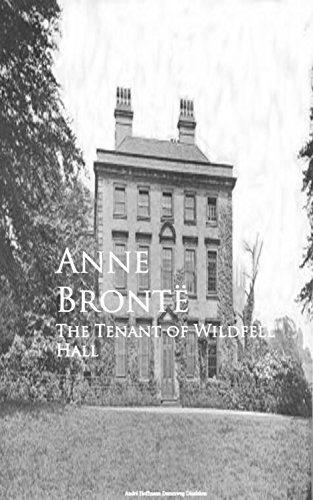 The Tenant of Wildfell Hall by Anne Brontë

When attractive widow Helen Graham and her five year old son take up residence in the run-down Elizabethan manor Wildfell Hall, the whole rural community of Linden-Car is abuzz with rumor. The stately and reserved woman barely mingles with the society around her, though she does attend church. Apparently she supports herself by working as a painter, executing and selling commissioned works.

Gilbert Markham, a gentleman farmer who is her neighbor, finds himself increasingly fascinated by the sensitive, intelligent and well-educated tenant. Despite the mystery surrounding her, he falls deeply in love, spurning the affections of the vicar’s daughter Eliza Millward whom he had previously courted. In retribution, Eliza spreads, or perhaps creates, unsavory rumors about the reticent Mrs. Graham’s relationship with her landlord, Frederick Lawrence. After observing what he believes to be an intimate tryst between them, Gilbert viciously attacks Lawrence, then angrily confronts Helen. She gives him her diary, which exposes the tragic story of her marriage to a handsome and abusive wastrel, and her secret flight to Wildfell in order to escape him.

Jane Eyre and Wuthering Heights were both favorites of mine when I was growing up, but somehow I missed this equally dramatic novel by the third Brontë sister, first published in 1848. It’s difficult in the twenty first century to appreciate how shocking nineteenth century audiences would have found Helen’s decision to flee from her drunken, dissolute, philandering spouse. Indeed, as Arthur Huntingdon’s behavior becomes more and more egregious, I wondered at Helen’s patience. Arthur is horribly devious and manipulative in his attempts to control his wife. When she finally does escape, she’s desperate and near-destitute. She knows that if she reveals any hint about her true identity, her husband will haul her back to his estate – and the rest of society will view that as his lawful prerogative.

Helen is such a thoroughly intelligent, virtuous and admirable character, one might find her annoying. She’s saved from this fate by her one fatal mistake, falling in love with Huntingdon. Given her wit and sense in responding to her many other suitors, one has to wonder why she was so blind to Huntingdon’s true nature. I suspect the author intended this novel as a cautionary tale.

Gilbert seems a good deal less perfect. Indeed, he is initially quite selfish and self-absorbed in his pursuit of Helen. His furious attack on Lawrence (who, as it turns out, is actually Helen’s brother) made me wonder if he was truly worthy of her. However, he ultimately accepts her requirement that they should not see or contact one another (as she still considers herself married), and he keeps his vow. It’s pretty clear that Helen is a good influence, helping him to curb his rather rash and passionate nature.

Arthur Huntingdon’s unhealthy habits prove to be his undoing. When he becomes seriously ill, Helen voluntarily returns to their home Grassdale in order to serve as his nurse. I will admit to rolling my eyes a bit at this extreme self-sacrifice, but perhaps this would be more plausible to a nineteenth century audience. In any case, she reaps the reward for her unselfish virtue. She inherits her husband’s estate after he dies and gains the freedom marry Gilbert, who has proved himself by keeping his promises to her.

Though some readers will likely find the style old-fashioned, I found myself greatly enjoying the meticulously crafted nineteenth century prose. Ms. Brontë employs the popular (at the time) narrative device of the epistolary novel. The first and third volumes of The Tenant of Wildfell Hall are structured as a series of letters from Gilbert to his brother-in-law. The centerpiece of the novel is a series of entries from Helen’s diary, chronicling her infatuation with Huntingdon, their difficult marriage, his increasingly destructive behavior and his attempts to corrupt their young son, which finally motivate her to hide herself away Wildfell Hall. Her rational and intelligent voice contrasts nicely with Gilbert’s moodiness.

The Tenant of Wildfell Hall is intended to convey a moral message. The author makes this very clear in her introduction. There’s a good bit of talk about God, salavation and the afterlife. Normally, I’d cringe at this sort of explicitly didactic fiction, but the novel is so vibrant and well-written that I didn’t mind at all. The book may be intended as a lesson, but it succeeds equally well as a story.

(You can download this book for free from Project Gutenberg.)