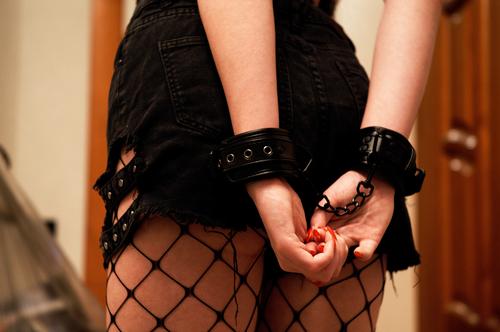 Photo by Artem Labunsky from Unsplash

A while ago, a writing colleague posted a biting critique of political correctness in publishing, especially in erotica. He cited a personal experience where an editor had labeled his climactic scene involving two people who had a sexual history as a rape because the woman had not explicitly given her consent to the encounter.

One reason this fantasy is such a powerful aphrodisiac is that it relieves the woman of responsibility for sexual activity. If you’re coerced into having sex, nobody can label you as a slut. You can remain a good girl even as you’re enjoying the enormous cock (or cocks) pounding your holes.

Intellectually, I can understand the appeal of non-con fantasies, but this particular kink doesn’t really push my personal buttons. I can recall only one book I’ve written that had elements of dubious consent (Rajasthani Moon). The novel begins with the heroine being kidnapped, whipped and fucked by a sexy bandit. The whole scenario is intentionally very exaggerated, treated in a light-hearted manner. No one could possibly doubt that Cecily Harrowsmith, secret agent extraordinaire on a mission from Queen Victoria, is having an excellent time. In general, serious non-con does not float my boat.

On the contrary, you might say I have a consent fetish. There are few things I find as arousing as explicitly agreeing to do something naughty. Even in a vanilla relationship, saying “yes” to passion is exciting and empowering. There’s always an element of risk in sex, emotional if not physical. When you overcome the fear and claim the pleasure, you reap incredible rewards.

Consent is even more potent in the context of dominance and submission. Nothing turns me on like a submissive agreeing to be tormented and used by a dominant. Admitting your deviant desires—taking responsibility for your own fantasies, twisted and taboo though they might be—scenes featuring this sort of dynamic never fail to get me wet.

My very first published work included this sort of interaction:

He leaned closer. “I want to tie you here, hand and foot, so that you will be more completely at my disposal. I believe that you want that, too. But you must tell me so. I will not do this without your permission.”

Kate was silent. She had never been so unsure in her life. Fear, suspicion, shame, and distrust warred with curiosity and desire. In his arms she had felt both sheltered and helpless, and she longed for those feelings again. Yet he was essentially a stranger, she reminded herself—a stranger with a shady profession and an unsavory reputation.

When she looked at him, though, she saw attentive concern in his eyes, belying the fierce reality of the cock which pulsed hugely from his fly. The sight of his manhood sent a delicious weakness through her limbs. I must be crazy, she thought, as she nodded her assent.

“Do it,” she murmured, and did not trust herself to say anymore.

With expert skill, he bound her wrists with the silken braids. “Silk is a marvelous substance,” he commented. “So soft, but incredibly strong. Like you, my little Kate. I know that you can endure much. Much more than you would believe.”

~ from Raw Silk by Lisabet Sarai

"Look at me." His tone was softer but no less firm. I raised my eyes to his, which were the startling blue of glacial ice. I shivered and burned. "You're new, aren't you?"

"Yes, Sir," he corrected me. My nipples tightened inside my bra.

"Yes, Sir." Just his voice was enough to make me ache.

"No, Sir. I just started at Lindenwood this week. Before that I was in the rehab department at Miriam Hospital."

"My slaves call me Master Jonathan."

My earlobes, my nipples, my fingertips, all seemed to catch fire. I wanted to sink through the floor. I didn't want him to see how his words excited me.

But he did see. I stared at my hands, knuckles white from gripping the rail.

"You have a boyfriend, don't you?"

"Yes, Sir, I do." An image of Ryan rose in my mind, his brown curls and uneven grin, muscled chest and hard thighs. I did love him, truly I did, with his quirky humor, his gentle fingers and his boyish ardor. He was a fine young man. My mother approved of him.

"He doesn't satisfy you." It was a statement, not a question. Tears of remembered frustration pricked the corners of my eyes. "Why not, Cassie? Is his cock too small?"

I couldn't believe I was having this conversation with a stranger, a patient, a half-paralyzed man forty years older than I was. I stole a glance at Dr. Carver. His mouth was firm but his eyes sparkled with suppressed mirth.

"No, Sir. His cock is fine." Ryan was justifiably proud of his meaty hard-ons.

"What is it then? Is he a selfish lover? Does he come too quickly for you?"

My mouth filled with cotton. I couldn't speak. I was acutely aware of my rigid nipples pressing against the starched fabric of my uniform. My clit pulsed like a sore tooth inside my sodden panties.

I dared a glance at his face. His left eyelid drooped slightly. His eyes snared mine. I couldn't look away. One eyebrow arched in an unspoken question.

"I—um—I want him to, uh, to do things to me. That he doesn't want to do.” I tried to break away from his gaze, but the force of his will held me.

“Things?” He sounded amused. A fresh wave of hot, wet shame swamped my body. “What sort of things?”

“Uh—tie me up. Spank me. Use me. Treat me like his slave.” It all came out in a rush, the desires I'd never shared with anyone except Ryan. Even then, I'd only shown him the tip of the iceberg, the least perverted of my needs. “He wouldn't, though. He was shocked when I told him. Disgusted. Said that I had a filthy mind.” The tears that had gathered earlier spilled out over my cheeks.

“I imagine that you do, little one, delightfully filthy.” His voice was a caress, soothing and seductive. “I knew that right away, just from your reactions to my voice. Your deepest desire is to submit to a strong master, isn't it?”

“Yes—Sir.” I felt relief, now that I'd admitted my secret. He at least didn't seem to condemn me.

“You want to be beaten and buggered, shackled to the bed and split open by a huge cock. You want to bath in your master's come, maybe even his piss. To be forced to service his friends.”

It was thrilling and horrible, listening to him enumerating my darkest fantasies out loud. My clit felt the size of a ripe plum, swollen and juicy, ready to burst. I nodded, still finding it difficult to expose myself so completely.

“I will do those things for you, if you'd like.”

Certainly I wanted to please him. Knowing he truly appreciated my surrender made it all the sweeter. But the intensity of my arousal derived more from other aspects of our interaction. His vision, seeing through my good-girl persona to the twisted creature underneath, a woman I hardly knew existed. His whole-hearted acceptance of my deviance. My secret, shameful, delicious knowledge that I was complicit in my own debasement.

We shared the communion of outlaws, two souls with perfectly complementary fantasies. I’d stepped over that line deliberately, trusting him and myself.

He and I are still in touch, though separated by many thousands of miles. He recently sent me a video of “Wolf Like Me”, by the group TV on the Radio. I’d never encountered this song before, but now I can’t get it out of my mind.

Charge me your day rate
I'll turn you out in kind
When the moon is round and full
Gonna teach you tricks that'll blow your mongrel mind
Baby doll, I recognize
You're a hideous thing inside
If ever there were a lucky kind, it's
You, you, you, you

I concur with his suggestion that the lyrics hold many D/s echoes. We both understood it in the same way—as an invitation to venture beyond the bounds of convention and normalcy, into the fierce, hot, wild unknown of power exchange.

An invitation to consent.

Still not my cuppa. But you explain it so eloquently, that I can't help but agree with you, that it sounds exciting. I respect you, and totally enjoy your writing. And Rajasthani Moon was so hot it burned the pixels in my reader!