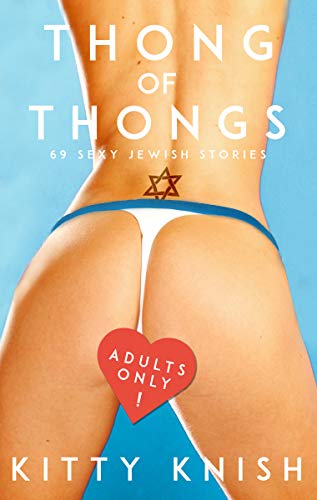 I’m Jewish, I write erotica, and I have a fatal attraction to puns. How could I resist a volume with this title and this author? Furthermore, like most temptations, I’m glad I succumbed to this one. Thong of Thongs might not be great literature, but it’s clever, literate, often funny, and occasionally, somewhat to my surprise given the book’s blurb, emotionally moving.

But let me share the blurb, just so you know what you’re getting into:

Adam, Eve and the trouser snake; streaking at a kibbutz; Freud’s introduction to submission; these are only a few of the hilariously scandalous tales found inside. Laugh your tuckus off as the Chosen People enjoy their bondage with a side of bagels and lox.

*WARNING*: While there is something in this collection for everyone, not every story is for everyone, so please approach this book with an open mind before you unzip your pants. No kvetching here, you’ve been warned!


Actually, the blurb made me worry almost as much as it made me laugh. What if the stories were in terrible taste? Would they inspire accusations of anti-semitism? Of course, taste depends on the reader. I wasn’t bothered, but I’m probably more broad-minded than most, so if you’re easily offended by the intentional use of racial and religious stereotypes for the sake of humor, give this book a wide berth.

Speaking of taste: this is a collection of flash fiction – very short stories, rarely more than a page – and flash fiction is definitely not to everyone’s taste. In fact, given her obvious authorial skill, I’d like to see what Ms. Knish could do with a longer work. At the same time, it takes a special talent compress characters, setting, plot, conflict and resolution into a mere 500-800 words. Kitty Knish does this very well.

As promised by the blurb, the stories cover a wide range of topics, with diverse styles. I’m not sure it’s quite right to call the stories “Jewish”. Many are based on Old Testament tales, with an erotic or kinky twist: Adam and Eve, Daniel in the lion’s den, David and Goliath, the Ten Commandments, Sodom and Gomorrah and so on. Others are riffs on quotations from well-known Jewish individuals, many of them authors: Allen Ginsburg, Arthur Miller, Joseph Heller, Karl Marx, Harry Houdini, and of course Sigmund Freud. I’m sure I missed at least some of the allusions; this is not a book for the poorly educated!

One problem with a book that has a large number of very short pieces is that it’s difficult to hang on to the ones you enjoyed most. Looking back over the table of contents (which is worth a chuckle on its own), I have some trouble figuring out which ones made an impression. I do remember “Let Me Set the Obscene”, a tour-de-force written in Allen Ginsburg’s style, lamenting the death of obscenity. “Smoke ‘Em If You’ve Got ‘Em” is the Freud piece, inspired by the famous “just a cigar” quote. That one starts off this way:

Let me tell you about this one client of mine. He’s a Cognitive Behavioral Therapist into cock and ball torture. A CBT into CBT; you can’t make this stuff up. We have a routine where I meet him at his office to find him lying on the leather chaise longue in the buff with his hands folded neatly over his potbelly. He’s an old German man with a white beard and glasses. He keeps the glasses on because he wants to see everything I do to him.

Two stories I particularly enjoyed were “Jojo and the Amazing Technicolor Strap-On” and “The Hebrew Girl”.

God speaks to people through dreams, and in Jojo’s case it was a wet dream.

The latter is a brief but powerful evocation of the pain of gender dysphoria.

The emotional punch packed by these two pieces makes me fairly confident that Kitty Knish is more than just a clever yenta milking us for cheap laughs. Who knows what she could do if she decided to write a novel?

I’d love to find out.

Pretty damm SARAI of you
to diss upon God.

Who is dissing God? Not me, and not this author either!