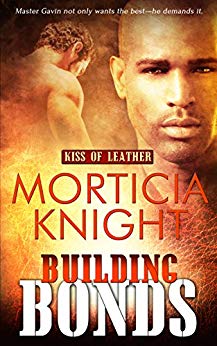 Gavin’s initial interest in Kyle is strictly professional; the club wants to engage Kyle as their exclusive carpenter, to design and construct all their equipment. However, he soon realizes he wants more, that he wants to dominate the handsome but awkward carpenter. When Kyle mentions Roger, Gavin assumes that the ex was a former Master. Only when Gavin offers Kyle a trial six-month contract as his submissive does Kyle confess to his near-total ignorance of kink.

Kyle wants Gavin so badly he agrees to become his “boy”, even though he has little understanding of what that entails. Gavin is happy to teach him. Gently but firmly, he introduces the younger man to the physical and emotional joys of submission. By the time the contract is half over, both men realize their feelings go way beyond sexual attraction.

I’ve known Morticia Knight as a fellow author and blog contributor for years, but for some reason this is the first book of hers I’ve read. I found it satisfying from an emotional perspective, less so from a logical or literary one.

Building Bonds is pure romance, pure fantasy – the soulmate trope becoming all the more compelling when it involves D/s, which demands the ultimate in devotion and trust. When I turn the light of reason on the plot, however, I find it somewhat implausible. Everything happens too fast. I don’t think a real Dom would push a total novice the way Gavin pushes Kyle (though everything is thoroughly based on consent). Furthermore, given how emotionally damaged Kyle seems to be, I wonder if it’s realistic that he’d be able to open up to Gavin the way he does.

The book also felt too short to me. Gavin and Kyle meet, get together, and fall in love. Nothing much else really happens. I expected some external conflict, perhaps from Roger’s reappearance, but that didn’t happen. I also wondered whether Kyle might not freak out from the emotional demands of his interactions with the Dom and need some space. Instead, they have a very hot scene involving a violet wand, end up confessing their love to one another, and that’s it – the end.