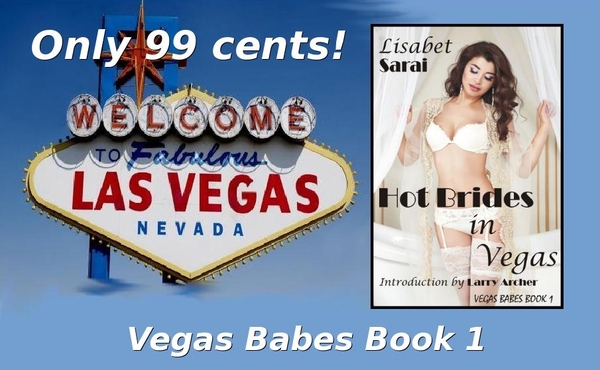 The latest book in my Vegas Babes series, Babes in Bondage, will be released on Friday.

In fact, you can buy it today, on pre-release, at Amazon and Smashwords.

To celebrate (and to give those of you who are new to the series a chance to get to know my characters and their world), I’ve dropped the price of the first book to only 99 cents - but only for the next week!

Get your copy of Hot Brides in Vegas while it’s under a buck!

Not sure if you’re interested? Here’s the blurb and a sexy excerpt.

The gleeful permissiveness of the Den challenges the women’s assumptions and undermines their inhibitions. Complications ensue when Jake and his groomsmen arrive to find Fran in the midst of her strip act. Then Aunt Giulia crashes the party, determined to save her virgin niece, and things get really sticky—both figuratively and literally.

Will love triumph? Will Francesca be drawn over to the dark side? Is there a difference?

Only 99 cents until November 7th!

Larry beamed at the customers, waiting for the hubbub to die down. “And now,” he said, “I’d like to introduce our first contestant. Put your hands together and give a big Vegas welcome to the lovely Laura!”

The first bars of her chosen music filtered through the din. “Wicked Game” by Chris Isaak, a song that always made her feel sexy. Laura stepped out of the shadows, into the pool of light on the stage.
The applause hit her like a physical blow. She would have stumbled on her sky-high heels, but the music held her.

The world was on fire, and no one could save me but you…

Like fire, lust raced through her. She raised her arms above her head in a luxurious stretch, then pivoted so her back was to the crowd. Ever so slowly, she bent at the waist, walking her hands down her legs to her ankles.

It’s strange what desire will make foolish people do…

She felt her clinging, skimpy dress ride up the back of her thighs before completely baring her ass. Her thong tightened between her cheeks, adding delicious pressure against both her rear hole and her pussy. Laura swung her hips in a figure eight, in perfect time with the music. The audience was silent—hypnotized by her slow, sensual moves—but she felt their eyes on her.

What a wicked game you play, to make me feel this way…

She twirled on her high heels, until she once more faced the crowd. At the same time, she grabbed the hem of her costume and eased the garment up to her waist, showing off her flat stomach, her shadowy navel and the lace-sheathed plumpness of her pussy. A guy sitting at the bar leaned toward her, holding out a ten dollar bill. With a smile she hoped was enticing, she crouched down in front of him, holding his gaze. He stuck the cash into the elastic waistband of her thong. In a flash of wickedness, she pushed the bill under the triangle of fabric that barely covered her sex, then palmed her pussy and rubbed hard.

The spectators burst into wild applause. Meanwhile, Laura went rigid as a mini-climax raced through her. The spotlights dimmed and the room whirled as she struggled to remain standing.

Did the people watching know? Of course they did. But maybe it was common for dancers at The Fox’s Den to come on stage. She wouldn’t be surprised.

Sittin' here, eatin' my heart out waitin'
Waitin' for some lover to call…

Laura strutted around the stage, shimmying her shoulders so that her breasts swung back and forth. People were clapping in time with the music as she bent once more and shook her ass in their faces. She felt high from the lust that washed over her. They wanted her, every single one of them.

“Take it all off,” yelled someone in the back.

She obliged, teasing the thong down over her hips little by little, until everyone could see her shaved pussy. The drenched Alexander Hamilton fluttered to the floor. Oh God!

A voluptuous brunette at the bar pumped her fingers in and out of her month, then made a come-hither gesture. Laura sank to the stage directly in front of the woman, knees spread wide, swollen cunt lips gaping. Her eyes locked to Laura’s, the dark-haired lady slid her fingers bit by bit into Laura’s weeping slit. Drawing them out, equally slowly, she dragged them over Laura’s clit.

Fireworks shot through Laura’s body. Juices gushed from her, puddling on the stage. It was lucky she was already kneeling; in this onslaught of sensation, her legs would not have held her.

“Hot stuff!” came a call from the audience, audible even above the thunderous applause. She recognized the deep voice. Steve!

Mingled shame and lust triggered another climax. Still shaking, she rolled onto her hip and somehow made it to a standing position. The music had ended, or at least she thought it had. The clapping made it hard to tell.

She made an awkward curtsy, then bent to retrieve her tangled dress, acutely aware she was showing off her ass once more.

Every story in the series is outstanding! Congratulations on the latest release of the series!

Have you started on the next one in the series?

Hi Larry - it's all your fault! I keep thinking each book will be the last.

But I'm tempted to write one with Althea, the blue-haired lady, as the main character. I got the idea for her from something you wrote on one of your blogs.