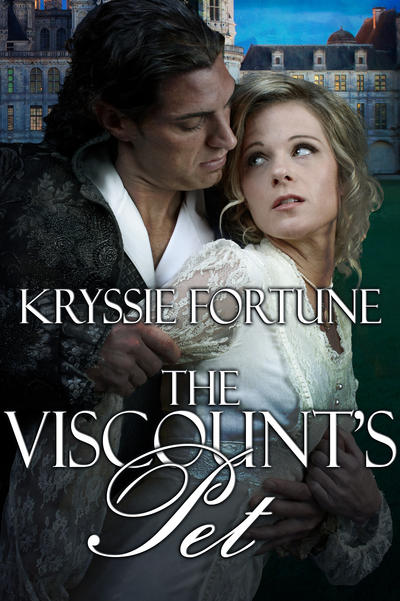 Blurb
When her brother tries to force her into a marriage with a detestable baron, Julianna Halstead flees the family estate she has helped manage since the death of her parents. But as she makes her escape late at night, Juliana’s carelessness nearly results in her being trampled by a galloping horse, and the steed’s handsome rider takes it upon himself to correct her right then and there.

Though having her bottom bared and soundly spanked on the side of the road leaves Juliana blushing crimson, the punishment arouses her intensely and her body’s helpless response cannot be hidden. To make matters worse, the gentleman over whose lap she was so firmly chastised turns out to be none other than Viscount Stonehurst, someone she has known since childhood.

When Stonehurst learns of Juliana’s predicament, he decides to make her his bride. She will be no ordinary wife, however. She will be something much more shameful. But even as she is leashed, collared, and put on display in a cage wearing only a tail, then brought out to be used in ways no proper lady should enjoy, will Juliana come to love her new life as the viscount’s pet?

Publisher’s Note: The Viscount’s Pet is a stand-alone novel which shares the Regency-era setting of Wickedly Used and His Innocent Bride. It includes spankings and sexual scenes. If such material offends you, please don’t buy this book.

OR READ FOR FREE ON KINDLE UNLIMITED

Excerpt
The horse and rider appeared from nowhere.

Julianna sidestepped and dropped her bag. Her ankle twisted beneath her, and she tumbled to the ground. When the horseman tugged hard at the reins, the coal-black stallion reared, its forelegs pawed the air. She screamed and closed her eyes. Curled into a ball, she waited for its ebony hooves to pulverize her.

The rider swore, the horse whickering as it planted its feet in the dirt by her face. Tiny dust clouds rose from the road. She coughed and crablike, she scuttled to the fallen oak at the edge of the copse. The bracken smelled earthy, and the thick foliage cushioned her bruised ribs.

Her heart beat overtime when the horseman dismounted and stalked toward her. Wearing a black greatcoat and muffler, he towered over her. Grabbing her wrist, he hauled her upright.

Even in the evening twilight, his hair shone the same blue-black as a raven’s wing. His features were familiar, but she had no idea why. One glance at his steeply angled eyebrows and she wondered if he was the devil come to claim her.

Her brother would have grabbed her shoulders and shaken her until her head ached. That or hurled vile insults at her. Instead, the dark horseman’s eyes twinkled with good humor. She couldn’t decide if they were midnight blue or ebony black. Their mysterious depths and sloping eyebrows gave him a demonic air.

His high cheekbones were so sharp Michelangelo could have chiseled them from marble. There was a cleft in his square chin that she wanted to stroke. His broad, kissable lips made her want to lick and taste, but they were set in a stern, disapproving frown. If he smiled, his dark charisma would mesmerize any nocturnal creatures. Bats, foxes, and badgers would flock to his side.

His utter masculinity sent shudders along her spine. Devilish and terrifying, he emanated menace and danger. She should be shaking in fear, but he sparked wicked longings in her soul.

Untouched and innocent, she hated how her nipples pearled and damp heat creamed between her legs. She needed his lips pressed against hers and his hands on her body. For a woman who’d sworn never to marry, that scared her more than his fury. If not for his tight grip on her shoulders, she’d have run off into the night.

Her pulse still raced, but she buried her fear beneath a haughty manner. “Unhand me, sir. I’m late as it is.”

Rather than let go of her arm, he tugged her closer. He smelled of citrus fruits and freshly gathered mint. When her gaze meshed with his, lightning bolts sizzled between them. Head bent, he moved toward her. She puckered her lips in anticipation.

Blinking, he straightened abruptly. “I could have killed you, you little fool.”

Disappointment crushed her soul. Her ribs ached from Kit’s assault and her ankle throbbed from her fall. Sniffing back tears, she thought of her mother’s pampered cat and tried to out-stare him. “My apologies, sir. I should have been paying attention, not daydreaming along in the twilight. Since neither of us is hurt, we can go on our own ways.”

“Not until you’ve learned your lesson,” he snapped.

Pulling free from his hold, she rubbed her wrist. Nervous, she retreated toward her portmanteau, ready to grab it and run. Shooting forward, he hoisted her over his shoulder. The undignified position made her ribs throb. His hand splayed over her rear end, caressing and stroking it as he pinned her in place.

Five steps and he’d carried her back to the tree trunk. Once settled on it, he thrust her over his knee. “Naughty little girls who risk their lives deserve a spanking. And I’m just the man to give it to you.” 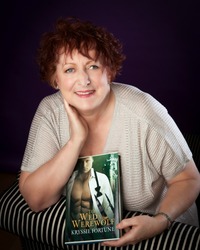 Kryssie grew up climbing trees and playing with imaginary dragons. She still loves dragons, and if she can sneak one into her books she will.

Her pet hates are unhappy endings and books that end on a cliffhanger.

Congratulations on the new release. I love the cover... she looks both fascinated and really alarmed!