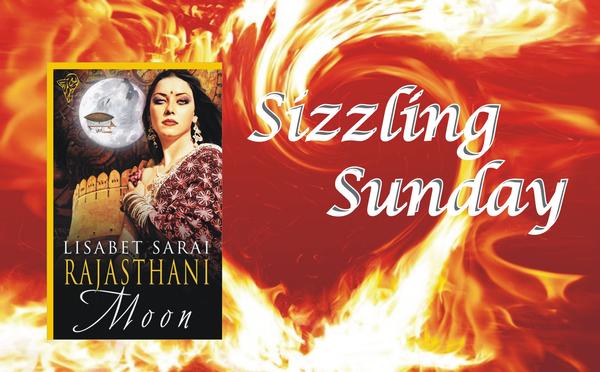 Writing about Rajasthani Moon yesterday, I realized I hadn’t done a Sizzling Sunday post from that novel in a long time. So I thought I’d remedy that!

Cecily swished her hand through the rose-scented water in the fingerbowl, then scrambled to a standing position. “If you’ll excuse me, Your Highness, I would like to retire. I am quite exhausted by the day’s events.”

“Oh no, Miss Harrowsmith. Your presence is most definitely necessary for the evening’s entertainment. Pratan, if you’d do the honours…”

The prince sprang up, seizing her by the wrist before she could flinch away. “Come along, Cecily.” His strong fingers were as tenacious as one of his voice-activated shackles. “I haven’t had the pleasure of reddening your delightful bum in more than twenty-four hours…”

“No! Not again!” Her instincts taking over, Cecily spun on the ball of her right foot, aiming a kick at his groin with her left. Pratan appeared to anticipate her move. Without releasing his hold on her wrist, he snatched her flying ankle out of the air, jerked it towards the ceiling, and toppled her back onto the cushions.

“Don’t misbehave. You’ll only make things harder on yourself.” Fuming, Cecily couldn’t help notice that her discomfiture had finally brought a smile to the man’s previously sombre features. She also realised, with some annoyance, that his brilliant parry had engendered a distinct dampness between her thighs.

“I won’t go willingly,” she insisted, trying to salvage her pride. “And don’t forget I’m a diplomatic envoy. It’s a serious breach of international protocol for you to use force.”

“International protocol be damned.” Without further argument, Pratan grabbed her around the waist, heaved her substantial bulk over his shoulder and headed for the interior of the palace, following the Rajah and Sarita.

His arm clamped across the back of her legs, holding her fast. Her head hung down, almost level with his waist, so that her long hair dangled in her face. The awkward position pressed her pubis against his shoulder and, with every step he took, his muscles rippled under the sensitive pad of flesh, teasing and delicious. Arse in the air, she beat her fists against his powerful back in a futile effort to stop his progress.

Her captor responded by sliding a hand under her skirt and pinching her butt cheek. Unerringly, he found one of her welts from the previous night.

He ignored her protests. Instead he probed her rear crevice, seeking her still-stretched pucker. “You don’t have to pretend with me, lady.” He squirmed a finger inside and for an instant she thought she might embarrass herself completely by coming in response to that rude intrusion. Another finger settled into her soaked cleft. “You’re wetter than a monsoon rain.” He flicked her clit, wringing a groan from her throat, before disappearing. “You love it rough.”

She ceased her struggling, realising she should conserve her energy for more crucial efforts. Pratan hauled her along lavishly decorated corridors that bustled with palace functionaries, who fell back and bowed as the ruler and his brother paraded past with their burdens of female flesh. Then he carried her down two flights of stairs, handling her ten and a half stone with impressive ease. They paused, and she heard the metallic click of lock tumblers falling into place. Pratan stepped through an arched doorway and pulled the wood and iron door shut behind them. With her hair veiling her eyes, Cecily couldn’t see their surroundings very well, but the dimly lit hallway along which they now progressed appeared to have been hewn from solid rock.

“My brother’s very private playground. It’s quite a privilege to be issued an invitation. You should feel honoured.”

Get your copy today, at Amazon or Totally Bound.