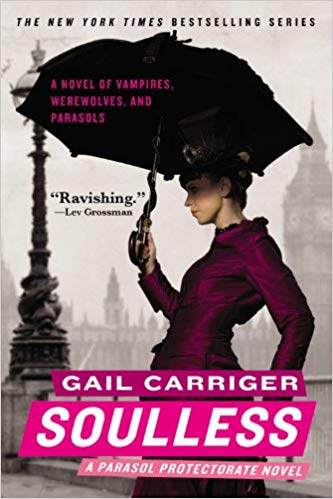 When respectable spinster Alexia Tarabotti retires to the library for tea and treacle tart at poorly-provisioned society ball, the last thing she expects to encounter is a vampire, especially a vampire who’s not aware of her unique nature. Miss Tarabotti is a preternatural, a human without a soul whose touch neutralizes the power of vampires, werewolves, ghosts and other excessively soulful creatures. Well-educated supernaturals would normally avoid her, but the library vampire, peculiarly clueless, attacks her instead. She inadvertently kills the creature in self-defense, leading to raft of complications.

Foremost among these is the bossy, overbearing and distractingly gorgeous werewolf Lord Maccon, head of the supernatural investigation bureau. With her half-Italian heritage, dark complexion, advanced age, and lack of soul, Alexia can’t expect to attract the Scottish Alpha, but she’d deeply appreciate being taken seriously. Instead he rejects all her offers to assist in probing the strange appearances and disappearances of supernaturals that are plaguing London. Of course, Miss Tarabotti is not the sort to be put off by his refusal, so she begins some discreet inquiries on her own. They lead her to a secret cabal of scientists with a dastardly plot to destroy the supernaturals upon whom the greatness of the British Empire depends – and into grave danger not only to her own person, but to those she loves.

Soulless is the rollicking first volume of Gail Carriger’s Parasol Protectorate series. Set in an alternative Victorian period in which vampires and werewolves have been integrated into British society, the book seamlessly melds steam punk, fantasy, humor and romance. Miss Tarabotti is a larger than life character with a prodigious intellect, a sharp tongue and a healthy appetite for both food and the pleasures of the flesh. Needless to say, she’s a fine match for the gruff werewolf Lord Macon, and the distinctly carnal nature of their developing relationship adds spice to the plot.

I don’t want to spoil your experience by telling you more. Quite simply, I loved Soulless. I’ve pretty much resigned myself to the fact that I’m going to break down and buy the next volume soon.

Awesome! I've had this on my bookshelf for oh, eons, but your review is bumping it up my TBR list!

I absolutely loved this book - and the rest of the series...