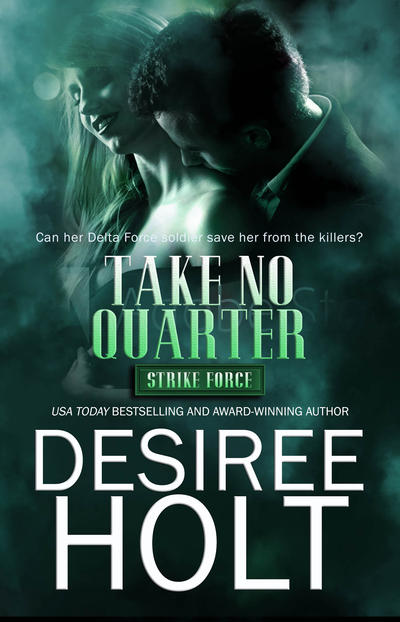 [My long-time friend Desiree Holt has a hot new release! Read on for details. ~ Lisabet]

Can her Delta Force soldier save her from the killers?

Trey McIntyre gives his life to Delta Force, gladly, as spotter for sniper Beau Williams. He believes in protecting his country in all situations. But he longs for a woman who will fit into his life like his three teammates have. But he’s learned they aren’t so easy to find.

Kenzi Bryant is a hotshot corporate attorney who can’t seem to find a man who is not threatened by her powerful personality and situation. Until she meets Trey and something between them just clicks.

But for two strong people, the road to a happy ending often has a lot of bumps. And while they are navigating theirs, Kenzi is suddenly endangered by a former client. As much as Trey wants to be with her, he has to leave on a mission again. When she is badly injured by an attempt on her life,Trey has to learn how to balance his priorities and Kenzi has to learn there are times she has to give up control.

But can they do it?

Sliding his hands down from her face he grabbed the hem of her embroidered T-shirt and yanked it up. His palms molded to her breasts as if they’d been made just for them, the warm mounds fitting just right. Even through the silk of her bra he could feel the rigid points if her nipples and he squeezed them, hard, with thumb and forefinger.

Kenzi moaned into his mouth, the sound so sensual he nearly came right then and there. Nearly out of his mind with need. He unfastened her jeans and yanked them down her legs along with her silk panties. His hand shook as he unzipped his own fly and freed himself. In seconds he’d lifted one of her legs to wrap it around his waist, opening her sex to him.

He trailed his lips along the line of her jaw and down the delicate column of her neck, all the while reaching between them to touch the lips of her pussy. Slick! Wet and slick! The words pierced his brain and ramped up his hunger. Kenzi was pushing herself against him, trying to rub her clit against him wherever she could make contact.

He wasn’t going to last another two minutes. With frantic haste he dug into the pocket of his pants and found his wallet, hands shaking as he dug out a condom and ripped open the foil. Somehow, he managed the sheath himself without tearing the latex. Cupping the cheeks of her magnificent ass to hold her in place, he pressed the head of his shaft against her opening, took a deep breath and thrust inside her.

Desiree loves to hear from readers.

Signup for her newsletter
http://eepurl.com/ce7DeE