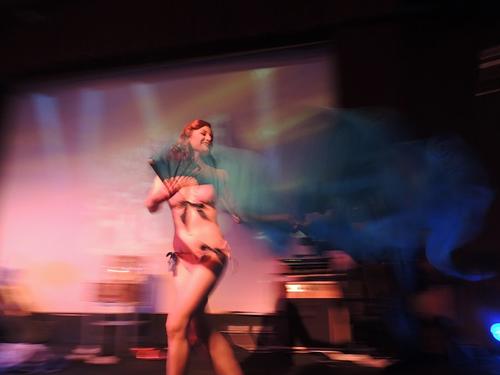 Let me entertain you.
Let me see you smile.
Let me do a few tricks,
Some old and then some new tricks;
I'm very versatile.

I grew up singing musicals. When I was still in grade school, I knew most of the lyrics from "My Fair Lady", "South Pacific", "West Side Story", and "The Sound of Music". We had all the records (LPs, of course). My mom, in particular, used to play them while she was doing housework. I've always picked up songs and verse, without really trying. So I can still sing "On the Street Where You Live", "I'm Gonna Wash That Man Right Out of My Hair" and "Tonight", as well as dozens more classics.

One of my mother's favorites was "Gypsy". I can see why, now—she was a bit like Gypsy Rose Lee's mom, flamboyant and stage struck. (It was her idea, for instance, for me and my two siblings to perform on a local TV amateur hour.) As for me, I was fascinated with the character of the famous burlesque star. I must have known even at that young age that there was something naughty about Gypsy's vocation. (I've always had instincts about that sort of thing!) Anyway, I would belt out "Let Me Entertain You" while I was doing the dishes, in between renditions of "Have an Eggroll, Mr. Goldstone" and "If Mama Was Married".

As I was thinking about a post for today, I realized that the song above could be my author-ly theme. I don't write to become famous (it'll never happen) or to contribute to the canon of great literature (despite my fantasies). For the most part, I write because I want to entertain my readers - and myself. And like Gypsy, I'm very versatile. I write in a wide range of different styles and genres, depending on my mood.

There's another song from "Gypsy", sung by several of Gypsy's fellow strippers, called "You Gotta Get a Gimmick":

I sure hope that this isn't true. I'm too busy exploring to figure out a "gimmick". My stories have some common features and themes, I guess, but they are all quite different. That's both good and bad. A reader who has experience with one of my books doesn't really know what to expect from the next. On the other hand, for a reader who likes surprises... well, I can show her a few tricks.

(Maybe I should write a story that revolves around musicals...!)

Coming up in June is the annual burlesque convention in Las Vegas and would be right up your alley.

Oh, I would LOVE that!

Me faither being from Glesga, he owned many of the Gilbert and Sullivan operettas. I longed to sing the lead, but alas, even with my falsetto, I'm not a very strong soprano. I speak in more of a low alto...almost a tenor. And the altos in the stories were always the older, unattractive women, who ended up having to be happy with the buffoon males. Bleah. Mom loved real operas, but I don't. She also loved Jeanette McDonald and Nelson Eddy, who made some movies together, their voices blending in wonderful harmony, but from what I've read, they hated each other, on and off the set.

I think I'd have made a great stripper, if I'd have needed to pay for my own college the whole way. As it is, my parents paid for most of it, and I made pizza, shelved books in the library, and altered clothing, to pay for my beer. Only in my last semester, did my dad refuse to pay any longer for my "drinkin' and whorin'". Then I took out a loan, and got the first of many tattoos. That showed him, huh? Grin.

I love Gypsy.
Thank you for the wonderful contest.

I've always fantasized about being a stripper, too. Maybe that's why so many of them show up in my books. Closest I got was belly dancing....!