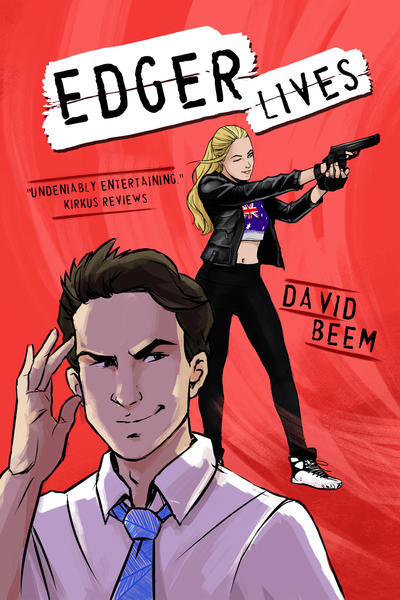 Our dork of destiny rides again!

Edger is falling for Mary, his bodyguard, kick-ass spy, and cover wife. But she’s so hopelessly out of his league, it’s clear someone’s going to get hurt. Less clear? That someone may be the Prime Minister of Australia.

When Mary confesses her desire to kill the world leader whose assassination Edger’s supposed to prevent, Edger’s superpowers pick the worst time to stop working. Without a fully functional psychic superhero, their team of spies can no longer order him to probe Mary’s mind for ill intent. The stage is set for a confrontation that threatens to strip a defenseless Edger of his loyal protector just when he needs her most.

Return to the Collective Unconscious, this time with Listerine-chugging stoners, Hollyweirdos, commie-alien-kung fu robots, one space gorilla-unicorn, and an exceedingly lovesick Vladimir Putin.

Mind your fingers and toes on page 270. Those skydiving mind-control monkeys have been known to bite!

Hang on for a wild ride!

Edger Bonkovitch is a nerdy twenty-something guy with a good intentions, a kind heart and a peculiar power. A serum developed by his super-scientist father has given him the ability to tap into the Collective Unconscious, an ethereal realm where every human soul that has ever lived continues to think, kibbitz and on occasion, offer assistance. In the past, for instance, Edger has called upon the martial arts expertise of the immortal Bruce Lee to get him out of some nasty scrapes. Wearing his Iron-Man-esque superhero suit, Edger is determined to fight for the survival of humanity against the near-omnipotent Nostradamus - though he keeps getting distracted by his bootilicious, assassin-trained, possibly-not-to-be-trusted minder Mary.

Intelligence operatives from the much-feared GSPOT and HARDON organizations want to use Edger’s capabilities for their own murky purposes. Evil clones are after him, not to mention religiously-inspired stoners, a gorgeous but vicious Russian spy, his hobbit-sized best friend and a dizzying array of other weird characters.

Unfortunately, Nostradamus (or someone else equally evil) has blocked Edger’s ability to access the Collective Unconscious. He’s on the run, bewildered, nearly helpless, when he encounters not only the centuries-old prophet himself, but his own father, previously presumed dead. As the world he knows shatters in an epic battle between good and evil, Edger wonders whether he’ll survive to appear in the sequel - not to mention whether he’ll ever have the chance to let Mary know he loves her.

Edger Lives by David Beem is a complicated, irreverent, frenetic and funny novel that requires a total suspension of rational judgment. Every scene is more over the top than the last. The book relies rather heavily on pop culture allusions, some of which I am sure that I missed. Overall, it’s quite hilarious, though the humor is so broad at times that it borders on silly.

The action scenes are particularly well-done. I could easily imagine the telekinetic battle in the hotel lobby, with the piano smashing through wall, or the even more apocalyptic struggle involving a flying fleet of tractor trailer trucks. (Read the book if you are curious...) Weird, but vivid.

If you don’t demand anything in the way of plausibility or consistency, reading Edger Lives is highly entertaining. My main criticism relates to the frequent references to events in the previous installment of this series (called Edger). Many of the characters apparently first appeared in that book, but the author doesn’t provide enough background to clarify just who they are. In the preface to Edger Lives, Mr. Beem snarkily castigates readers who didn’t happen to read the first book. I’m sorry, but I really didn’t appreciate that attitude. An author who writes a series has a responsibility to make each installment stand on its own.

All in all, though, Edger Lives is a humorous, clever diversion from the everyday. It might be worth buying the book just to enjoy Vladimir Putin in love.

I find Mary in the walk-in closet after her workout. Three of her peering back at me with wide eyes. Four, if we count the sweaty, pheromone-blasting, flesh-and-blood Mary in the middle.

Her hands glide down her hips as she turns sideways. The mirror reflections copy her like evil clones. Her head tilts, and her unreadable gaze scans from three angles every inch of her toned physique. She eyes the contours of her breasts in an understated Calvin Klein sports bra; she examines her sculpted midriff and the concavity of her bellybutton. The Gigantic Rock glinting in the mirrors, her thumbs dip below the waistline of her yoga pants, cruise outward along the elastic, and tug once. She bites the corner of her glossy pink lip and scrutinizes every possible curve from the waist down—and with legs like hers, it’s a long way down—before flitting up to find mine, spanning those sexual leagues in an instant, and landing her gaze like a side-kick to the gut. I can barely breathe.

Air squeezes into my lungs like I’m sucking it through a straw-sized snorkel. I’m slouching. Better stand up straight. Unlock my knees. I’ve got to get it together. If she and I are going to live under the same roof, I can’t be falling over every time she has the audacity to exist. Otherwise, I’ll need some kind of house scooter to motor around on my butt all day. Beep-beep, coming through, time to brush my teeth—well, well, don’t you look hot again—okay, faint on you later.

David Beem loves superhero movies, taekwondo, and flossing. He lives in Djibouti with his family and crippling self-doubt. To help actualize David’s inner confidence, visit his website and buy all the stuff: www.davidbeem.com

David Beem will be awarding a $25 Amazon or B/N GC to a randomly drawn winner via rafflecopter during the tour.

Thank you for sharing your book with us. I always look forward to finding out about another great read.

Welcome to Beyond Romance, David!

Thank you for hosting today Lisabet, and for your thoughtful review of Edger Lives!

Thanks for stopping by, James!

Congratulations on this nice review!

Thank you for the review and excerpt!

You had me at "one space gorilla-unicorn". This sounds hysterical.

Thank you for stopping by, Joye!

I hope so, Victoria! Thanks for leaving your comment today.

Ahaha, Jen! Hope you enjoy, and thank you for stopping by Lisabet's blog today!

I have to look into reading this series.