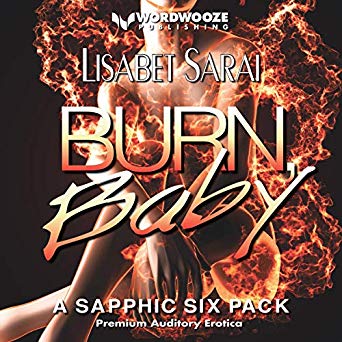 Exciting news! Burn, Baby: A Sapphic Six Pack, my collection of lesbian erotica, is now available as an audio-book from WordWooze.

Desire burns hot in these six sizzling tales by Lisabet Sarai. A high-powered executive and a Goth rocker collide on a rainy Manhattan night and succumb to the attraction of opposites. An unorthodox therapist rekindles the libido of a traumatized firefighter. A nun fights her forbidden lust for the voluptuous hooker resident at her women’s shelter. Burn, Baby includes many of Lisabet’s lesbian favorites as well as a searing, shocking new tale, “Countertransference”.

Excerpt
From “Her Own Devices”

A fingertip brushing her clit roused Chris Burton from her post-coital lethargy. She moaned in delight before bolting upright. “What in bloody hell do you think you're doing?” Her strong fingers clamped down on Lin's wrist and dragged the invading hand out of her trousers.

Lin's jade eyes were wide with shock. She didn't even attempt to free herself. “You're—you're a woman!”

“So?” A ghost of Burton's trademark grin illuminated her face. “I still made you come, did I not? Twice, if I am not mistaken.”

“But your cock—it felt so real. It reacted to my motions just like a man's. I felt it swelling. I felt it pumping.”

“Just clever clockwork, my dear.” Burton pushed her trousers down to her ankles to display a bewildering array of tubes and wires connected to the still-engorged phallus. “A tiny steam engine fed by my body heat. Electrostatic sensors. Pneumatic systems for fluid delivery and hydraulics for motion.”

“You are a genius,” said Lin, admiration evident in her voice.

“You're right. I am.” Burton pulled off the rest of her clothing and stood naked before the still-astounded Chinese woman. Chris Burton was sturdily built, with muscular thighs, small breasts sporting nipples the size of pennies and ample hips that had been hidden by her male garb. A pale scar crossed her chest from left shoulder to her sternum, souvenir of one of her more dangerous voyages. Another marred her belly. Her pubic hair was as silver as the pelt on her head. She shrugged and smiled wryly. “But what good does it do me when I can't be myself?”

“I've been masquerading as male most of my life. My parents succumbed to typhoid in Rajasthan when I was twelve. I knew that I'd have to become a boy to survive and to do all the things I wanted to do. I have had forty years of adventures: expeditions, inventions, seductions. Lately, though, wearing the mask has become a bit tiresome.”

“And has no one ever discovered the truth before?” Burton could see the wheels turning in Lin's brain. She grabbed the Chinese girl's arm and twisted it to the back, pulling the scantily-clad body tight against her own.

“No one who lived.” With her other hand, Burton reached for Lin's overskirt. She fished out the knife and traced the tip along Lin's cheek. “I can't trust anyone to keep my secret. So there have been a few who have carried it to the grave.”

Audio Book – Audible (get it free with sign-up!): https://www.audible.com/pd/Burn-Baby-A-Sapphic-Six-Pack-Audiobook/B07QYX8LGT