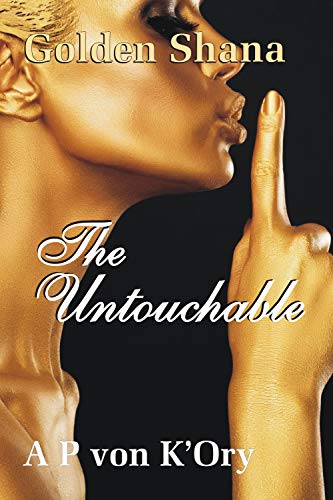 Golden Shana: The Untouchable by A P von K’Ory

Millionaire businessman Roman Castell is accustomed to getting what he wants, especially when it comes to women. Females war with one another for his attention. Roman sincerely enjoys the charms of the few lucky ones he chooses — until he gets bored and moves on. He’s a law unto himself, unattached, dominant, demanding, the ultimate male predator, a generous but fundamentally cold-hearted lover who covers all his bases by forcing his playmates to sign legal contracts before he’ll bed them.

When he encounters Svadishana Lindqvist, he is totally unprepared for the havoc she wreaks on his emotions, his life and his self-image. Exquisitely beautiful, intelligent and talented, even richer and more powerful than Roman himself, Shana initially appears immune to his legendary charisma. Meanwhile, his craving for her is visceral, soul-destroying, humbling to a man who scarcely knows the meaning of the word humility. Roman devotes all his considerable resources to pursuing the woman who has fascinated him. In the first book of the Golden Shana series, The Chase, he makes some slight progress in winning her. In the second book, The Capture, he succeeds in overcoming her resistance, which derives partly from a history of sexual abuse, and binding her to him with ties of lust and perhaps of love. However, he can’t resist exercising his power over the other women in his life: his former mistress Marie, who is pregnant with his child, and Shana’s childhood friend and one-time Sapphic lover Alyssa.

The Untouchable, the third volume, opens as Roman welcomes the love-sick, desperately willing Alyssa into his dungeon. Motivated by ego, jealousy and a desire for revenge, he secures Alyssa to his bondage cross then forces her to watch as he ravishes Shana. The perverse scene, though pleasurable for everyone involved, terrifies Svadishana. Roman seems to uniquely fulfill her on every level - physical, emotional and spiritual - but she fears that under his influence she’ll lose all independence and control. She also, quite logically, foresees practical problems in their relationship, given their demanding careers and potentially conflicting business interests. She asks for some time and distance to consider their future, and Roman grudgingly acquiesces. Shana jets off to the other side of the world, leaving him alone, bewildered by his feelings, needing her as he has never needed anyone. She misses him with equal fervor, but her loneliness and desire are not enough to overcome her concerns about their future.

Meanwhile, the man who raped Shana at university (Grieg, nicknamed “Phoenix”) proceeds with his plans to reclaim the woman he views as His Girl. Roman, as might be expected, fights back with every weapon in his substantial arsenal. The middle of The Untouchable reads more like a thriller than an erotic romance, as the rivals and their respective henchmen try to outsmart and destroy each other. Only near the end of the novel do Roman and Shana reconnect, in a violently passionate, multi-chapter love scene. This reconciliation makes it clear to both of them that despite the obstacles, separation is not a viable option.

Golden Shana: The Untouchable, like the two previous installments in the series, is vivid, passionate and engaging. I especially liked the middle third, in which Phoenix and Roman basically go to war against one other. Roman shows both his strengths and his weaknesses in this segment, while the reader comes to understand the fundamental evil represented by his opponent.

Ultimately, though, I ended up feeling frustrated by and annoyed at most of the characters, with the exception of Marie and the surprisingly moral thug Garlinski. Roman, it seems, has not learned or changed much during his ardent and arduous pursuit of his golden goddess. The final chapters show that he is still as selfish, immature, arrogant and egoistic as when we first met him. Shana has demanded some space and time away from her lover and nemesis, but he barges in on her nevertheless, then blames and punishes her for depriving him and making him unhappy. This behavior does not, in may opinion, reflect true love. Meanwhile, Shana succumbs to his aggressive machismo rather than holding him to account for breaking his word. The whole scene perpetuates the sexist mythos of the magic cock that can undermine any woman’s resolve and turn her into a gasping puppet desperate for penetration. I’d thought Shana was better than this; Roman too.

How can this be true love when Roman is so dishonest? He hides the fact that he is expecting a child by another woman. He shares nothing about his experiences fighting Grieg. Indeed, if he were thinking about Shana’s safety, he’d realize she needs to know that she’s being stalked, that she’s been marked as Grieg’s victim. Roman is still unaware of the true identity of Phoenix, but he has clear evidence of how dangerous he is.

It’s clear, though, that the author considers Shana’s and Roman’s intense connection to be so powerful and fundamental that it renders all these considerations moot. I believe that she personally loves Roman as much as Shana does. This conviction comes through in the love scenes, where she lingers on every gesture and reaction.

Personally, I am not convinced. Your mileage, as they say, may vary. In any case, if you enjoy passionate romance full of unexpected twists, you should check out this book.