Meghan Mallory has a plan for her life and it does not involve falling in love. She doesn’t have the time nor the inclination. She’s too busy trying to save the world. But when a freak snowstorm puts her in the path of a man she has secretly been fascinated with for years, she is forced to reconsider her stance on dating. Spencer is rude and obnoxious with his bad boy swagger but then he rescues her when she gets stranded on the side of the road, like a knight in tarnished armor, and sweeps her away to his house to ride out the blizzard.

Spencer Collins likes his life just fine, thank you very much. As the owner of the lifestyle club Cuffs & Spurs in Jackson Hole, he has a bevy of available subs who are his to command – not that any of them have held his interest in longer than he can remember. When his best friend’s sister-in-law gets herself into trouble, Spencer heads out to rescue the little brat who is in need of a firm hand. But he never expects to be forced to confront the incendiary heat that has always existed between them.

As the storm rages around them, they surrender to a passion hotter than the sun. Now that he has felt her surrender, Spencer attempts to lure Meghan into his world. But will they let go of their pasts or will they allow secrets to destroy them? 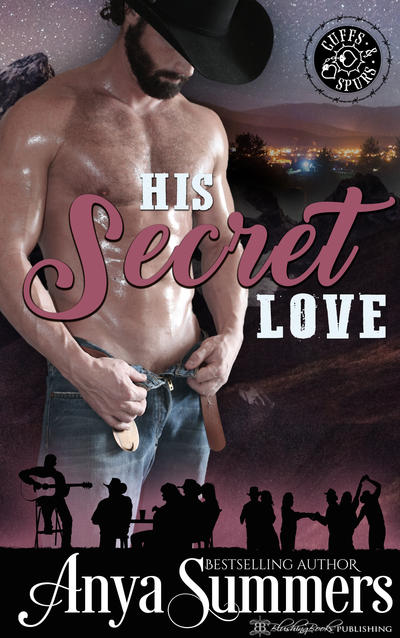 “I’m to tell you that your sister is pissed you worried her this way.”

Meghan squelched the ever-present guilt when it came to her sister and sighed. “She always worries. Why aren’t we going to Carter’s? It’s a hell of a lot closer than your place in Jackson.”

She studied his profile, the angular, firm jaw covered with a neatly trimmed black beard.

His gaze was trained on the road as he navigated. The way his big hands—the fingers long and bluntly tipped—kept a firm hold on the wheel made driving in these horrendous conditions appear effortless. “We aren’t going into town. My house is roughly ten minutes from here.” His gruff voice, the deep, rather exasperated, bass slithered along her spine like a caress.

“But I don’t want to stay with you,” she protested. She’d rather be stranded on Hoth or on the U.S.S. Enterprise without power. Plus, she’d been looking forward to a night or two at Casa Jones with lots of yummy food and the chance to hang with her nephew. She was indoctrinating him into her love of pop culture and science with measured success. Then there was also the tiny little fact that the thought of being cooped up with Spencer, alone, made her entire body simmer, and not in anger but anticipation.

“Why? Chicken?” he dared and glanced her way.

Meghan’s heart thudded. Her mouth went dry. And deep down she knew the answer was a resounding yes, not that she would ever admit it. With a deadpan glare, she snorted. “Nope. In your dreams, big guy.”

“Relax. I don’t bite. I have guest rooms you can pick from and we will hardly see each other.”

“Sure. Thanks. I just don’t want to be an inconvenience.” Not just to him but to anyone. Not ever again.

He rolled his shoulders in a manly shrug that was so distinctly bored alpha male, her entire body whimpered with the desire to feel all that strength against her.

And then he opened his mouth. “There are always ways in which you can thank me.”

The innuendo flash-fried her brain, bombarding her with carnal images she wanted to deny. But her body told a far different story. Stupid hormones. Her blood ignited. She pressed her thighs together to squelch the distinct throbbing and felt her nipples bead into hard points. Thank god the parka cloaked and hid her desire. She didn’t want to feel this way about him—or anyone, for that matter.

She cast him a withering stare. “Ew. Thanks, but no. You can let me out right here if this rescue comes with those kinds of strings.”

“Just saying, if you really feel that bad, I can find plenty of chores to keep you occupied.”

“Chores?” She glanced his way. His lips were compressed into a thin line but those midnight eyes of his, the ones she saw in her darkest fantasies, danced with merriment. He was teasing her, the big lug.

She couldn’t help it. Really, the man drove her to it. And perhaps her brain had not yet completely defrosted from her sojourn on the side of the road and then the tawdry images her brain had conjured at his innuendo… Her fist curled of its own accord. She punched him in the arm.

“You’re such a jerk. You had me thinking—”

Before she could retract her left fist, he snatched her wrist. “Careful, brat. Had you thinking what?”

And his dark gaze glittered, bored through her defenses before shifting back to the road.

What did he see? Did he intuit that she was fascinated by him? That the thought of him putting his big hands on her again liquefied her insides? Just the simple contact of his hand gripping her wrist, his thumb pressed against her wildly beating pulse, made her panties wet.

Plus, I have an Exclusive Bonus Scene from HIS SECRET LOVE available for a FREE download by subscribing to my newsletter. https://goo.gl/phM786

Visit me on social media here:

Buy Link for His Secret Love

Anya Summers will be awarding a $15 Amazon or B/N GC to a randomly drawn winner via rafflecopter during the tour.