The Best of My Love

The first few weeks of January have many of us in shock. We've lost so many great artistic talents: David Bowie, Alan Rickman and now, Glenn Frey. This last means the most to me. The Eagles were the soundtrack to my twenties. I can sing most of their lyrics. So many fantastic songs. "Desperado". "Life in the Fast Lane". "Witchy Woman". I know them all.

When I think back to my years in graduate school, which more than any other period of my life determined the person I've become, I hear "Hotel California" playing in the background. 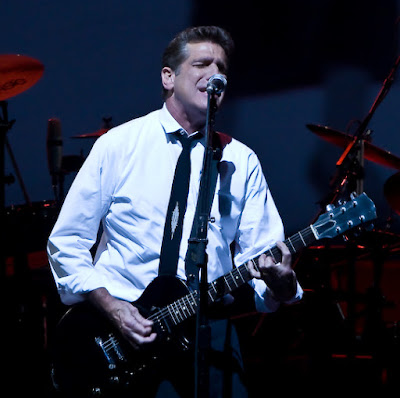 I embroidered cacti and longhorns on a denim shirt as a present for my first real boyfriend, along with the legend "Take it to the limit". It was a gift of my hands and an allusion to the music we both loved. He and I shared a five bedroom house with three other guys--a wild time. Once we threw an all-night Hotel California party. It began at nine PM with pink champagne on ice and ended at dawn, with tequila sunrises.

That was decades ago, of course. But we so often continue to think of ourselves as young, even as we age. When someone from our early years passes, though, reality hits home. Glenn was less than five years older than I am. Death is more than ready to crash my party.

I'm determined not to mourn, however, or to become morbid. I refuse to worry about the end. It will come when it comes, whether I worry or not. Instead, I celebrate the work of artists like Bowie, Rickman and Frey, grateful for what they brought into the world. They left us something of themselves that will endure long after they've gone. The best of their love.

I can only hope that at least a few people will someday think the same about my stories--a labor of love if ever there was one.

Posted by Lisabet Sarai at 7:30 AM