Greetings! Today is the start of Thanksgiving week, and hence, of the holiday season. To celebrate this season of love and generosity, some of the authors associated with the Coming Together altruistic erotica group are doing a fabulous blog hop, starting today through next Saturday. The grand prize will be a $40 bookstore gift certificate—not a bad holiday gift!—but in addition, every participating author will have a prize for a reader who comments on his or her post.

Meanwhile, I will have post every day during the hop. That’s seven chances to win, not including the grand prize!

I start off today with a kiss from my M/M holiday tale “Last Minute Gift”. This story was included in Coming Together for the Holidays. All proceeds from that book support Stand Up for Kids.

And don’t forget to visit Snog Central today for more sexy kisses. (Victoria Blisse is also a Coming Together author.)

Oh, I almost forgot the prize! Leave a comment on this post, with your email address, and you could win a copy of my holiday romance Slush. 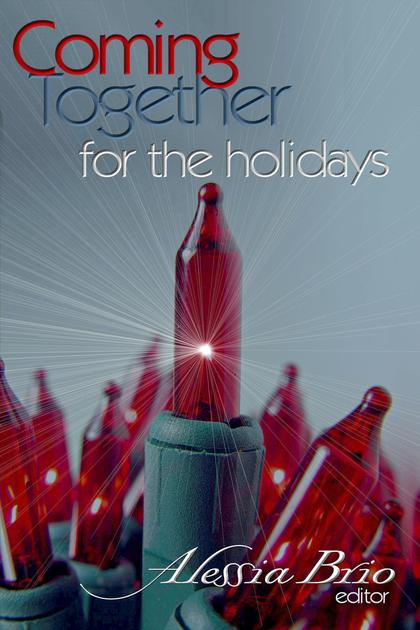 He and Flynn fit so incredibly well. He could scarcely believe the guy had been a virgin. Flynn was crazy for cock now, a real ass slut, screaming for more, more... so hot. So generous. This was something new, something different... something special.

The thought was what finally brought him to the boiling point. Roaring with lust, he ground his cock into Flynn's bowels and let loose. Jet after jet of spunk flooded out of him. Flynn's channel rippled around his spurting cock, milking him.

He collapsed onto Flynn's back, dimly aware that the other man was shaking with his own climax. Harry's going to be pissed at me for messing up his sofa, he thought. But it serves him right for making me work on Christmas Eve.

With his last bit of strength, Scott rolled off the couch onto the carpet, so that Flynn could stretch out. He lay on his back, panting, feeling what he knew was a silly grin spread across his face. “Damn, that was great. Thanks!”

Flynn's hand snaked down to give his a squeeze. “I'm the one who should thank you.” The artist propped himself up on one elbow and smiled down at Scott, his eyes glowing. “Now I know what I've been missing!”

“Yeah, well, you shouldn't have any trouble pleasing a lover after this.” Scott swung up to a sitting position and planted a kiss on the other man's laughing mouth. “Though you still might want to buy one of the plugs – just for practice.”

“I'd rather practice with a partner.”

They both giggled, then fell silent, awkward after their recent communion.

“I should close up the shop. It must be really late.”

“Same to you.” Scott peered around the office, trying to figure out what he'd done with his briefs. By the time he found them, he discovered, to his intense regret, that Flynn had already donned his trousers. Their eyes met.

“So, are you spending the holidays with your family?”

Scott snorted. “Fat chance. They pretty much disowned me when I told them I was gay. Anyway, they're out in California.” He looked down at the fingers buttoning his shirt, not wanting Flynn to see the moisture in his eyes. “I figured I'd do some studying.”

“Hmm. Do you want to come me with me to my mom's place out in Armonk?” Flynn forced Scott to look at him, then rewarded him with a deep kiss. “Nobody should be alone on Christmas.”

Flynn's lips reawakened Scott's excitement. He groped Flynn's crotch and discovered that his companion was hardening too. “I'd love to – but are your parents okay with you bringing a guy – a lover – to Christmas dinner?” Lover. The word kindled a new kind of warmth in his belly, something he hadn't felt in a very long time.

Wow, nice post! Thanks for doing this!
debby236 at gmail dot com

I have both (fab!) stories, but I'm psyched for the event!

I loved the excerpt and what an amazing giveaway.

Thanksgiving with Scott and Flynn would be explosive, nice excerpt.

Love all the cover, the artwork on them is amazing. and the excerpt/blurbs are wonderful. looking forward to reading the rest of the books. thank you for the great contest. Hope you have a Happy Thanksgiving.
tammy ramey
trvlagnt1t@yahoo.com

Scott and Flynn, yum to the max, thank you! elainegaye@gmail.com