I was always an odd child. I know a lot of people say that, and especially a lot of writers, but that doesn’t make it untrue. I never wanted to play house or tag or anything like that. I always wanted to be a witch or an alien general. Well, a rebel commander, to be more specific. Every single time.

See, I’ve never been interested in the traditional. I didn’t know what was going on back when I was younger, but now I understand that I like being subversive. There’s a lot of psychology behind it that doesn’t need to be examined right now, but in short, it was a defense mechanism. I knew I wasn’t going to fit in, so I made myself as weird as possible. To be frank, I still catch myself amping up my differences if I want to make an impression.

But the subversion? I still enjoy the subversion. I’ve always liked it when things defy expectations, and I’m hardly alone in that. That’s why fairy tale horror stories are so popular. TV shows like Once Upon a Time. Movies like Rise of the Guardians. They all take what we think we know and twist it around.

I have my theories on what it is about those retellings that appeals to people. Don’t just assume I’m right, since I can only draw from a limited pool of experience, but I tend to think it’s the same thing that makes people enjoy brain teasers and riddles. People like to figure out problems, and with something as open-ended as retellings and subversions, the problem is incredibly complex. You don’t know quite how things are going to be flipped around, just that they’re definitely going to be flipped around somehow. The human mind wants to tackle that problem and come up with a solution. The same thing as mystery novels, now that I think about it. There’s something to be solved. Here are your clues. Go.

I do it in my writing, too. Or I try to, at the very least. I’ve always enjoyed fiction that’s slightly left-of-center, shall we say. I’ve got plenty of bizarro books on my shelves, several of Christopher Moore’s retellings of classic literature and history, and a fair smattering of new weird fiction and magical realism. I like books and stories that actively defy classification.

I haven’t pulled the trigger on anything quite that daring (I like to know my genres and subgenres, so I’m still somewhat hesitant to go all out and say “Screw it!”), but I do try to work around classical interpretations of ideas. I mean, I’m already crossing genres by writing SF/F erotic romance, so it’s just a little step further to start playing with the individual elements. I’ve written stories where one of the romantic partners is entirely imagined, or exists only in virtual reality. I’m currently working on a series set in a total fantasy world, and I’m having far too much fun playing with the expectations attached to epic fantasies.

In my latest book, Silverfall, I had one major fantastical element: the unicorns. When most people think of a unicorn, they think of something mystical, often very pretty. Normally white, representing purity, lots of lore about how they can only be approached by virgins. So basically, they end up being these bastions of traditionally “good” values.

I didn’t want to mess with that at all. Far too annoying, far too overdone. So when I made the decision to do unicorns as a major part of this book, I flipped the script. I wanted these huge, battle-ready beasts. Two feet of razor sharp horn, skin as durable as armor, the size of a draft horse (Percherons, for any horse-lovers wondering which breed I chose. Percherons with some select features from Akhal-Tekes.). I wanted burly unicorns. Unicorns you really don’t want to piss off. And that’s what I got.

Of course, there’s plenty of hot man-flesh to go around, too. Some traditions are just too good to give up. 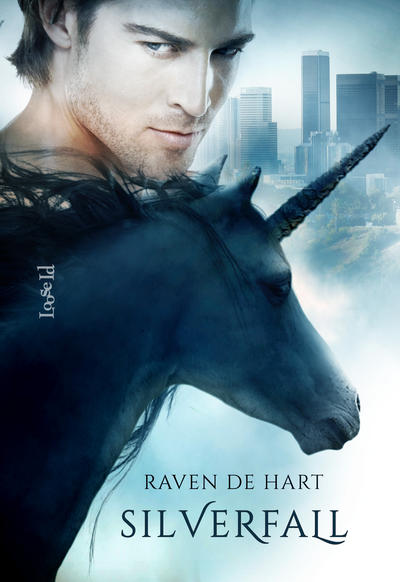 The city hides a lot of secrets. Sometimes, those secrets break free.

Unicorns can’t be real. That’s what Anthony Gates always thought. At least until he saw one murder a man. Now there’s a myth stalking him through the streets of San Francisco. And right when he’s starting in on a very passionate—and promising—relationship.

Leon Phillips is a security guard with a secret. A dangerous secret. One he can’t even share with his new flame, Anthony. But when the mysterious Lionshead organization rears up, he’s left with only two choices: come clean about who he really is, or give up on Anthony forever.

Can their romance survive onslaught from all sides, or will the secrets eat away at what could have been?

I made it through and leaned against the other bar. This bartender wasn’t quite as cute as the first one, but I hardly thought I’d be headed home with either one of them. “Double bourbon, rocks.”

I reached for my wallet to give him my card, start a second tab, but a large, gruff hand wrapped over my wrist. Its partner handed a twenty to the bartender. “I’ll cover it.”

Shit on fire. Someone was actually paying for my drink. Of course, it was probably some old fart who was hoping to get lucky with someone the same age as his fucking grandson. That would be my luck. But I had to show my appreciation. Hopefully I could end the bad situation there.

“Thanks, but you really don’t have to.”

He didn’t sound old. Fuck it. I dared eye contact, and I was fucking thrilled with the outcome. He was tall. Over six feet. Short black hair, clean-shaven, and well-built. Very well-built. He had these big, dark eyes. Almost black and almost too big for his face. His gaze bored into me. Even when I blinked, I could see them, clear as the clearest night sky. He had scars all over his face, neck, and arms. Subtle, but there. And, perhaps most importantly, he had to be somewhere close to my age. Or know a really good plastic surgeon.

“Hi.” I offered him my hand properly. He grabbed it, squeezed it as he shook. Strong.

“Anthony.” I sipped at my drink, but suddenly, I didn’t seem to need it so much. I leaned on the bar and smiled. “So, how about that small talk?”

“Hate it. But I occasionally endure the torment.”

He shrugged but didn’t break eye contact. “Mainly when my conversational partner is lovely enough to warrant the effort.”

Again, a shrug. Then a smile. It wasn’t a cute smile or a sexy smile or a pretty smile. It was too big, and his teeth were too horsey. That was all right with me. He was real and attractive, not fake and plastic like all the other guys I’d come across in California.

He took a drink of whatever was in his glass. “So the weather’s been pretty good lately.”

“Well, that’s not entirely true.” He clinked his glass against mine before continuing. “It rained that one time.”

“Must have been before I moved here.”

“Where’d you move from?”

“Not exactly. Our neighbors did the whole cattle thing. My family was always more into horses.” And just like that, the unicorn trotted back into my mind. But it also trotted right back off and let me focus on Leon. “What about you?”

“I’ve pretty much been here my whole life. Moved around to different towns, but the city life always suited me best of all.” He took another drink and finished it most of the way off. “What do you do for a living?”

That was a great question. Totally made me datable material, talking about my dead-end job. “I’m on the night crew down at Michaelson’s Grocery.”

So much for my artful dodging. “I’m a stocker. Nothing special, but it pays the bills.” Needed to get off that subject quick. “What about you?”

“Security.” He said it fast. If I wasn’t feeling the liquor so hard, I might have questioned it. And if he wasn’t so damn good-looking and interested in me. For once. “I work for whoever decides to pay me that week.”

He snorted. “Hardly. There’s not nearly as much activity as the TV writers would have you think.” He reached over and touched my cheek, rough skin scratching. “How do you feel about kissing strangers, Anthony?” When he pulled his bar stool closer, I didn’t back off. I thought I maybe should have, but I didn’t. I let him touch me. His skin was warm and hard, and he smelled like cut grass and wet dirt. I don’t know why. Maybe it was just my imagination. That was completely possible. But I still breathed deep. If my brain wanted me to think he smelled that perfect, I was going to take full advantage of the delusion.

He kept his hand there for a long time. Longer than I’d ever normally allow a stranger to touch me, sober or not. My heart thumped hard in my chest. Damn it, I felt good. I brushed my fingers through his hair. Soft to the touch.

And then it happened. I leaned forward, balancing my stool on two legs. Given how much liquor I’d had, that was an impressive fucking feat. I hesitated for half a breath just an inch away from him. Close enough to see his pores. Close enough to feel his gentle breath, hot and scented like whatever fruity cocktail he’d been drinking.

I leaned in that extra inch and pressed my lips to his. Not long. Hardly more than a peck. No tongue. But it still sparked inside me, lighting something animal to life in my core. I snuffed it out. Or tried…and failed. It remained there even as the heat of embarrassment took hold.

“Was that all right?”

“No complaints from me.” The big toothy smile again. “In fact, I think we should do it again.” He scooted even closer, weaving his legs between mine. He whispered the next part. “Go ahead.”

It took me a bit to believe it, to believe he really wanted to kiss again. But he didn’t pull back when I leaned closer. I parted my lips, conformed to the curve of his mouth. I dared a flash of tongue, just the slightest brush against his teeth. His tongue touched mine just as I went to pull back, and the sensation stuck there, lingering in my mouth.

I looked into the big, dark eyes. The skin crinkled around them as he laughed. “Well, I think that was okay, don’t you?”

After years on hiatus, Raven de Hart has once again picked up her pen to write her salacious stories and tantalizing tales. And the occasional lewd limerick, if she's had enough wine. Her short work has been published in various anthologies from Cleis Press and Bold Strokes Books, among others. She is also the author of a variety of books, including Wild Ride and Silverfall. When she is not writing, she can be found tending her herb garden, playing with her Basset Hounds, and trying to figure out this new-fangled internet fad.

View her books on Goodreads: https://www.goodreads.com/author/show/5191569.Raven_de_Hart

Thanks so much for being my guest. Silverfall sounds utterly delicious.

And I've always been a big fan of subversion!