I first met C. Garcia-Sanchez, like so many of the authors whom I admire, through the Writers list of the Erotica Readers and Writers Association. I honestly can’t remember exactly how we struck up the first of our many email conversations. I do, however, recall him asking me if I would read and critique his work in progress, “The Color of the Moon”. And I remember being stunned and amazed by the beauty, wisdom and depth of that piece—even as I was playing the role of a responsible crit partner, suggesting cuts and changes. His compelling tale of ancient Japan, with its itinerant Buddhist monk and passionate ghost, was like nothing I’d ever read. Certainly, despite its intense eroticism, it was a far cry from the salacious tales I typically critique and review.

Garce writes from his heart and his soul. His stories are often difficult. They challenge both intellectually and emotionally. I don’t want to scare readers away, but I also must warn you. You will not read this book and remain unchanged.

The proceeds from Coming Together Presents C. Garcia-Sanchez will benefit the Rape, Abuse and Incest National Network (http://www.rainn.org/). RAINN is the nation's largest anti-sexual assault organization. It operates a national hotline, educates the public about sexual assault; and leads national efforts to prevent sexual assault, improve services to victims and ensure that rapists are brought to justice. Garce picked this charity after writing one of the stories in this volume (“Miss Julia’s Cake Club”). When you read the story, you will understand why.

Garce is always self-deprecating about his own abilities. He claims that he’s just an apprentice and calls me his “mentor”. I tell him that you can learn craft but that means little without inspiration. Personally, I’m honored to be able to present this collection of stories by one of the most talented authors I’ve ever had the pleasure to read. I hope that you’ll appreciate his visions as much as I do.

[In case you haven’t figured this out, I edited this collection. Leave a comment and you could win a copy of my sci fi erotica story, The Antidote. But I hope you’ll consider picking up a copy of Garce's book, for yourself or someone you love.]

Here’s a bit from the stunning coming of age story, “El Pimientero”. 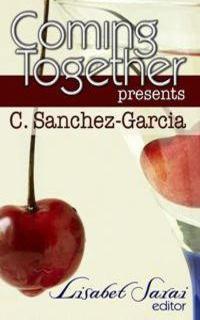 That first time going in, how does that feel for a boy? It was not like I expected. It felt keenly strange. To feel the wet flesh yield and envelope the tip of my cock, to feel it go in like a blade.

I looked up at her eyes to see if I was hurting her. She was looking away from me, at nothing, almost indifferent, it seemed, to what I was doing to her. I pushed forward firmly but gently and watched from above as my stiff cock disappeared an inch at a time. Deep and down into her slickness, her open woman’s wound. The feeling. It was as complex as wine. The animal strangeness of being inside another person for the first time. To look down between her legs and see our mounded hairs bunched up against each other tightly, and just below that the hard shaft disappearing into her. The delicious warmth wrapped all around the shaft of my cock. The tip of my cock was throbbing and tickling me madly. A couple of strokes and I would surely pop. It was important to wait. To prove to her I could do it. But I could feel the excitement building, even as I kept still, leaning into her, but not thrusting. Only holding it there and feeling the maddening sensations getting away from me.

“It’s about letting go,” she had said, one evening at the cine. The projector was threaded with an Arnold Schwarzenegger flick. We sat there in the hot little loft, side by side, drinking Squirt soda from scratched green bottles and eating cookies. “It’s hard to let go, especially for the man,” she continued. “It’s hard for the woman during sex also, but it’s hard to let go in other ways, ways that are different. The man has to calm his penis in the beginning so that he doesn’t lose control and shame himself. Or you can do it the other way too. I had a lover named Horatio. He had a runaway pinga, like a pistol – bang! He didn’t fight it. He simply shoved it in and said ‘This one is for me, Maria, the next is for you!’ and bang and bam and thank you. Not even a minute. But he got it up again quick and he was good for the rest of the night. It was like taking a rock out of his shoe. For a woman, letting go is about letting go of your heart, of letting yourself be open. It can be very difficult.”

I felt myself letting go and my breath becoming faster. I grunted and tensed against it, grinding my teeth, trying to perform the special stopping act I had practiced. But my body was beginning to win.

“Get off of me!” She twisted away, put her foot up against my belly and shoved me out of her. My cock throbbed as I doubled over, holding it in. A single pearl drop burst forth and dribbled, dangling a second like a tiny rope and then dripped away to the floor. I looked up at her. Her face was red.

“What are you doing, Chacho? Do you want to fuck your grandmother? What would your mother say if she saw what we’re doing? Who do you think are?”

She curdled into a ball, pulling up her knees. She bunched up the blankets and buried her face. I heard a wail and she curled up tighter, covering her face with her hair.

Love the cover, the artwork is amazing. and the excerpt/blurbs was wonderful. looking forward to reading the rest of the books. thank you for the great contest. Hope you have a Happy Thanksgiving.
tammy ramey
trvlagnt1t@yahoo.com

The excerpt was well crafted and leaves more questions than answers, a perfect hook.

Thank you for being a part of this lovely initiative to give thanks.

I am enjoying these blog posts. What a sad thing that we have to have an organization like RAINN!

Not even gonna lie, I really love sci fi erotica. You can do so much with it!

Thanks so much for telling us more!

True. Garce is the closest I've seen to pure genius in this genre. Makes my work feel so insignificant.

You are an endless source of encouragement to me. Working up the courage to show you my stuff was the luckiest thing I ever did.

Thank you. You are a goddess.

Wow, what an excerpt!

I loved the great excerpt. Thank you for sharing.

This really looks intriguing so thanks. flubber2kool@gmail.com