The Attraction of Submission: Saying Yes to Sir

Felicity starts out naïve and innocent in my latest novella, Something Brave. She’s a strong, independent woman working hard to make ends meet by selling her handmade jewellery. She doesn’t want help from anyone. She doesn’t take orders easily and she’s got very strong opinions. So why does she agree to submit to a total stranger?

Sir is compelling, that is very true. He owns the room in his sharp suit, has the most intriguing blue eyes and refuses to take no for an answer. Felicity is instantly attracted to him and when he asks for more than just a jewellery commission Felicity finds it difficult to resist. Even though she knows it’s completely ridiculous, that it just doesn’t make sense, she can’t help it. She wants to submit to this man. 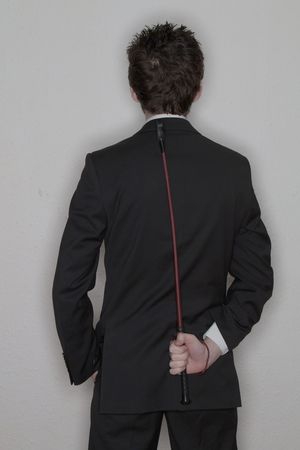 What is the attraction of submission? Is it the freedom to just experience what is given to you, to revel in pleasure without guilt? Is it the joy of pleasing another at all cost? Maybe it’s the firm knowledge of right and wrong. Sir decides the rules and all the sub needs to do is follow them. Being good leads to reward and bad leads to punishment. It is simple and it is sexy. 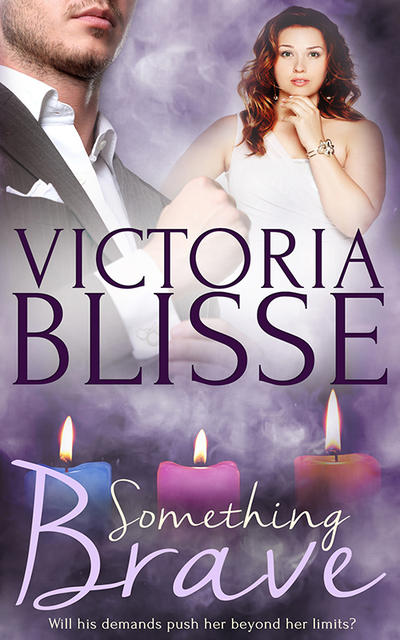 Blushing, shy Felicity does something incredibly brave and submits to a man she only knows as Sir, but will his demands push her beyond her limits?

Felicity attends the local burlesque fair just to sell her Quietly Cute jewelry. A handsome stranger offers to spank her, and she surprises herself by submitting. Sir makes her choose the implement he will use to take her spanking virginity—and uses it to great effect.

She finds herself becoming the sexy, self-made billionaire’s sub who is punished with bondage, forced into exhibitionism, hot wax and other delicious tortures. Felicity submits willingly, getting braver with every interaction. But when Samuel offers her the means to establish her business and pulls her out of the poverty she lives in, she snaps, seeing it as an insult to her pride and possibly even a payment for her sexual services.

Can Samuel convince her otherwise, or will she walk out of his life forever?

“Hello, Felicity.” He smiled that maddening smile, his eyes twinkling with mischief.

“I’ve not been able to find what I’m looking for, so I’d like to commission you to make them for me.”

“Okay, I can do that.” She dropped into practical mode, picking up her notepad and pen. “So handcuff cufflinks, metallic, by the end of the month. Can I just take some contact details—”

“I’ll contact you,” he replied with a smirk. “Have you got a card? Oh, yes.” He picked up one of the piles she’d clumsily knocked over the last time he’d been there. “Your number isn’t on it, though.”

“No, I usually communicate via e-mail.”

“I prefer to use the phone. Write your number on the back for me.” She bristled at his tone. “Well I don’t usually—”

“No, but this isn’t a usual situation, Felicity. Please write your number down for me.” “No.” Felicity discovered her backbone. She wasn’t going to budge on this one. It was a matter of personal safety. “I don’t give my number to anyone I don’t know, erm, intimately.” She blushed again and questioned her use of vocabulary.

“Fair enough. I shall just have to get to know you intimately then, Felicity. And what a delight that will be.”

His piercing eyes held her to the spot. Felicity wasn’t sure if she was going to explode from fear or delight, or both.

“I think I already know a secret about you.” He nodded. “Really?” She tried desperately hard to keep her tone casual.

“Oh, yes.” He leaned over the table, beckoning her to come closer. She did, with trepidation.

“You want me to spank you.”

She recoiled physically from his words. How could he know that? She barely knew that, but deep inside, those words resonated, because they were the truth. She did want him to spank her.

“I can see it written all over your face, Felicity. Don’t look so surprised.”

“I—” She shook her head, determined to tell him he was talking out of his backside, that he was rude and egotistical and she didn’t want anything more to do with him.

His stare penetrated her secret places where she hid her deepest fears and longings. “Don’t lie to me, Felicity.”

Her natural instinct was to tell the truth. Brought up in constant chaos, never knowing what was truth, falsehood or fabrication, she found it difficult even to tell a white lie. But she wasn’t lying. She didn’t want what he was offering. She couldn’t do. It was all very antiquated and weird. It was just a passing whim, a curiosity. She didn’t really want to know what it felt like to be struck by his palm or an instrument of his choosing, did she?

“I will give you half an hour to ponder, then I will come back here with a onetime-only offer. If you say no, that will be it—the end of our interactions. If you say yes… Well, then the fun will begin.”

He smirked again and Felicity looked down at her hands, which she was fiddling together nervously.
“I will ask you if you’re willing to submit to me. Then I will set you a challenge. If you complete that challenge, I will open you up to a world of sensuous delights. Do you understand?”

Did she? He was being very vague, but somehow she got the message loud and clear. “Yeah.” She nodded. “I understand.”

“Oh, Felicity, you disappoint me. I’ve already told you how to address me.”

She looked up again and saw him staring sternly at her. She automatically held her hands behind her, as if she’d been reprimanded for fiddling.

“Say it properly,” he demanded.

“Yes, Sir. I understand.” She let out a shuddering breath.

“Better.” He nodded. “Okay, Felicity. I shall see you in thirty minutes. Be ready.”

And of course, the moment he left, several people crowded her stall, and she didn’t have any time to think. Her first instinct was to tell him no. She didn’t need the work. She didn’t need the hassle and she certainly didn’t need him. But as the thirty minutes ticked down, she became less certain of her assertion. This was an opportunity she’d never receive again—an opportunity to try out something wild, something brave. Felicity had never been wild, not once, and a spark of rebellion deep in her soul flashed at the thought of it.

But could she do it? She wasn’t sure and that made her nervous. Felicity liked to do everything well and had never taken on anything too challenging because of that need to please. She’d limited herself to tasks she knew she could do proficiently, so she would receive praise. She’d never submitted to a man before, never undergone a spanking. What if she was really bad at it?

She still hadn’t decided if she could do it when he came back. She was busy showing a lady in a top hat covered in cogs her selection of steampunk jewellery when she caught his profile out of the corner of her eye. He stood confidently at the other end of the table. He wasn’t fidgeting or pretending to admire her stock. He stayed there and waited for her. She didn’t look at him, but she was very aware of his presence.

She prayed the lovely steampunk lady would be indecisive, that he’d get bored and walk away. But the lady knew what she wanted and the transaction was over in a matter of moments.

“So, Felicity, you’ve had time to think.”

She strode toward him boldly. She was going to say no. She was sure she was going to say no. She had the barrier of the table between them, so she would say no. When she got to the far corner of the table—only a few strides but her legs wobbled on each one—he reached out and took her hand. She tried to pull it back, but he held her fast. Poised over the table, his long fingers hot against hers, she imagined them touching her in other places. Her cheeks flamed with the improper thoughts that bloomed in her mind.

He said nothing for the longest time. She avoided his gaze and it was only when Felicity looked up into his startling eyes that he spoke.

“Will you submit to me?”

He didn’t lower his tone. She was convinced everyone in the room had heard him. A furtive glance around seemed to show that no one was paying any attention to them. They were too absorbed in their own actions.

“I’ll only ask the once, Felicity. What’s your answer?”

She looked into his eyes and her thought processes, her strength of will, her logic, crumbled. All she was aware of was him and her overwhelming desire to let him have her in any way he wanted. She didn’t understand it, but she felt it, and for once in her life, she did something brave.

Pick up your copy of Something Brave from Totally Bound today: https://www.totallybound.com/book/something-brave

Victoria Blisse is a mother, wife, Christian, Manchester United fan and award winning erotica author. She is also the editor of several Bigger Briefs collections, and the co-editor of the fabulous Smut Alfresco, Smut in the City and Smut by the Sea Anthologies.

Victoria is also one of the brains behind the fabulous Smut events, days and nights dedicated to erotica, fun and prizes. Check out http://ilovesmut.uk for more details.

She is equally at home behind a laptop or a cooker and she loves to create stories, poems, cakes and biscuits that make people happy. She was born near Manchester, England and her northern English quirkiness shows through in all of her stories.

Passion, love and laughter fill her works, just as they fill her busy life.

To find out more check out http://victoriablisse.co.uk 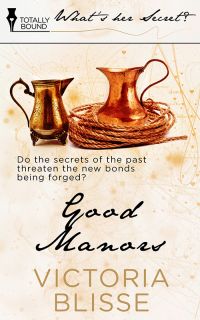 Oh my! This is enough to leave me breathless. You've caught the excitement beautifully.

Thanks for being my guest--and for the giveaway! Now I'm off to announce it.

Wow, that was amazing. Thanks so much for sharing. I would not submit but I might ask someone to submit.


Thank you for the great excerpt.
I don't think I would ever submit except in my mind when i read. I'm always in charge and can never see myself giving up control in real life.


Thank you for the great excerpt.
I don't think I would ever submit except in my mind when i read. I'm always in charge and can never see myself giving up control in real life.

Thank you for the great excerpt.
I don't think I would ever submit except in my min when i read. I'm always in charge and can never see myself giving up control in real life.

Enjoyed the snippet you shared... as for submitting, it would have to be the right person... someone I could truly trust.

Thank you for hosting me, Lisabet and for your kind words. It's always a pleasure to visit here. :)

Thank you for commenting, The beauty of reading is that we can be someone else for a little while. :)

awesome excerpt :) I don't think I could "submit" to anyone in real life.Which is why I like to read about it :) Thanks for sharing!

I submit every day to my Dominant. Reading about it opened the door to doing it in real life...
Amy/ paganlady0505 (at) gmail (dot) com.