I’ve known Amanda Earl for nearly a decade, having met her (as is the case with so many other fellow authors) through the Erotica Readers & Writers Association. She contributed two stories to Cream, the ERWA anthology I edited in 2006. However, I didn’t fully appreciate Amanda’s artistry, passion and erudition until she joined the Oh Get a Grip group blog in 2013. She only stayed a year before moving on to other creative ventures, but that was long enough for me to recognize her for the remarkable individual she is. I was thrilled when she agreed to work with me in compiling Coming Together Presents Amanda Earl.

While editing on this collection, I’ve had the chance to read (and re-read) far more of Amanda’s erotica than I’d done before. In the aftermath, I’m still soaked. Amanda’s stories exhibit great diversity, but all are designed to arouse.

The stories in this book run the gamut from raw and transgressive (“Sir North”, “Daddy Complex”) to wistful and tender (“Typing for Jack”, “Mercy and the Man in the Dark Suit”) to playful (“Cinderella and the Glass Dildo”, “Jesus, Melinda and the Undead”) to desperately dark (“The Vessel”, “Sex with an Old Woman”). In these pages, you’ll find humor and irony, satire and philosophy, and pretty much every shade of pleasure imaginable. Amanda’s fiction explores lust in all its compelling urgency and celebrates the incandescent experience of mutual sexual satisfaction. But don’t look for romance; although her characters may share affection, respect, the thrill of recognizing common or complementary fantasies, she’s not really interested in happily ever after. To quote from her glorious tale, “The Adulteress”:

I'm not going to pine away for the guy after he's gone. Or maybe I will, just a little bit, here in my lonely apartment with the candles burning bright. I might obsess about him just a smidge. Fantasize about fucking him again. Write for hours or days about the encounter or turn to a fresh, blank page. It depends on how good we are together. I suspect my Romanian playwright and I will fuck like gods. Even the way he looks at me turns my knees to jelly, my cunt to cream.

This is literary—and literate—erotica. Be warned, though. Amanda doesn’t mince words. She’s graphic in her descriptions, ferocious in her explication of desire, no matter how wild, dangerous, messy and socially unacceptable its form. This isn’t a book for the faint of heart. I suspect Amanda’s proud of this fact.

Like all books in the Coming Together Presents imprint, this collection benefits a charity selected by the author. Amanda has chosen GMHC (GMHC.org), which provides worldwide AIDS/HIV prevention, care and advocacy throughout the world. Amanda and her husband have participated in the GMHC Walk for Life in Ottawa for a decade. All proceeds from sales of Coming Together Presents Amanda Earl will go toward helping to end the epidemic and improving the quality of life for those living with AIDS/HIV.

So even as you’re squirming in your seat, amazed and aroused by Amanda’s carnal creations, you can know that you’re actually doing a good deed.

[Leave a comment on this post, with your email, and I’ll enter you to win a copy of my speculative erotica story The Last Amanuensis.]

Here’s a bit from Amanda’s story “Matilda Jones Has a Secret”. 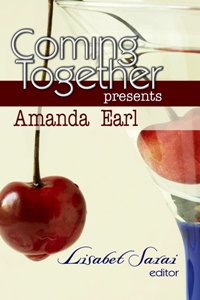 Matilda is also excited to be in a room full of fellow rubberists. They are all either hooded or masked. Some wear gas masks. Like her, the participants would be ostracized by their families and their communities if their activities were discovered. In larger cities, she’s heard that those into rubber are able to walk around in public. That is something she can never do in her small bedroom community. It is enough for her now to have discovered a group of like-minded people.

Matilda smiles and greets a woman in an electric blue spandex leotard. A man in a shiny rubber raincoat waves at her. She is home.

Her master is lounging on a bar stool; he is handsome and masculine in leather and shiny PVC, with an opening that displays his cock, which she notices is already distended. A topless woman in a plaid latex mini skirt licks his boots.

Matilda kneels and waits for his command to crawl to him. She bites the end of the collar and holds it with her teeth while she crawls, taking care not to drop it, because she knows what the consequences will be if she does so.

When she is at his feet, he bends her forward so that her ass is in the air and her breasts are within easy reach. He reaches down and strokes the zippers over her breasts, unzips each zipper slowly and then pulls on a tit, hardening it. He smiles at her quick intake of breath, then does the same thing with the other tit. Matilda’s breasts are now aching with pain and ready to be used. Her master tells her to open her mouth. The collar drops into his hands.

He wraps it around her neck. Matilda feels the familiar and delicious constriction as he fastens the collar. Her arousal spreads from her stomach to the depths of her cunt. He zips her eyes closed. She is now in darkness, with flecks of light glinting through the zipper teeth. All she can do is listen, focus and accept what is about to be done to her. She is responsible for nothing. Everything is out of her control.

She chews her lips as the cold clamps bite into each nipple. She tries not to squirm in desire as she smells the musky aroma of her master’s cock, which forces its way inside her mouth. Matilda can taste a trace of the other sub’s perfume on his cock. Somehow this flagrant evidence of wantonness arouses her even more, firing her imagination and her loins. Nothing is hidden here, nothing is disapproved of. There are no limits.

Her master unzips the zipper at her crotch, ordering her to spread her legs. She loves the throatiness of his voice, the clarity of his commands. She either obeys or he punishes her. It is that simple. She winces as the cold, steel-pointed toe of his boot parts her moist and swollen lower lips.

Her master pushes her down on his boot, ordering her to hump against it until she comes. The boot is still wet from the other submissive’s tongue. A rush of heat spreads through Matilda’s cunt. She can tell by the feminine gagging sound that her master is shoving his cock down the other sub’s throat. Once he has used the girl, she will be dismissed. Matilda’s master will focus solely on using his own personal rubber-clad wench.

Around her, she can hear the snap of whips, the rattle of steel chains, the moans of the others, as if they are all part of some ecstatic symphony. The sounds add to her feelings of bliss.

As she humps her master’s foot, she luxuriates in knowing she is his to do with what he wants and that her sole duty is to be his beautiful and exotic slave, gleaming in black rubber. Her mind flashes briefly to the woman, pale in her pastel frock, her minivan full of groceries, the backseat covered in faded crayon marks. She remembers the Laura Ashley sheets on the lonely queen sized bed her husband rarely bothers to sleep in. Then her master removes the clamps and she howls in pleasure and pain, knowing her loud screams are pleasing him. Sensation drives every thought from her busy, analytical brain as she reaches climax.

Living in a city provides ample opportunity to engage in carnal pleasures. I forget that this isn't the case everywhere. What a scintillating reminder. I enjoyed the flash back to a more mundane existence and look forward to reading more!

i love Amanda Earl too!!!

Squirming in pleasure is good (scooting off to buy this now).

I love Amanda Earl. Thank you for the great excerpt.

Buying this book as I have done with all the others. flubber2kool@gmail.com