[I've got some scifi for you today. Michelle's giving away a $25 bookstore gift certificate, too! ~ Lisabet] 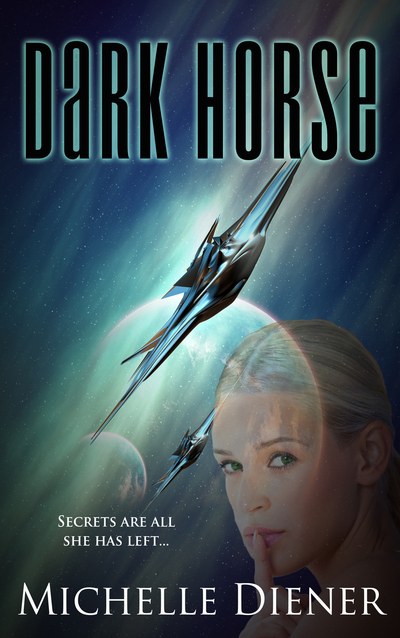 Some secrets carry the weight of the world.

Rose McKenzie may be far from Earth with no way back, but she's made a powerful ally--a fellow prisoner with whom she's formed a strong bond. Sazo's an artificial intelligence. He's saved her from captivity and torture, but he's also put her in the middle of a conflict, leaving Rose with her loyalties divided.

Captain Dav Jallan doesn't know why he and his crew have stumbled across an almost legendary Class 5 battleship, but he's not going to complain. The only problem is, all its crew are dead, all except for one strange, new alien being.

She calls herself Rose. She seems small and harmless, but less and less about her story is adding up, and Dav has a bad feeling his crew, and maybe even the four planets, are in jeopardy. The Class 5's owners, the Tecran, look set to start a war to get it back and Dav suspects Rose isn't the only alien being who survived what happened on the Class 5. And whatever else is out there is playing its own games.

In this race for the truth, he's going to have to go against his leaders and trust the dark horse.

Her jump surprised them as much as their jump surprised her, she guessed, from the way they reacted to the sight of her suddenly crouched on the roof of her little spaceship.

With a hand signal and a barked command, the big guy whoʼd been standing in the middle, the one sheʼd exchanged a look with earlier, had them all letting the cords on their fancy automatic grappling hooks winch them back to the top again, weapons trained on the gryak. He stayed behind, though, eyes never leaving the gryak, and walked carefully to her ship.

He was going to climb up to her.

The gryak had stopped when sheʼd jumped, and gone very watchful when the soldiers had dropped into its cave, but now it prowled up and down in front of her craft, confused and distressed.

The black helmet and then the enormous shoulders of the Grih whoʼd stayed below with her rose up, her rescuer easily pulling himself onto the roof with her.

They stared at each other again, not that Rose could see much of his face through the helmet, and she mentally called up the Grih sheʼd learned over the last eight weeks.

“Iʼm Rose McKenzie. Pleased to meet you.” Grih informal greetings required her to touch her nose to his left cheek, and he to hers, but they were on more of a formal footing, she was guessing, and his helmet was in the way anyway, so she extended her hands palms facing each other, waiting for him to either cover hers or let her cover his. She couldnʼt remember who should do what, right at that minute.

There was a moment of silence, and then the thin, gray-tinted glass on his helmet retracted, and she looked directly into startled pale blue eyes with a dark outer-rim of navy blue. “You speak Grih.”

“Iʼve been studying it.” She looked at him, and tears pricked her eyes.

Sazo had said the Grih were as close to being like her as it got in this part of the universe. But sheʼd thought heʼd been talking in general terms. Bi-pedal, with two eyes, a nose and a mouth. That was the most sheʼd hoped for.

She even thought it didnʼt matter. She would be happy to be alive, and wouldnʼt care if she looked completely different to the people who would hopefully take her in.

Michelle Diener writes historical fiction, fantasy and science fiction. Having worked in publishing and IT, she’s now very happy crafting new worlds and interesting characters and wondering which part of the world she can travel to next.

Michelle was born in London, grew up in South Africa and currently lives in Australia with her husband and two children.

When she’s not writing, or driving her kids from activity to activity, you can find her blogging at Magical Musings, or online at Twitter, at Google+ and Facebook.

Michelle is giving away a $25 gift certificate to one lucky reader. Use the Rafflecopter widget below to enter her contest. You can enter once at each tour stop. You'll find the full list of stops here:

http://goddessfishpromotions.blogspot.com/2015/06/book-blast-dark-horse-by-michelle-diener.html
a Rafflecopter giveaway
Posted by Lisabet Sarai at 3:00 AM

Thanks for having me today, Lisabet.

Welcome to Beyond Romance, Michelle.