Smut with a Smile

Hi, I’m Delores Swallows. Or at least that’s the name I use for the stories I write.

I started writing dirty stories about fifteen years ago, and I did it for my own amusement. By that, I don’t mean I’d sit in the dark and type one-handed. I mean I enjoyed the process of having a dirty thought, thinking up a scenario where it could actually happen, and then writing a piece of fiction to show it happening between characters in a way I hoped was a believable and arousing.

I kept all the stories in a computer file and decided I’d give myself a pseudonym to use as a label on the folder. I chose Delores, which to me is a kind of exotic name. Sometime later I joined an on-line forum for aspiring authors of erotica, and decided to add a surname. The name ‘Swallows’ occurred to me, and I giggled.

I’ve used the name for the on-line forum ever since, and tell people that if I ever write non-erotic fiction, I’ll do it under the pen name Millicent Spits.

Late in 2014 I was encouraged to try and get some of my stories published, so I submitted two stories to different publishers and got two acceptances. Then I was faced with the decision—should I choose a more appropriate pen name? Would people actually be interested in reading anything by someone with a stupid name like Delores Swallows? Well, I suppose the answer to that is ‘of course not’—because I now have twelve stories published and I still don’t own a Ferrari.

But by the time I’d got a publishing deal I’d found my own style of writing, and the tongue-in-cheek name seemed pretty appropriate. And to be honest, I kind of like the name now.

In my real life I use humour a lot. I’ve known from a young age that I have the ability to make people laugh. At school I used to get into all sorts of trouble because I’d blurt out my quip without thinking if it’d be the appropriate thing to say. As I’ve gotten older, I’ve tried to learn how to pass a remark through my brain a second time for a ‘review’ before I let it escape from my mouth. Doesn’t always work. During volleyball last week, a young German woman who’s working in the UK for a few months asked me if I was scared of her (she shouts at everyone if they make a mistake). I said ‘Of course I’m scared of you – I’m scared of all big women’. I don’t think it was the reply she wanted….

I like to think a lot of my stories tend to contain a fair amount of humour. But I think sex and humour are a good mix. Sex can be funny, and fun can be sexy.

Humour and sex tastes are both subjective, so all I can do is write what works for me and hope readers like it. I write about things I find arousing, and include humour I find amusing. I don’t think I’d be able to force myself into an alien pattern in either area. I’m probably not that creative.

I try to introduce most of the humour in the dialogue. I don’t use the ‘double entendre’ type of humour from the old British Carry On films, where any phrase that can be misinterpreted is followed by an exclamation of ‘Oh, Matron!’ To me, that’s more in the realms of ‘pun-ography’. 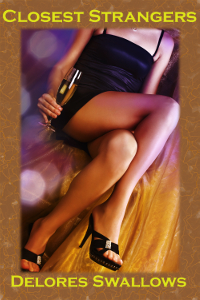 Another story of mine, In the Shadow of The Riot, has a lot more humour. It’s based around a tour of four punk bands in 1979. I was actually a guitarist in a punk band around that time, but the fact I’ve written this story means I can give ‘Historical Romance Author’ as my occupation if I’m ever arrested. Jag liked the look of the bass player. She was tiny, about five-two and really petite. As she played the bass she bounced about the stage, never looking at the audience. It was Mindy’s fellow guitarist who stepped up to the mic and took lead vocals.

The crowd cheered. Muzza leaned over to shout into Jag’s ear over the noise. “Why can’t you write classy lyrics like that?”

“How about I woke up this morning in a stranger’s bed, I was sore up the arse and had a bag on my head?”

Muzza laughed out loud. “Yeah, I can just see Wood singing that.”

My latest story is a little different in one fundamental way – all my others are meant to be ‘believable’. By that, I mean I have always tried to make the stories I write appear like they could actually happen in real life. My latest story is called Stranger than Fiction, and it doesn’t follow my usual pattern. Here’s the blurb:

Ruby's presence starts to impact on James's relationship with his wife, with embarrassing consequences...

To my mind, this story is perfectly set up for all sorts of fun, simply because there are so many ways Ruby can get James into trouble. Here’s an excerpt: 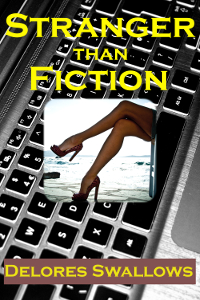 The lights were off and Sally was in bed. James faced the wall as he undressed but when he turned around, in the faint glow from the clock, he could make out Ruby kneeling on all fours on the bed. She was naked except for her shoes, running one hand over her backside.

James worried Sally would hear if he replied, so said nothing. Ruby wiggled her ass a little, and James lifted his hand towards her. She wiggled again, and James’s hand touched her. The skin was cool and smooth. He let his hand move slowly over the swell of her bum cheek, down the outside of her thigh. Ruby moaned quietly as his hand slid around the back of her leg and upwards along the inside of her other thigh. As his hand reached higher he could feel the slickness of her juices. He slid two fingers easily inside her wet sex. Ruby groaned and James finger-fucked her slowly. He inserted his thumb into her anus and Ruby offered vocal encouragement and rocked herself back to meet his hand.

Suddenly the light came on, and Sally looked up at him with a puzzled expression. Hair flattened on one side, eyes getting used to the light, she stared at him.

James looked at himself. He stood with his hand held out, two fingers and thumb protruding like a child pretending he had a gun. He saw Sally’s gaze wander down his body, and James saw with horror he had an erection.

“What are you doing?” Sally was understandably curious.

“Er, sorry. I started to get a bit of cramp in my arm, so I was stretching it a bit before I got in bed.” James knew how lame his excuse sounded. “Probably a keyboard-related thing.” He tried to laugh, but it wouldn’t come out. “The pains we writers put ourselves through.” James shrugged, embarrassed at his own inability to be creative.

Ruby is one of my favourite-ever characters, and she’s relentless in her wish to get James to write her a better sex-life. She wants to feature in threesomes and gangbangs, and is trying everything to convince him it would help his sales:

James crossed his arms and exhaled loudly, letting go of the breath he was going to use to voice his reasons for not using the scene. He waited patiently.

Ruby stared into his eyes and he saw the flame of anger there slowly dissipate.

She let out a breath of her own, pushing her hair back behind one ear. “Thank you. Now, where was I? Number five has gone to the bar, and I’m standing next to the big guy with the rest of his crowd. There’s maybe half a dozen of them, all men in tight shirts and bulging muscles. But the big guy’s obviously their leader—the alpha male. You could put that term in your keywords, Diggy. Maybe increase your sales.”

“Yeah, why don’t we make him your billionaire stepbrother who’s also a were-giraffe as well? That way we can tick a few more boxes.”

Ruby frowned. “Be sarcastic if you want, Diggy, but your books aren’t exactly flying off the shelves. And it’s werewolves or werebears—they’re the shifters the ladies like to read about, not weregiraffes.”

James smiled mischievously. “Ever seen the tongue on a giraffe?”

So there’s a lot of humour in this story, but there’s also quite a bit of heat, too. Hopefully I’ve managed to get the balance of the two about right, and people will enjoy it. I had a lot of fun writing it, but not as much fun as I’d have driving a Ferrari…

You could win a copy of any of the books I’ve mentioned in this post. Just leave me a comment that includes your email, telling me which title you’d prefer. I’ll pick two winners, next Saturday.

Delores Swallows has many dirty thoughts, and during his free time he writes them down in the form of stories. Born and bred in the northwest of England, he has a commoner’s accent and a bit of a crush on his future queen. His stories often feature petite brunettes, high-heeled shoes and voyeurism. He claims he didn’t realise these were obsessions until someone pointed out how often they appear in his work. His latest release is called STRANGER THAN FICTION. It’s his thirteenth publication, but he thinks it’s bad luck to be superstitious.

Free stories and numerous photos of ladies in high heels!

Email ThisBlogThis!Share to TwitterShare to FacebookShare to Pinterest
Labels: Closest Strangers, Delores Swallows, giveaway, guest blogger, In the Shadow of the Riot, sex and humor, Stranger than Fiction

I read Stranger than Fiction last night. It's a hoot!! And very sexy besides. I hope it sells like hotcakes (or whatever you say in the UK).

Bought my copy of stranger than fiction moments ago!!

I would love to read Stranger Than Fiction. I enjoyed your blog post. I shall be looking for you books.
debby236 at gmail dot com

IN THE SHADOW OF THE RIOT sounds like just the thing!

Stranger Than Fiction. I love a story with a bit of humor in it. Thank you for the wonderful contest.

Stranger Than Fiction. I love a story with a bit of humor in it. Thank you for the wonderful contest.

hi All
I apologise for the delay in sorting out the contest. I had trouble gifting via Amazon UK but Excessica came to my rescue. To make up for my slowness, I've decided to send all entrants the book of their choice. I will get them sent out in the next couple of days - I promise.
Thanks again for reading the blog post and commenting. I hope you enjoy the story you chose.
Delores