“Evidence” comes in many sizes

... usually in a skirt that walks out on you with a smile.

Clay Cross began in a small bedsit. It had a bed, a chair and a table, and a blue carpet that coughed dust when you walked on it. It saw the birth of a long and enduring love affair with two unlikely men: two word-mangling gumshoes who used metaphors like shrapnel and lived in a haze of bourbon and dames.

Shell Scott was created by Richard S Prather, a man who must have dreamt books in his sleep. He was one prolific guy, and over the years I acquired his collection in Five Star paperbacks. I mean, what wasn't there to like with lines like:

Constanza Carmocha was unarmed – that is, she didn’t have a gun. She didn’t need one either. She had all the weapons that have ruined men from time immemorial – or time immoral…She was surrounded by a guy who resembled a shaved ape and looked as though he could pick himself up with one hand.

Death is just around the coroner when your name is Shell Scott and you’re a private detective with nose for trouble and an eye for dames.

The other man was Mickey Spillane's Mike Hammer. He just hit me in the face. I loved the genre, I loved him. He was politically incorrect before the term was invented. He had no time for ugly dames and he hated commies.

It was hard to work out who Mike Hammer hated most: reds, ‘yellow bastards’, fags, pansies, or getting hit on the head. He got hit on the head quite often. For the film Kiss Me Deadly, a black and white classic, I bought a bottle of bourbon just to get in the mood. Every time Hammer had a drink, I'd have a drink. Every time he got hit on the head, I'd …have a drink. Problem was that the film condenses a week's worth of alcohol and concussion into 90 minutes and I was thoroughly pissed by the end. I vaguely remember a black box and a sizeable explosion.

From that moment on I walked the mean streets of Newport, wearing my invisible trench coat and fedora pulled low. (I’d learnt the art of soundless dialogue from unmoving lips as a child when my fantasies centred on cowboys and Nazis.) I was Mike Hammer, war damaged, crazy music in my head, the lot. Magic lines from book after book whispered their magic:

I could feel the madness in my brain eating its way through my veins, chewing the edges of my nerves raw, leaving me something that resembled a man and that was all. There had been pleasure in all that killing, an obscene pleasure that froze your face in a grin even when you were charged with fear. Like when I cut down that Jap with his own machete and laughed like hell while I made slices of his scrawny body then went on to do the same thing again and again because it got to be fun…I enjoyed that killing, every bit of it. I killed because I had to and I killed things that needed killing…

Feeney tried to say ‘no!’ but my hands had his throat, squeezing . . . slamming his head to the concrete floor until he went completely limp. I rolled on top of him and took that head like a sodden rag and smashed and smashed and smashed and there was no satisfying, solid thump, but a sickening squashing sound that splashed all over me.

Where as Shell Scott was jokey, Mike Hammer bordered on the psychotic, and the two of them were now duelling banjos, playing their lines in my head, and creating…Clay Cross. Actually it's Clayton Z Cross, anglicised from Clayton Zacrowski because, hell, he was no Iron Curtain commie.

To get more fully in character I sent off several letters to the local newspaper, ‘The South Wales Argus,’ as Clayton Z Cross. The idea was to create the mindset of a bigoted cold war warrior, vulnerable, decent, even well meaning, but possessed of a terrible certainty. To my astonishment they were all published. To my even greater astonishment people took them seriously, some answering back incandescent with fury. To my alarm, a few even agreed with him.

One letter compared the Welsh Nationalist movement, a perfectly respectable organisation, to the Vietcong and communist subversion. There were howls of outrage. By then I knew I was on to a good thing. More letters followed in which he vented the most outrageous ideas in the voice of a misogynist, homophobic Cold War warrior circa 1951. And then he went into cold storage as I couldn't for the life of me find away of bringing a creature of the 1950's into the late C20th without the support of a Zimmer frame, oxygen bottles, and care assistant.

He was resurrected on the pages of an online magazine called On Fiction Writing where he interviewed a host of some very generous writers, with the help of his sidekick, the lascivious and kinky Sheri Lamour. The two of them were outrageously rude, and when the enterprise ended neither agreed to be put back into their respective coffins.

It was a whisper in the dark. Sheri I think, or perhaps April Dawn. Either way a solution was found, and both Cross and Lamour were plucked from their natural habitat and plonked into the centre of Newport, South Wales, in the late C20th. Here they ran amok - and continue to do so--- oblivious to political and cultural sensitivities, and appallingly rude to anything that moves.

I hope you enjoy them.

You can buy the book here http://www.amazon.com/Clay-Cross-Michael-Keyton-ebook/dp/B00WF1X0CC

The excerpt below shows Clay Cross coming into existence. Roy is the tragic figure in a rather dark comedy. He is the comic book writer who gradually finds himself trapped in a comic book world. 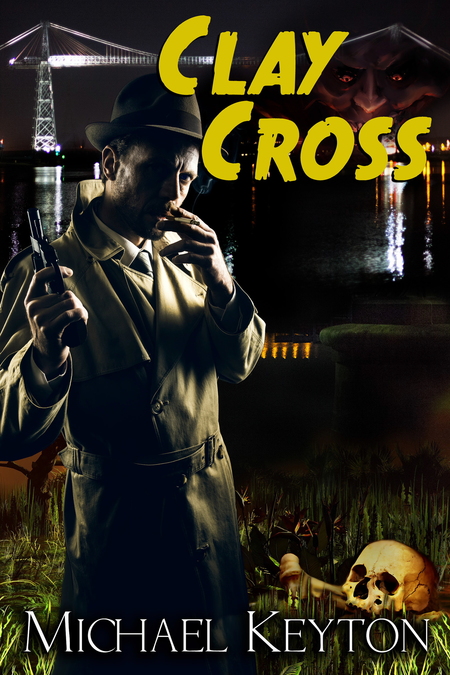 Nothing was his any more.

The thought brought excitement, and with it melancholy. Nothing was his any more. Even the voices weren’t his.

“They found me kissing earth, the kind that buries a man when he’s done with life, much like I was done with mine.

The night would make one hell of a shroud, only there wasn’t much of it left and it was getting shorter by the minute...”

Roy forced himself still. The voice wasn’t in his head. Could he be sure of that? The music was in his head but it also came from somewhere else. Like the voice…between the kitchen and the door to the apartment…He wouldn’t look round.

“…A car screeched by and then stopped. A door slammed shut and I heard the high clicking of heels…a dame, preferably one with a drink in her hand and lips that would make it all go away. She called my name but it made no sense. Jeez, who the hell was I? Had they taken that away too?” The voice lost its monotone confidence, rising into almost a wail.

Roy swivelled round. A face glared back at him and then vanished. He held the image in his mind then projected it to where he’d last seen it. Nothing. The ghost was outside of himself, real and possibly dangerous. He poured himself another drink. Bourbon was good. He stared for a moment at his Smith-Corona, half hidden in shadow, then sat down, pulling the battered type-writer close enough for his fingers to stroke the keys.

The voice came from the window, sounded more confident. Roy turned, slowly, afraid of startling him out of existence.

“She was packed with enough fissionable material to blow the place sky high…and she was looking at me. Maybe I should have been excited, given her some kind of dopey smile and whisked out some flowers from behind my back, but this dame was trouble. A man had been beaten to death because of her and now she had me in her sights. Me…? I’m…I’m…”

Again the vision faded and this time Roy called out.

Michael Keyton has cooked in hospital kitchens, worked in some of the dirtiest hotels in Wales, and played for a time in a semi-professional ceilidh band. He taught history in a warm and challenging school, where he learnt the importance of 'story' and developed an abiding love of Newport. You can find him on his blog, Record of a Baffled Spirit (baffledspirit.blogspot.co.uk)

The photos below illustrate the attraction of Clay Cross. Just vote for the one picture that does it for you. All the people who vote for the most popular photo will be put into the 'randomiser' and one lucky person will either win a pdf of the book, or a piece of art that adorns Clay Cross's office. 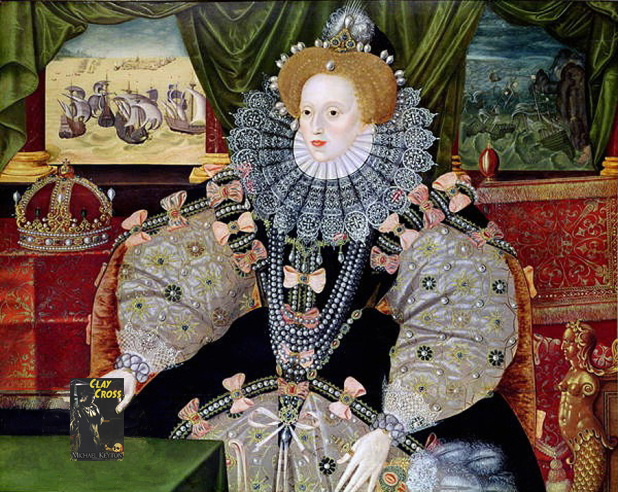 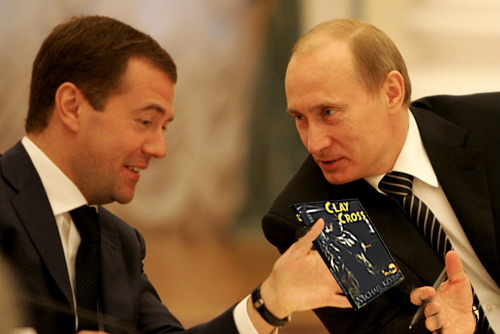 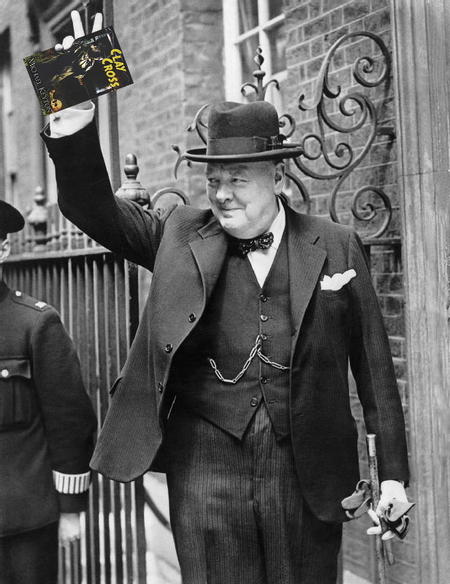 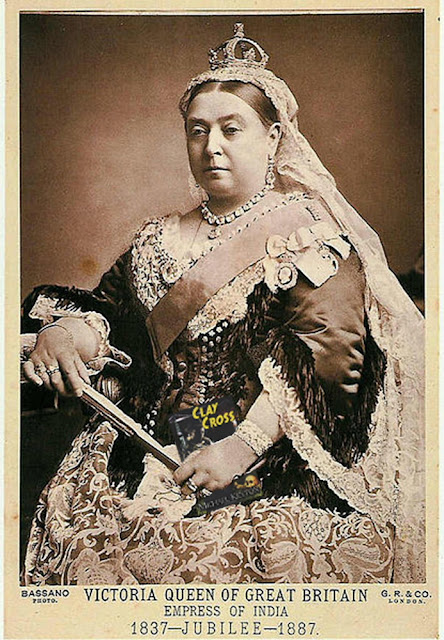 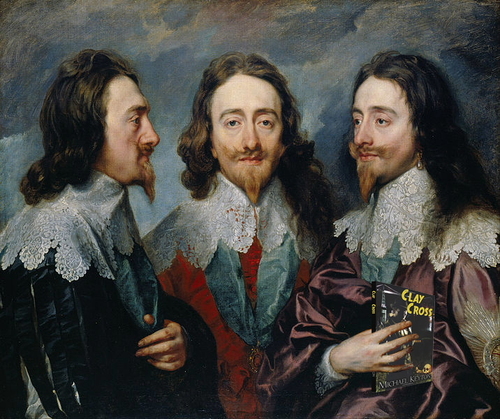 Charles I in three positions, with Clay Cross

I like the one with Vladimir.
debby236 at gmail dot com

Welcome to Beyond Romance, Michael! I remember well being grilled by Clay and Sheri....

I have to go with Putin, though Winston is a close second!

Good luck with the book. It's such a pleasure to see something original coming out.

Lisabet, thank you. It was good of you to host me. And to everyone that enters, may the best man or woman win! It's an open race so far :)