My reader survey ended on Saturday, and I’ve been poring over the very interesting results. As promised, I’ll share the highlights here on my blog. It’s going to take a couple of posts, since there were more than thirty questions in the survey. Some of the results surprised me—and encouraged me.

First of all, though, I want to thank everyone who participated, and to congratulate Kelly, who won the grand prize of a $50 gift certificate. A lucky girl indeed!

I received a total of 201 responses. Of course this isn’t a random sample, since I recruited respondents from my mailing list plus asked my fellow authors (who likely have similar tastes to me, and write in similar genres) to publicize the survey. On the other hand, out of the 170 odd people who included their emails, I’d say at least a third were unfamiliar. Also, in answering my open-ended question “What’s the first thing you think of when you hear the name ‘Lisabet Sarai’?” quite a few people said, “Nothing. I’ve never heard of you before.”! So I clearly did reach some new readers.

Here are the summary results:

(I’ve got to figure out who is buying more than 100 books per month, and get them on my list LOL!)

In later questions, some readers indicated they only borrow books from the library or download free books, but on the other hand it seems the some people have a serious backlog of books they’ve bought but not read yet! This agrees with answers I’ve gotten on smaller and less formal surveys. Some people have told me that they’re really losing ground, with hundreds of unread books in their stack.

Good for authors, of course...

I then asked where they got most of their books. Up to three sources could be selected. Here’s a summary of the results in graphical form. 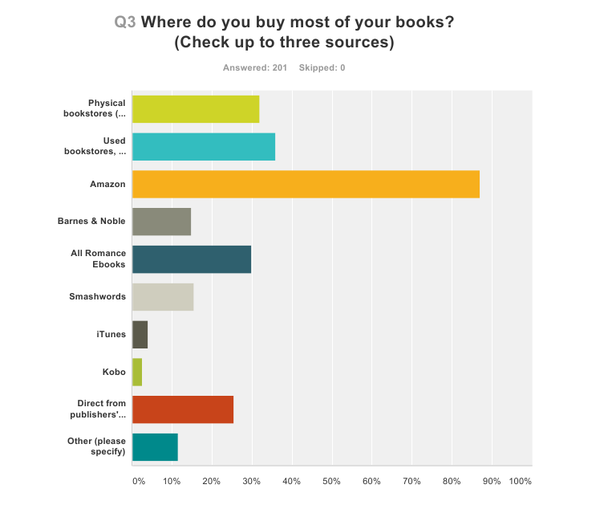 Amazon dominates, but it’s nice to see that physical bookstores are still holding their own, and both Barnes & Noble and All Romance have their fans. This question had an “other – specify option”, and I received quite a few responses, including Bookstrand, Audible, Harlequin, free books for reviews, free book offers, library sales, etc.

Publisher websites get more attention than I'd expected, more than B&N. I should probably have asked which publishers.

I should mention that a few readers said they would never buy anything from Amazon. And in a later question about factors influencing purchase, several respondents said that where the book was available made a significant difference.

For the next question, I asked what fraction of the books they read were ebooks. For this population, e-reading clearly dominates print (though obviously some people are buying print as well, and about 8% are print-only fans). 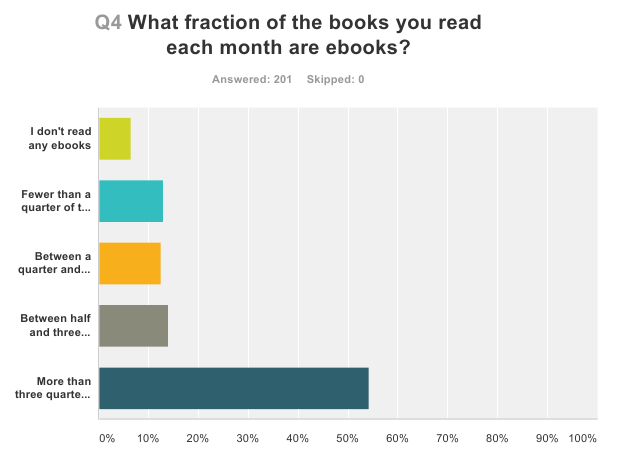 The majority of people reading ebooks do so on dedicated devices like a Kindle or Nook, as shown in the following graph, but other mobile devices and even laptops still have some adherents. 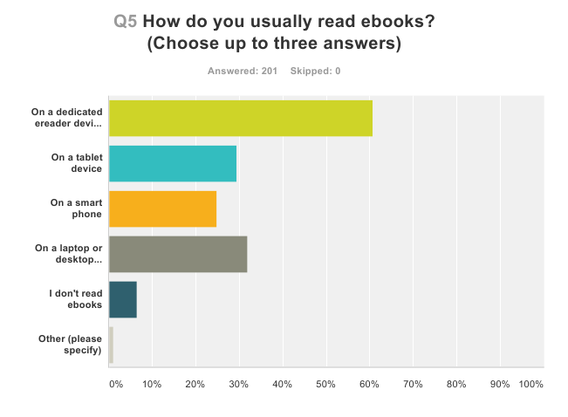 Next I tried to get a handle on what lengths people preferred. I asked them to rate a set of lengths, from the ones they liked most (rated 1) to least (rated 5). Despite what some people have claimed about the attention span of today’s readers, longer works tend to be preferred—though every length has some adherents. Short stories are the least popular, followed by boxed sets.

My personal answer to this question would probably be about 50%, by the way. 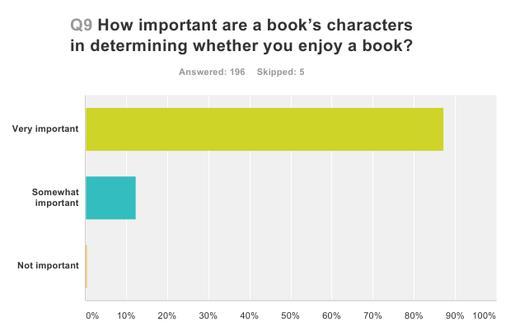 In the past, I’ve felt quite discouraged by this. In my own work, I’m at least as concerned with providing an original premise and an engaging plot, as well as with the clarity, beauty and emotional impact of the writing itself. (I seek these as a reader, too.) However, I have worried that readers don’t really care about any of these things. Based on the results of the survey, I’m wrong. 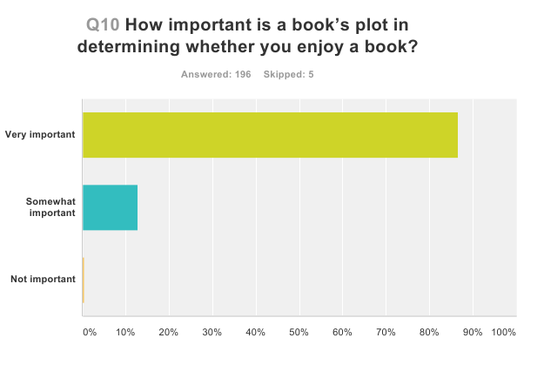 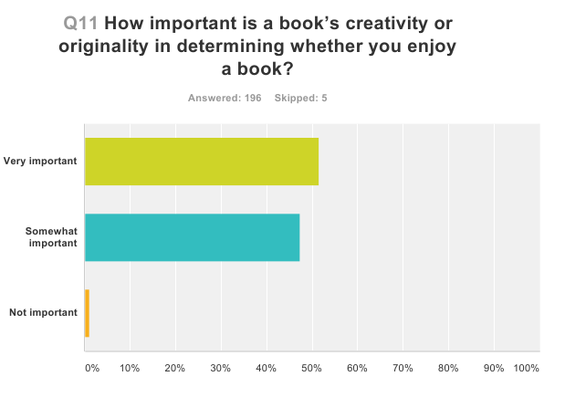 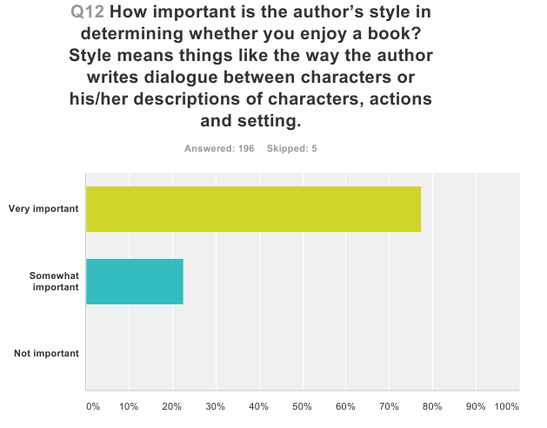 Plot is as important as characters. More than fifty percent of respondents find that creativity or originality strongly affects their enjoyment. And a whopping seventy five percent say style is very important!

I believe that a significant subset of the respondents were authors (who obviously would respect and value writing style). Still, I have to say I’m quite relieved. When I read some of the (pardon my French) crappy writing published these days, I worry that all the effort I put into my work will have zero effect on readers.

Clearly that’s not true. Of course, this doesn’t say anything about sales...!

Anyway, that’s enough for now. I’ll continue my discussion of the results next week.

Thanks for sharing this, Lisabet! I particularly liked your questions about what readers found important in their reading. But ugh, all that romance ;-) I did a similar survey through Strange Flesh Press a year ago seeking similar information. I was heartened by some responses and dashed by others. You can see my survey overview here: http://strangefleshpress.com/readers-survey-results/

Thanks. Many of your results are consistent (e.g. about length, though we defined the categories a bit differently).

The answer regarding release parties and similar events vindicates my decision not to get involved in that sort of thing!