Thanks for having Rachel and Griffin and all the folks from Penhallow on your blog, Lisabet! I’d like to present a copy of The Penhallow Train Incident to a reader who comments on the excerpt. Readers, please be sure to leave your email address in the comment for a chance to win.

The Penhallow Train Incident, my new mystery romance, is set on the coast of Maine in the fictional town of Penhallow. Midcoast Maine sits right about where the state begins to change from heading due north to “down East.” The land is quite different from the southern beaches or the North Woods. Fronting Penobscot Bay, it is a region of lakes, farms, small villages, and lobstermen. Most people have lived there for generations, and refer to anyone who moves to Maine from elsewhere as “from away.” Our heroine Rachel Tinker and her hero Griffin Tate are both from away, but when a series of murders roils their adopted town, they spring into action. 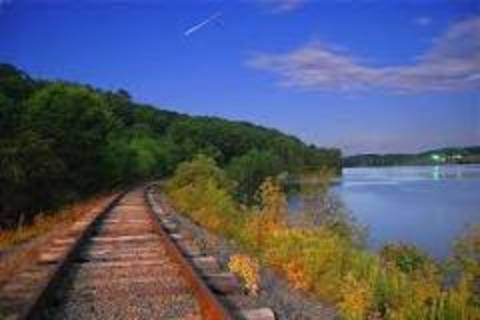 Like many states, Maine is crisscrossed with old railroad beds. The Penhallow Train Incident refers to the fictional Penhallow and Moosehead Railroad. Much like other railways, its heyday came during the 19th century, when it ferried goods, mail, and passengers to many small towns in central Maine. As the story opens, several tourists are enjoying an excursion, complete with a reenactment of a train robbery, when the corpse of a mysterious foreign man is discovered.

Preoccupied with leads relating to the dead man’s presence in Penhallow, our heroine Rachel Tinker is confronted with a new clue. What she doesn’t know is whether it is connected to the victim or to some other, completely different mystery. 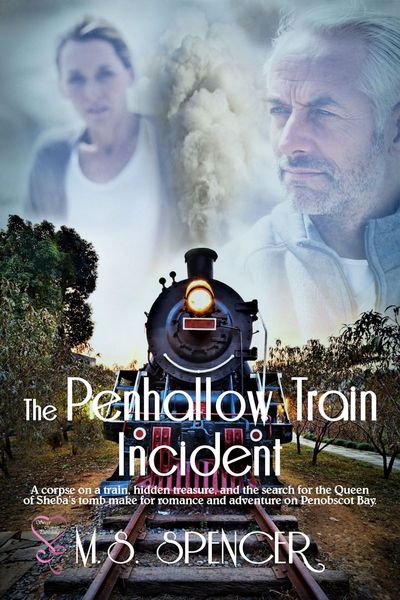 Blurb
In the sleepy coastal Maine town of Penhallow, a stranger dies on a train, drawing Rachel Tinker, director of the Penhallow Historical Society, and Griffin Tate, curmudgeonly retired professor, into a spider’s web of archaeological obsession and greed. The victim’s rival confesses that they were both after a map to the Queen of Sheba’s tomb, and with his help they set out to find it. Their plans are stymied, however, when a tug of war erupts between the sheriff and a state police detective who want to arrest the same man—one for murder and one for bank robbery. It falls to Rachel to solve both crimes…and two more murders, if she is to unlock the soft heart that beats under Griffin’s hard crust.

In this new excerpt, the plot thickens…

Feeling restless, Rachel decided to go back to work. She let herself into the historical society, turned the sign over to OPEN, and went to her office. Immersed in a treatise on the Scottish roots of Penhallow, she didn’t hear the entrance bell ring below. She looked up from her desk to find the woman from the photo standing in her door, her purse clutched to her bosom, staring at her. “Are you Rachel Tinker?”

“Yes. Can I help you?” Rachel thought frantically. How do I call Toby without spooking her?

The front door dinged again. The woman glanced over her shoulder. Then, eyes wide with fear, she tossed the purse at Rachel and ran. Rachel picked it up and, without hesitating, hid it in the file cabinet. Then she went out to the hallway and walked down the spiral iron stairs to the ground floor. The woman stood near the door pretending to examine an exhibit on Main Street businesses. Beside her, the man from the photo whispered rapidly in her ear, his hands balled into fists at his side. She cringed a bit but stood her ground.

Something told Rachel not to mention the purse. “Hello there—can I help you two?”

The man turned. His face was no longer bland. In fact, the rage sluicing from him forced Rachel to take a step backward. He spat out, “Who are you?”

Excuse me? “I am the director of the Penhallow Historical Society. Who are you?”

This seemed to throw him. The woman touched his arm. “Dad, this lady simply showed me where the ladies’ room is. There’s no need to be rude.”

Rachel made a quick calculation. “That’s right. No trouble finding it, I hope?”

“None at all. Thank you.” She took her father’s arm. “This looks like a very interesting museum. It’s too bad we don’t have time to look around right now. Thanks for your help.” She walked out, accompanied by a now rather subdued parent.

Rachel stood in the middle of the hall. What the hell was that all about? Finally she flipped the sign to CLOSED, locked the front door, and stumped back up the stairs to her office. She moved deliberately to the cabinet and pulled the purse out. For a short minute she considered taking it straight to Toby. Then she opened it. 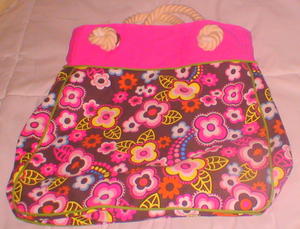 In the main compartment, she found a packet of tissues, a pen, a ten-dollar bill, a comb, and a piece of yellowed paper, folded in half. She unfolded it. It was a deposit slip from the Penhallow Bank and Trust made out for $233.68, dated August 2, 2005.

About the Author
Although M. S. Spencer has lived or traveled in five continents, the last 30 years were spent mostly in Washington, D.C. as a librarian, Congressional staff assistant, speechwriter, editor, birdwatcher, kayaker, policy wonk, non-profit director, and parent. She has two fabulous grown children, and currently divides her time between the Gulf coast of Florida and a tiny village in Maine. 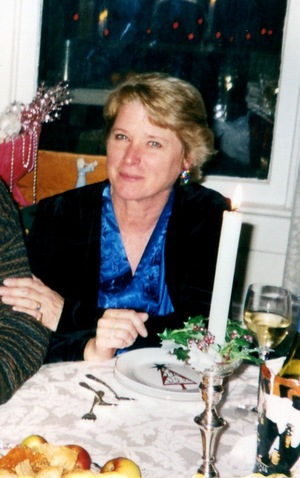 Other Books by M.S. Spencer

Romantic suspense and mystery, they are available in ebook and print from Secret Cravings Publishing and all fine on-line book stores. For more information, visit

Thanks for having me, Lisabet. I hope your readers enjoy the excerpt and leave many comments! M. S.

Sorry I wasn't around sooner to say hello -- the day was crazy!

The Maine coast is one of my favorite places. I've set a few stories there myself. (I lived in Massachusetts for many years).

I'm about to go announce this post to my readers. Apologies for my tardiness.

This sounds exciting. Thank you for the read through.

I don't think I've read a mystery romance yet. My dad drove trains for over 30 years so anything to do with trains interests me. Thanks for sharing the excerpt.
lringel(at)comcast(dot)net