For Love or Money

Some of us write for love. Some of us write for money. Either way, we authors are hungry for reader approval. Perhaps there are some out there who toil away for the pure sake of their art and who honestly don't care whether anyone reads their books or not, but nobody I know personally falls into that category.

As for me, I want to be loved far more than I want to be rich. I want the people who pick up my books to be swept away into the worlds I create – to live, breathe, suffer and lust right along with my characters and to feel satisfaction, even joy, when my story winds to its close. Positive reviews send me to the stars, not because they'll increase my sales (they probably won't), but because they suggest that I've succeeded in seducing at least one reader.

If you worry about your readers' opinions, though, then you can't help but think about market sentiment, which after all aggregates their views. Then you find yourself making choices based not on what you want to write, not on instinct or on passion, but on your perceptions of what is likely to sell. And that truly is a slippery slope. There's a thin line between adapting to the market and self-censorship.

Much of what I write these days gets labeled as erotic romance. I constantly have to sit on my characters so that they'll behave according the expectations of this genre. In particular, no matter how tempted I am to introduce F/F interaction into my stories, I have to resist. I frequently find my heroines wanting each other, but I don't dare let them consummate their desire because it will alienate my audience. Both my readers and my publishers have told me in no uncertain terms: the majority of people who buy and read romance actively dislike any depiction of Sapphic sexuality.

For example, I remember the experience of writing The Ingredients ofBliss, which includes some fairly wild BDSM ménage scenes (M/F/M). Halfway through the book I came up with a kick-ass secondary character, a female police detective named Toni. It soon became clear that Toni had her eyes on my heroine Emily. In love with Toni myself, I desperately wanted to see what would happen if I allowed her to express her interest in a physical way. Emily could easily have been open-minded enough to go along. Instead, I ended up including only the faintest hints of mutual attraction – and then my editor wanted me to scrub those as well. (She objected to some of the other extracurricular sex, too.)

In contrast, I have the creepy feeling that many women don't find their own bodies attractive enough to be erotically appealing.
That's an ugly, scary thought. I hope it's not true. Given how mercilessly the media beat us over the head with images of impossible beauty, though, I can't rule it out. Most of us don't measure up to the artificial ideal, no matter how much money we spend on cosmetics, clothing and gym memberships. Meanwhile, we're told that anything outside that ideal is unacceptable. Our hairy pussies are disgusting; we'd better go get them waxed. A tummy that's not flat as a board, breasts that are too big or too small, flat feet like mine that can't handle the high heels required to be truly gorgeous – we're conditioned to dislike our physical selves.

How many women do you know who truly love their bodies? And how can you love another, naturally imperfect woman, when your perceptions are colored by these constant messages of female inadequacy?

Anyway, there's nothing I can do about market pressures, except to resist the urge to self-censor and try to remain honest. When I'm tempted to let my female characters explore one another, I should yield. I'll never be a best seller, so what have I got to lose?

Just for the fun of it, I thought I'd include an excerpt from the very first F/F scene I ever published, in my debut novel Raw Silk (which is going to be re-released, newly edited and expanded, soon!)  My heroine Kate is in the process of learning about submission from Gregory, who owns a sex bar in the Bangkok red light district. He brings her to the bar, disguises her as Asian, and “forces” her to participate in a live sex show.

Gregory handed her a silk kimono. ‘Put this on, and wait behind the curtains until you hear the music. After that - you'll know what to do.’

‘I know that you won't disappoint me, Kate,’ he added. Then he was gone.

Standing in the dim hallway, Kate fought the urge to run. She fantasized about sex in public places, she acknowledged; she had enjoyed the risk of discovery in her recent, outrageous experiences with Somtow. This was different. How could she fuck a stranger, surrounded by strangers, who were watching purely for their own entertainment? Being discovered in the midst of passion was one thing; deliberately exposing the most private of acts to public view was something else altogether.

She had no choice, she told herself. Marshall had required this of her, and she was bound to obey him. She knew she was lying to herself, though. Mixed with her trepidation was a secret, shameful excitement.

The first wails of the saxophone reached her from beyond the curtain. She recognised the tune. Kate pulled the kimono tight around her, swallowed hard, and stepped into the spotlight.

In the brightness, Kate could see nothing. She moved toward the stage, feeling light-headed. It seemed that she floated up the stairs.

Her partner awaited her.

It was the sweet little vamp who had been Uthai's companion in the previous performance. A woman! Gregory was diabolical.

The Thai woman caught her eye. Kate saw kindness in her face, and amusement. Slowly, she began to untie her robe; Kate did the same. The silken fabric slid from their bodies at the same moment. A low murmur rippled through the audience.

The woman held out her hands to Kate, beckoning, inviting. Kate glided across the stage, the music reaching her despite her fear. They clasped hands, standing face to face. We could be sisters, thought Kate. They were exactly matched in height, and like her, the young woman was more generously endowed than was typical for a Thai

Still holding Kate's hands, her partner encircled her and kissed her, open-mouthed. Kate felt a shock at the woman's soft lips and probing tongue. For a moment, she struggled against the invasion. However, her arms were pinned at the small of her back; though seemingly gentle, her partner was remarkably strong.

Perhaps Gregory has instructed her, thought Kate, surrendering to the strange and delicious sensations of the woman's kiss. There was a faint taste of peppermint. The woman drew back and smiled at Kate.

‘Please,’ Kate whispered. ‘You'll have to help me, tell me what to do. This is all new for me.’

Kate knew little Thai, but she understood the gist. Her lovely companion spoke no English. They could communicate only with their bodies.

The woman's hands were on Kate's breasts now, stroking and fondling. Her touch was unlike anything Kate had known, delicate yet focused, savoring both the smooth skin and the swelling flesh beneath. Kate's hands hung at her sides, awkward. Her partner's nipples, pert and upturned, seemed to wink at her. Come, don't be shy, they seemed to say. We long for your touch. Hesitant, Kate cupped the twin mounds in her palms, felt the silkiness under her fingers. So strange it was, like caressing herself, but with an extra spark. After a moment, she brushed her thumbs ever so lightly across the woman's nipples. Electricity ran up Kate's spine, as the Thai stiffened and then relaxed, throwing her head back and thrusting her breasts forward.

The music changed, moved into a bridge, and the Thai woman regained control. She half-danced with Kate over to one of the poles, so that Kate was leaning back against it. Then she sank to one knee in front of Kate and used both hands to part the hair hiding Kate's sex.

Panic rose again in Kate's throat. With the spotlight in her eyes, she could not see the audience, but she heard their hot breathing. This passionate dance was too private for their gaze. Yes, she wanted this woman, but she would not, could not, allow herself to be so taken under their crude inspection.

Then thought was erased by sensation, as her partner's tongue swept through her sex in one long, hard stroke that ended with a flick to her clit. 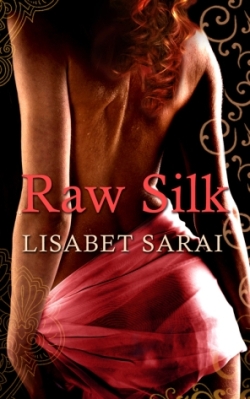 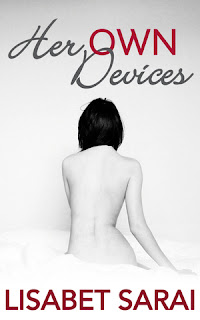 Posted by Lisabet Sarai at 8:34 AM

Email ThisBlogThis!Share to TwitterShare to FacebookShare to Pinterest
Labels: F/F erotica, Her Own Devices, omnisexualtiy, Raw Silk, The Ingredients of Bliss, writing for myself

Since most of our readers are females, it's like you said: they find sexy men hot, so it's natural to expect the sexy men to also find each other hot. Especially when the M/M action is written by a straight woman, writing for other straight women. And multiple pairings will have 2 or more men, 1 woman. I prefer M/M romance written by gay men, because the dynamics feel more real. Most men, even gay men, don't talk about their feelings nearly as much as women do, even in romantic relationships.

But ask any straight man, and he'll say that men are "hairy and disgusting," or some variation on that. Most straight men are so afraid of being accused of being gay, that they won't allow themselves to even imagine 2 men together. But since they find women so hot, they naturally assume that other women find women hot too. And they prefer multiple pairings with 1 man, multiple women.

It's all in your perspective. What you find hot, you assume everyone else does also. And alas, we're not all as multi-sexual as you are. I've heard it said that bisexuals fall in love with the person, not their sex. I almost envy that kind of freedom. I'm so hopelessly hetero.

I realized yesterday, though, that I have several heroes who are sexual adventurers, ready to try anything. Somtow in Raw Silk is like that, but so is Mark in Incognito. I've actually never met a guy who was confident enough of his sexuality that he could express his attraction to both women and men. But I'd like to!

One of my heroes is that kind of man. He didn't have a HEA in "Undercover Lovers",(currently out-of-print, will be re-released) the book he was introduced to the world in. But I'm in the process of writing him a romance now. I've been told by some readers that they didn't like him much, so they're not sure I'll be able to make him a hero. I intend to try. But then, he's older now, and getting mellower in his old age.

I think it's great that your heroes and heroines break the mold.

I'm enjoying "Only One Man Will Do", btw!