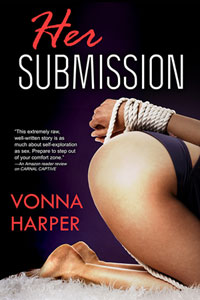 Kaci lives alone, dreams alone. Her traumatic past is behind her, her future faced one day at a time. Her nights are filled with fantasies of dark erotica about being under a shadowy master’s control. but no one will ever know.

Then she’s spotted by a scarred dominant who understands the look, smell, and taste of submissive need. Reno wants her and what Reno wants, he kidnaps.

Her Submission examines the appeal of capture fantasies complete with forced submission, power and weakness, strength and vulnerability, being owned and used. And ultimately—sexual fulfillment.

Her Submission and the other stories in the Carnal series aren't romance. They are intended for a mature audience and are fiction in all ways.

Chiding herself for not grabbing a flashlight, she pondered calling out for Bob, but late as it was, those in the nearby RVs might be asleep. Hoping she wouldn’t stub one or more of her toes, she put down the tool bag and headed for what she hoped was the front door.

She stopped and turned in the direction the male voice had come from. “Yes?”

Whoever it was didn’t respond. Near as she could tell, the man was near the rear of the deeply shadowed RV. He was probably looking at the hookups.

“Do you have a flashlight?” she asked. “Sorry, I forgot mine.”

He didn’t sound particularly elderly, just addled. Taking each step slow, she closed in on what she guessed was the side of the RV. She stretched out her hand, touched metal. Mindful of the angry waiting-for-a-shower wife, she didn’t speak. As she recalled, a number of closely bunched pine trees were at the back of this space, contributing to the lack of visibility.

“Where are you?” she whispered. “My tools—I’ll have to go back—“

A form materialized, startling her. She sensed more than saw a human shape. Years of watching her back kicked in. No one was going to defend her, if she needed defending. She was on her own. She turned toward the shape, folded her fingers into a fist.

Then something slammed into her and knocked her backward onto the ground. Her head slammed against hard earth. A hand clamped over her mouth. A weight settled over her, knees grinding against her forearms and preventing her from lifting them. The man—that much she was certain—grabbed her hair and turned her head to the side with one hand while still gagging her with the other. The way his body rested on her chest, she couldn’t draw a decent breath. Much longer and she’d pass out. Terror lanced her, making it nearly impossible for her to think.

Maybe her attacker knew what she was experiencing because he let go of her hair and mouth. Before she could get her act together, something wide and sticky pressed against her lips. She tried to shake it off, but he stayed with her, hauling her head off the ground and wrapping the gag around her head. He wasn’t content with one wrap. By the time he was done, he’d looped her head a total of three times.

“Step one,” he muttered.

Her heart hammered so she thought it might burst, and when he climbed off her and flipped her onto her belly, she did little more than try to squirm away. He grunted and pulled her arms behind her until her wrists were crisscrossed one over the other.

The splinted pieces of her mind came back together, and she bucked, screaming impotently into the gag. Again he sat on her and held her down, still holding her wrists in place with one large hand. This man knew exactly what he was doing.

“A little risky,” he continued in the same low tone, “but I need to feel alive.”

She didn’t know what he was talking about, didn’t want to care, but her survival might depend on learning everything she could about her abductor. She wanted to fight. Every fiber of her being screamed at her to struggle, but he weighed a lot more than she did and all that weight was holding her down. With her arms wrenched behind her, she stood no chance of pulling them loose. She knew because she kept trying.

He was doing something, moving to the side a little and shifting his weight slightly. She bent her knees in an attempt to slam her heels into his back. No matter how much she strained, however, she couldn’t put enough force behind the effort to make any difference.

His chuckle chilled her.

“Not the smartest thing you’ve ever done as you’ll find out. Now to prepare you for transport.”

Vonna Harper doesn't know and she has given up trying to find the answer. It's enough that many readers are drawn to what some call the dark side. All she asks is that readers understand she writes fiction--a brand of fiction she finds fascinating.

Vonna has lost count of the number of books, novellas, and short stories she's written. What she has no doubt of, it's a hell of a ride.