Whew, where did the week go? It's Sunday again, so of course I have a - um - stimulating - oral excerpt for you, this time from my romantic erotica novel Nasty Business. In case you missed this one, here's the blurb.

Ruby Maxwell Chen, lovely and ruthless CEO of a huge British business empire, is used to getting her way. When she encounters the strangely charismatic American entrepreneur Rick Martell, though, she wonders if she hasn't finally met her match.

From the trendy clubs of London to the Hollywood Hills, Ruby and Rick compete for ownership of a strategic factory in Malaysia. Neither has any qualms about using sexual wiles to smooth the path to success. Neither anticipates that their mutual attraction will turn into something far more intense and difficult to control.

As their struggle for dominance escalates, they draw their employees and associates into their outrageous power games. The stakes could scarcely be higher, as Ruby and Rick play for the ultimate prize: a night of total physical surrender.

When you've recovered from my snog, hop over to Snog Central and enjoy more sexy kisses from other participants in the Sunday Snog tradition! 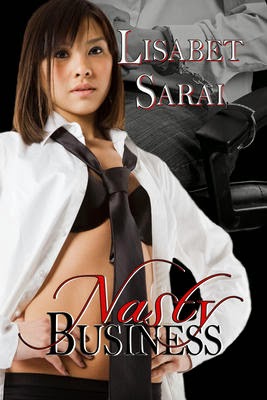 A knock on my door pulled me from the window. "Good evening, Margaret," I said, ushering Ruby's delightful and dedicated assistant into my room. I felt her hesitate on the threshold, and laid my hand on her shoulder in a gesture of encouragement. She searched my face, her own expression a bewildering mix of fear, confusion, anger, and desire. "Do come in. I've been expecting you." I drew her inside and shut the door behind her.

Her mouth opened and closed several times, as though she wanted to speak and then thought better of it. Finally, she waved a piece of paper in my face.

"What's this all about, Mr. Martell? What is this urgent news about Ruby that you need to communicate, this danger to which you refer?"

Margaret watched the two of them for long moments. Her lips were parted; her breath came and went in little pants that told me a great deal about her state. Standing behind her, I reached around and cupped her breast with one hand. With the other, I took from her grasp the note that I had slipped under her door, and stuck it in my pocket.

Through her light cotton nightgown, I could feel her nipples contracting into those hard little buds that I loved so much. With the tip of a finger, I traced a circle around one of them, careful not to touch the nipple itself. She shivered, then spoke, striving unsuccessfully for the same kind of iciness Ruby so expertly achieves.

"So what? Ruby is an adult, and takes her pleasure where she wishes. She's in no danger from Raoul, you know that very well. Though I'm not sure that the opposite is true."

"Raoul can take care of himself." I pinched the inviting nipple with one hand while cupping her mound with the other. Heat and dampness down there. The room filled with her earthy perfume. She sagged against me as I lightly stroked her through the cotton. "What about you, Maggie? What about your pleasure?"

She didn't answer as I slipped a finger between her swollen lips. The nightgown wicked up her moisture. My fingers were soaked in a matter of moments. Liu had told the truth; this seemingly prim, middle-aged woman was drenched in response to the merest of touches.

I burrowed my nose through her chestnut locks and nuzzled her neck. She arched in response, rubbing herself against my swollen cock. As if settling into its rightful place, it found its way into the cleft between her full buttocks. I rubbed it back and forth against the fabric, imagining silky skin underneath. "I can give you pleasure, if you want," I whispered in her ear. "All you have to do is ask me."

She was still silent, but her body spoke volumes. There was tension in this desire, resistance. I raised her gown and caressed the roundness underneath, speaking softly as if gentling a horse. "Don't worry, Maggie. You can trust me. I don't mean you, or Ruby, any harm." Her scent hung around us like a cloud. Heavenly.

Kneeling behind her, I pulled her globes apart and began to lick her. She tasted as good as she smelled. At the first touch of my tongue on her clit, she seemed to stumble. Then she reached forward and braced herself against the wall, arching backward so that I had better access to her. Needless to say, I took full advantage, running my tongue along her folds, swirling it around her puckered rear hole, plunging it as deeply as I could manage into her cunt.

She was still, as if holding herself back. That lasted about thirty seconds. Then she began to move, shuddering, twisting, grinding her sex against my mouth, forcing my nose into her slick depths. I didn't need to question her anymore; she had given me her answer.