OK, nobody likes an aging smut writer kvetching about how wonderful things used to be. But hey, I feel like I’ve earned the right.

Beyond the economics of it all, though, was the emergence of a plethora of new ways of writing about sex. What had been stuffed deep underground was dragging itself out of the storytelling sewer and emerging into the light. Anthology series like Flesh and the Word and High Risk proved that lust could be literate. Richard Labonté, editor of the best-selling Best Gay Erotica series, went out on a forestful of limbs, including in his annual choices both wild-eyed formal experiments and anything-goes content. Susie Bright’s annual round-up of The Best American Erotica—published by Simon and Schuster, fer Chrissakes—included Real Authors such as Nicholson Baker, Jane Smiley, and Anne Rice. Goodbye cheesy little under-the-counter paperbacks like Truckstop Twosome, hello Dennis Cooper!

And then a couple of things happened. First, in significant ways, the porn-publishing industry collapsed, largely because of the rise of the Internet and the cratering of the economy. (And often both combined: most all the early websites that paid for content have either stopped paying or ceased to be.) Sure, thanks to the democratization of communications, anybody can now be an author overnight. But where there once upon a time had been editors who actually edited erotica, publicists who made sure it sold, and publishers who paid advances for stories about dick, now there’s the Great Googled Gay Glut. But unless you’ve written Fifty Shades of You Know What, it’s well nigh impossible to actually carve a career out of writing about cock.

And, even more crucially, gay life has changed, and changed fast.

Now, I’m not all that gung-ho for assimilation. It seems to me that some of the most interesting art is made at the borders of what’s acceptable. But homosexuality has morphed from The Love That Dare Not Speak Its Name into “that cute gay couple down the street with a Labradoodle, matching Subarus, and the baby they brought back from China.” Butt-fucking has gone from “Who dares?” to “Who cares?” Hey, it’s hard to be truly transgressive when anyone can sit in Starbuck’s with their MacBook and download oodles of scat-porn pictures…for free.

Young gay men no longer get their notions of queer life from contraband paperbacks they bought from disreputable dealers in skeevy parts of town. Now all they have to do is turn on the TV. HIV is no longer a death sentence. And gay guys can get married for life. And all that is good. Great, in fact.

Only it’s made writing gay erotica feel less urgent, less necessary. Superfluous, even. And maybe less fun. I feel like I’ve gone from being a cutting-edge cultural worker to hanging on as the last blacksmith in town.

Certainly it’s less rewarding in many ways for me to be “An Author.” I confess: I write to be read, and not just in the bloated blogosphere. And, hey, if I’m a professional, if my writing has any value at all, selling a story should at least pay enough to buy an extra-large pizza and a pitcher of beer. But these days it’s not uncommon to see calls for submission that offer a magnificent twenty-five bucks for first rights. If that.

Just as most people don’t watch porn videos for the cinematic values or great acting, so most readers of erotica, I‘ll bet, don’t give a fuck about literary furbelows or incisive insights into sexuality; they want to get off. They want stories that are “hot,” which means hot to them. Soi-disant “literotica” has just plain failed to establish a large enough readership. I once asked Ian Philips, whose extravagantly smart book See Dick Deconstruct had won the Lambda Literary Award for erotica, how many copies it had sold. He said, as I recall, four hundred, a sad average of eight in each of the United States (assuming a few copies hadn’t made their way to foreign climes).

And anyway, thanks to blogging, Facebook, and Twitter, simply everybody’s an author. Everybody. To quote the quotable Suzy Bright: “The cult of amateurism has swamped the writing room. Its spoils pass for mainstream entertainment.”

It’s hardly any wonder that many of the best authors of that first wave of quality queer erotica have long since moved on. “Aaron Travis” now writes best-selling detective stories under his real name, Steven Saylor. Michael Thomas Ford once wrote dirty tales. Now he writes beach books and stories for young adults. Thomas Roche has moved on to science fiction. And me? Still writing smut.

Sure, it’s possible that I’m just projecting my own career discontents onto the world at large. It’s more than likely that oodles of great new gay erotica is out there, most of it written by people I’ve never heard of. In fact, self-publishing pretty much ensures that. 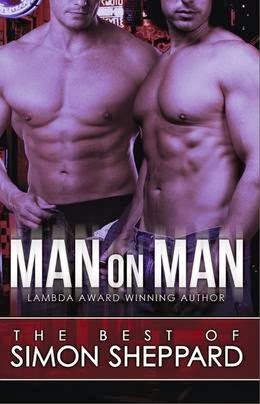 But as for me, I never wanted to be my own publisher, or my own publicist. I just wanted to write excellent smut. I can still set out too do that, of course, while being as weird as I want to be: I just sold an SM story based on the Tibetan Book of the Dead. And I do keep writing books. Sure, my first novel, The Dirty Boys Club, went nowhere, killed at least in part by the fugly cover the publisher chose. Sure, Jockboys, my e-book-only suite of short stories, has probably sold in the high two figures. Still, I was flattered when an e-publisher, Jean Marie Stein, asked me to put together a best-of collection. Despite the feeling that it marked the end of a trajectory, like a lifetime achievement Oscar, I have to immodestly admit that I think Man on Man: The Best of Simon Sheppard, is pretty damn good. Not that anybody is buying it.

But there is—beyond market forces and queer history and the ego grat of knowing someone somewhere thinks your writing’s pretty good—something else. To quote a story of mine about an interviewer tangling with an aging gay pornographer (not really me, I swear): 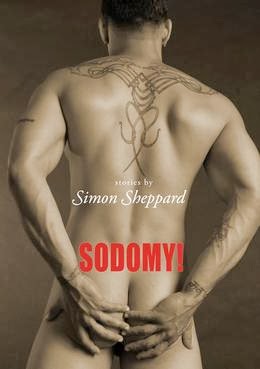 Quilty scribbled furiously. He would have brought a laptop to take note, but he’d been warned beforehand that computers were banned within the sacred precincts of the Witch’s clifftop home. Not even a voice recorder passed muster. Perhaps it was some kind of obscure test, the Labors of Hercules for interviewers. Or maybe it was just the sadism of an old queen.

“And if there’s one thing, my son, that life teaches one, it’s that narrative coherence—hell, coherence of any sort—the fretful workings of a mind struggling to superimpose order on this squalid mess we call life.”

That was a nice turn of phrase: “squalid mess.” Quilty struggled to get it all down.

Yes, stroke stories may indeed have some wider cultural significance, may provide a sticky path to liberation. (Though just provoking someone to jack off is a not-inconsiderable achievement.) But, if I’m honest with myself, I have to confess that the major reason I still, at least now and then, pen a tale about penises is that I do in fact want to get it right, to not only celebrate male lust, but to get the truth of it down on the page.

Sure, that sounds pretentious, but I’m stuck with it.

And maybe that’s not such a bad thing to be stuck with, after all.

Simon Sheppard is the author of nine books about sex, most recently Man on Man: The Best of Simon Sheppard; Jockboys; Sodomy!; and The Dirty Boys’ Club. He also is editor of Homosex: Sixty Years of Gay Erotica, which won the Lambda Literary Award, and over 300 of his stories have been published in books, magazines, and online. San Francisco Magazine once dubbed him “our erotica king,” and he still lives in the City, gentrification be damned, with his husband William. He hangs out at www.simonsheppard.com. 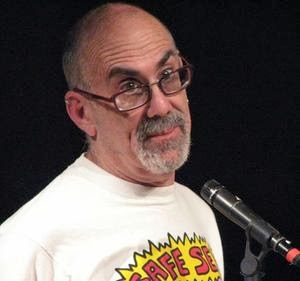 And I remember my first personal contact with you, when you submitted your story for Sacred Exchange. You insisted on being paid more than I was offering for stories of that length, and I have to admit, I was annoyed, though I really wanted your piece. I have a lot more sympathy with your position now.

Thanks so much for being my guest.

Simon, you are too modest. Your work (what I've read anyway) was never only about getting off. In the body of your post, you haven't even mentioned Sodomy! from which your excerpt was taken. Brilliant stuff. You're still blazing a trail.

In case any of you haven't read Sodomy!, you might like to read my review from a few years ago at Erotica Revealed. I loved it!

I would - in case anyone is still reading this - to correct something of a misstatement re: The Dirty Boys' Club cover. The publisher did not in fact "choose" the cover design. He chose, unilaterally, an artist with whose work I was unhappy and who I felt was not a good match for the project. But short of scrapping the whole thing and coming up with a new design on my own, I was stuck.