[My Monday sneak peek is Betrayed by Ginger Simpson - a dear friend and one of the most skillful storytellers I know. Enjoy! ~ Lisabet]


Note from the author:  Betrayed is based on a true-story and delivers a message that everyone can benefit from.  This is NOT a romance, rather a relationship story, and the explanation at the end of the book will clear any questions you might have.  I hope you enjoy my book, and given the fact that my computer crashed, I had to redo the manuscript on Text Edit, transfer to Word Perfect and then transmit as a Word document, I hope you'll overlook any errors you may find. 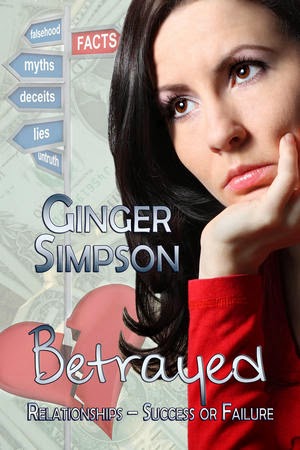 The advertisement claimed: "Find your true love; we'll match you with the person of your dreams." Their irritating spam clogged her computer inbox. "Free tonight? Let’s chat." Cassie Fremont thought of hitting the 'trash' button, but the promises were alluring. Divorced and so lonely, Cassie signs up for the on-line dating service. What she doesn't know is the cost of the ticket for her ride on the romantic roller coaster from hell. You aren't the first woman he's lied to. When Cassie's siblings present her with evidence, insisting this proves her new beau is a con-man, her world is shattered. Her happiness wanes. How can she possibly believe that this wonderful man who gave up a thriving business in Texas and moved to California to be with her isn't all he professes to be? The love she sees shining in Evan's eyes can't be false. Surely, her siblings are mistaken. Still, the warnings of her sister's haunt Cassie's thoughts: There have been others who have lost everything because of him. Faced with an ultimatum, Cassie must choose between her family and Evan.

Cassie lay next to Evan and gazed at the ceiling. His heavy breathing slowed as hers did. The feel of his caresses still lingered on her breasts, while her nether region finally relaxed from the orgasmic contractions. His lovemaking satisfied her soul.

Rolling to face him, Cassie twined her fingers through the soft fur matting his chest and nestled her head on his shoulder. Her cheek adhered to his damp skin. His eyes closed beneath a brow beaded with sweat.

"Hey, cowboy, are you going to fall asleep on me?"

She chuckled and rolled away.  "Well then, I'm going to take a shower."

He reeled her back.  "Would you like some company?"

"Sure, c'mon." Cassie scrambled off the bed, but old-fashioned modesty deemed she wrap her bathrobe around her nudity before she hurried into the bathroom.

As soon as the water warmed, Cassie stepped inside. Evan slid open the door, and she moved aside to give him room. He entered and ducked his head beneath the shower head, letting the water trickle down his face. His handsome profile renewed her internal warmth, and she thanked her lucky stars she'd taken a chance on joining a dating site.

She rubbed the soap between her palms until bubbles formed, then lathered Evan's broad back. His muscles contracted beneath her touch, and he moaned.  "Ohhh, that feels almost as good as sex."

"Well, now it's your turn." She handed him the bar.  "One good back wash deserves another."

He batted water from his lashes and grinned.  "I'd much rather wash your front."

Despite the heat rising in her cheeks, her checked emotions renewed. A moment ago, she'd been spent, but now she craved his touch, his kiss. Warm water drizzling between their molded bodies further ignited her passion. Rivulets ran between her breasts and trickled down her stomach. He lapped the liquid from her chest, teasing her nipples and splaying his fingers through her pubic hair. Despite her attempt to foster his arousal by grinding against his hand and kissing his ear, evidence of his renewed desire didn't develop.

Evan pulled away, his eyes dulled with an apologetic look. "I guess I already gave you my all."

She understood and nuzzled his neck.  "Don't feel bad, sweetheart. I think we both expected too much, considering we just had fantastic sex in the bedroom."

"But, I don't want to disappoint you."

Evan stole the words from her mouth by dropping to his knees. She threw her head back and held her breath as he sought the bud of her womanhood and found it. With lips firmly latched, he suckled the strength from her, turning her legs so weak they barely supported her weight. She clung to the walls until her trembling body could stand unaided.

Evan rose and pushed his sodden hair out of his eyes. A 'Cheshire cat' smile appeared on his face. "How about ordering a pizza? I'm starved."

While Evan dried off, she soaped herself and rinsed. Stepping from the shower, she stood on legs still wobbly from Evan's oral ministrations, and peered into the mirror. Her reflection resembled that of a drowned rat, but her complexion sparkled with an afterglow caused only by sex. She suppressed a chuckle at Evan's ability to move from an extremely romantic moment to a sudden desire for pizza. He was quite a guy - in more ways than one.

"Based on the true story of the author's sister, this novel builds tension as it goes. It grips the reader and throws them into a whirlwind of emotion from anger to joy and everything in between. It is a powerful book of vulnerability and strength, family loyalty versus true love. A must read for every woman." ~ Mirella Patzer, Historical Author

"I found this to be an engaging story and the characters very believable. In this high tech age we need a reminder that not everybody is good and decent and we need to have our guard up in the faceless world of the internet." ~ Carol Langstroth, Mind Fog Reviews