I love romance and I'm proud of it!

Thanks so much for hosting me on your blog today, Lisabet. I thought I’d talk about something very close to my heart – romance! Plus if you keep reading, there’s a naughty excerpt from my new release Kinky Bet!

You know before I became a romance writer I used to be a closet romance reader. There was no limit to the ends I would go to hide my secret addiction. I would read my treasured books in the privacy of my own bedroom. I would buy them from shops where no one I knew was likely to see me. I even, and I am really embarrassed to admit, bought birthday cards and mothers day cards along with the books and pretended to by getting them as gifts. Can you believe that? I was one sick puppy!

You know what it's like. Those looks of amusement accompanied by those superior attitudes.

"Oh, you're reading one of those books are you?"

Then, the heated blush would appear out of nowhere. My tongue would swell and dry at the same time and conveniently stick to the roof of my mouth.

Then came the knowing grin.

"Of course we all know those books are so degrading to women. And the stories are all the same. You know they all follow a strict formula. Anyone could knock one up on a weekend."

And so it went for so many years. Holding magazines up over the book I was reading in the train so no one would see the cover. Spending a fortune on greeting cards I didn't need.

But one day all that changed. I decided to write one of my own.

I found kindred spirits. Hundreds upon hundreds of women (and men) worldwide who shared my passion. They GOT me!

It was so amazing and such a relief to find out that I could converse about my favourite genre, or gorgeous hero in a safe environment where no one would show me scorn. Yippee!

It was empowering. And with power, came courage.

As my writing became more serious and I started to think about getting published, I found that I wanted to let people know.

"What do you do for fun?" people would ask.

"I write fiction stories," I would answer.

This is when I would gulp, take a deep breath, and think to myself - what the heck..."I, er...I write romance fiction."

I would then sit back and wait for the snarky remarks but guess what happened?

Then the person would move closer to me and whisper, "I love reading romances. They're so relaxing aren't they?"

And this was not an isolated response. Even the men I confessed my secret to were so very supportive. In fact one even asked me for help with his own romance novel.

Who would have thought?

And you know what? I'm proud of it!

Here’s a snippet from my latest romance, Kinky Bet!

Who knew losing a bet could be this much fun?
Erica Nielsen agreed to a bet with her best friend, though she never imagined that losing would involve a weekend of punishment at Dangerous Liaison, a BSDM retreat. But is it really punishment being trained by a sexy Irishman who takes her on a sexual journey of a lifetime?

Conal Brennan agrees to help a young woman find her submissive nature. He always enjoys being the one in control, but one look at the Nordic blonde he calls ‘Fire girl’ and he’s not sure who’s controlling whom. 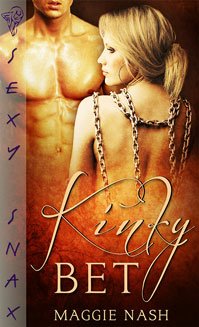 Erica held her breath until she heard the door close then let it out in a rush of air. She opened the file on the desk and started reading. Her body heated while she read the list of preferences for domination and submission, fetishes and toys. She probably rushed through it too quickly, ticking ‘yes’, ‘no’ and ‘hard limit’ in quick succession, wondering if she would live to regret the amount of affirmative answers she had given. Oh well, she thought, smiling remembering her response to Nicole’s bet while she signed the consent form. In for a penny, in for a pound.

She placed the folder back on the desk and the door opened. She turned to see a young woman dressed in a short leather skirt and plain white T-shirt enter the room. Her breasts showed through the transparent material, reminding Erica that she might soon be similarly displayed for all to see.

“Come with me, Miss Neilson.”

Erica rose and followed her out into the hallway and up the stairs. Conal’s assistant walked quickly and Erica struggled to keep up with her while she was led to a room on the second level of the house. The girl opened the door and stood back, ushering her inside.

The assistant followed her in and closed the door behind her. “You must remove your clothes now.”

Erica’s pulse kicked up several dozen notches. She’d never undressed in front of another woman before. Not even her mother had seen her without clothes since she’d started puberty and had begun the whole poor body image thing, so this was new for her. This woman didn’t seem to notice her reluctance because she walked past her to an adjoining room. The sound of running water reminded her that she was here to enjoy herself, so she might as well get into the spirit of things.

She almost lost her nerve, however, after she removed her dress and placed it on a small padded cushion. At this moment in time she couldn’t decide if she was going to kill Nicole or be forever in her debt. Either way she’d committed to be here now so unless she wanted to leave without having any fun at all she needed to cooperate. It was now or never.

“Do you require assistance?”

The assistant waited patiently while Erica fumbled with the catch of her black lace bra. She resisted the urge to cover herself when it was taken from her. Before she could think too hard about it, she slid her fingers under the elastic of the matching G-string and removed the last scrap of covering from her body.

“I guess if we’re getting acquainted I should know your name.”

The girl lowered her head, her eyes to the floor. “My name is not important.”

Erica crossed her arms and shifted her weight from one foot to the other as a cool breeze tickled her skin. “Come on, I’m naked here. Surely that qualifies as friendly.”

She lifted her face, her eyes showing a hint of an apology. “My role here does not require for my name to be used. I am here to serve Master Conal.”

Erica stood and stared for a few more seconds, pondering exactly what this girl’s role was, and why she would want to be subjugated to a level that took away her name. Apparently, since everyone was here by choice, she must want it that way, so who was Erica to judge? “All right, so I’m naked. What’s next?”

You should be proud to tell people Maggie, your books are awesome.
I remember covering a romance book with contact (like you use on school books)I was embarrassed by the cover.
Now I proudly display my own book cover on my phone case :)

Thanks Donna...I should pay you!
I reckon the more people are proud - the more people will admit that they actually love it! So many closet romance readers out there...they need to come out!

Welcome back to Beyond Romance, and congratulations on KINKY BET, which sounds like a very sexy book.

It's funny, I *never* read romance. And yet my first novel was a romance, more or less (if you make some allowances for multiple partners). I guess even I'm a sucker for the notion of true love.

Especially with a liberal quantity of D/S thrown in...

Just realized my comment was ambiguous. I meant, I never read romance in the past, before I started writing/publishing it.

That cracks me up that you hid your books and bought greeting cards. Only buying lube at the drugstore gets me slightly embarrassed. Lol. Everything else I'm good.

I can relate to Lisabet in that I started reading romance once I started writing it. Now I consume loads of it! I feel like I have years to "catch up" from when I was reading other things.

Best of luck with your book, Maggie. Looks like a winner!

LOL...I knew what you meant Lisabet :-) I think a lot of books are romantic. It's not the cover or the label that makes them romances. I think that's a lesson I learned when I started opening up and talking about my addiction to romance novels :-)

Thanks Normandie! Let me know what you think :-)

Yes, I was a closet romance reader for a long time! LOL...

Coming in here very late, Maggie, but I really enjoyed your post and I know that feeling of thinking I needed an excuse as to why I might be buying a particular book. My local librarian says in the past year there are heaps more women openly asking for romances of all heat levels. And this is at a small, country library. It's nice to see attitudes changing.

I loved your excerpt. Hope it does really well for you!