Hi everyone, before I start, I’d love the thank Lisabet for having me over to visit!

I’m an aussie girl, who writes in lots of different genres... so long as they are sexy. Lisabet mentioned my road to publishing... so I thought I’d shine a bit of light on where I am and how I got here as an author.

I guess like lots of authors, my story started in the dim dark distant past. The furtive reading under the covers well after lights out. Ahem, I began the journey with Barbara Cartland (uh huh, I was one of them) and Nora Roberts very first title, Irish Thoroughbred. It’s been a long and somewhat windy journey.

When I first started out, it was historical. I would walk down to the mobile library every week and borrow five books. It didn’t matter who they were by so long as I could devour them in the week. Of course, over time, my reading habits changed, just a little.

The more I read, the more I wanted to read, but time, life and children got in the way. After I stopped working (and had my stay at home mum time) I rediscovered Mills and Boon, we moved, tons so it was whatever I could find in any library nearby, and Mills and Boon are a staple. But I also discovered books with higher sexual tension, bigger and more fulfilling stories. They hooked me.

I discovered stories in series had changed from my earlier reading fare. (What an eye opener) And ones that didn’t mince words when it comes to the intimate scenes (of course I’d also done the whole Blaze thing and my husband had even bought me the odd Black Lace title...) but they drew me. I was so over the moon!

The likes of Lynn Viehl and Sherrilyn Kenyon were my initial guide and then I sprung into other genres. Hello JD Robb and Kalayna Price.

Then I bought a bookstore. Ahem... Yes. At that point the rot really set in (if you’ll excuse the analogy) and I was back to my voracious 30 books a month habit. Gah! I also got involved with the ARRA and as a bookseller, I became the sponsor of the ARRA Romantic Suspense Award. It was natural that I would attend their conferences.

The final nail in the coffin... I went to the Bondi conference in 2011 and “caught the bug.” I was sure, when I came home I was going to write a novel. And I did... 3 months, no housework, bookstore duties fell on the kids and the dog thought he’d been abandoned.

The final piece actually was my first ever novel. Starline was born and I haven’t looked back. The only proviso my husband gave me was it wasn’t allowed to be a fad. So here I am 14 contracted/published books later. I think it’s gone past a fad ...

Of course another of my favourite themes includes military and service hierarchies. (I’m a closet English Naval girl really! I suppose it could be a part of why my bio picture is what it is...) But anyway, it allows me to play with a range of concepts.

And the Argh! Me Hearties? Well, in case you haven’t worked it out, I try not to take myself too seriously. My official bio picture is actually me dressed as a pirate on the Pacific Dawn, right in the middle of the 2013 Queensland Floods (not that we actually knew about them when that was taken!) 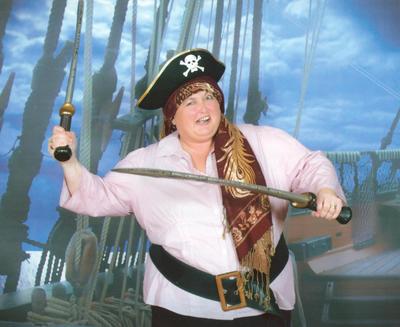 So where has writing taken me, so far? These days, I let the muse direct me. To date, I have my first Science Fiction series completed and a little futuristic story. Later this year I have a number of Total EBound releases coming out. They range from Blame The Wine (a light contemporary novella with paranormal themes) to The Blood Bride with deep paranormal overtones. I also have a contemporary coming and my first ever romantic suspense.

I like variety, as it lets me mix it up and try out new ideas. My current WIP is actually a very dark Paranormal romance with Demons, Angels, Fey, Nymphs. Everything coalesces into a fight for one woman’s soul.

I’m also more than just an author... I grow chooks and make wine... I’m the mother of two girls and a wife to one man. (*winks*) I love to cook, make my pasta and pizza and adore cooking and of course reading.

But because variety is the spice of life, I thought you might like a look at my latest title Blame The Wine. And just because you are great readers, I’m going to offer a copy of Blame The Wine! Woo Hoo!Just leave a comment with your email, and you'll be entered to win!

Cara and Dillon, two clueless lovers are on their last chance get a little a little help…of the supernatural kind.

Cara is stuck. A job going nowhere and a hankering for the sexy gorgeous boss who doesn’t even know she exists. Fate, in the guise of a temp position arrives…Where will it lead?

Dillon is a geek. No other word could possibly describe him. He may be sexy and super brainy, but he’s totally clueless with women and especially the sexy plus size Cara. But when his PA takes emergency leave before her wedding, the luscious Cara is the best applicant for the position. It’s an opportunity he can’t pass up.

What will happen when two clueless, wannabe lovers get a little divine intervention? 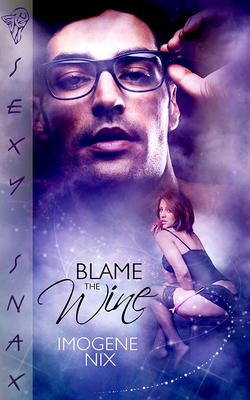 The dusty, dingy little diner was full, even with the current state of cleanliness-or lack thereof. People from the surrounding offices didn't care about anything except the incredible, well-prepared food at a reasonable cost. They flooded in, like waves to the shore. As one tide left, another swept in.

"Honestly, Simone. I'm going to try getting his attention one more time. If that doesn't work, I'm out of there. I mean, how long can I keep trying?"

Cara picked at the caramel tart she hadn't been able to resist with the cheap metal fork, and flicked the blob of fresh cream that sat on top to the side.

"But you have said that tons of times. Besides, what are you going to do to get his attention? Hmm? Walk naked through the typing pool?" Simone bobbed the straw in her smoothie as she eyed her friend with a frown. "It's been what? Eighteen months since you saw him, and you've mooned over him from a distance ever since you met him eighteen months ago. You need to move on, Cara. That is, unless you know something you haven't shared?"

The query was arch. Cara shivered even as she shook her head. "No."

Simone quirked an eyebrow, obviously unconvinced with her answer. Cara let out a deep sigh of frustration. "There's a position. It's only temporary, for a PA reporting directly to him." She speared a forkful of tart, chewed quickly and swallowed, before continuing. "In his office, full-time for the period of the engagement. I saw the memo yesterday. I mean, I have the skills, right? I can type, answer phones, make coffee, file, greet people. What's more, I can probably do it better than all those size eights in the typing pool that Ms Jackman seems to prefer." She nodded thoughtfully. "All I have to do is get past the ogre in Human Resources."

Simone stared at her, disbelief clear on her face. "Girl, I so remember that woman. If you think you can get past her, you're doing better than I ever did. That's why I left Veha Industries, remember? Maybe it's time to haul out your resumé and consider some other options." Simone shook her head and billows of crimson hair swirled through the still air.

Cara understood she only had her best interests at heart. But this time she knew the outcome would be different. Could feel it in the air.

"Cara, she'll hang you out for breakfast before she offers you anything like a position in that office. Remember her mantra? Good looks and good work make for a positive workplace?"

Cara wasn't sure she wanted to hear the truth in the statement, but as always she conceded that Simone didn't sugar-coat anything. It was another great reason for their long-term friendship.

Cara nodded quickly. "Yeah, I know, but if I don't try, then I won't know how close I can get to him, right? And the only way to catch his attention is to get past the ogre and see him in person." Cara quaked a little at the information she needed to share. The favour she needed to ask. "Anyway, I tidied up my resumé and dropped the application into a memo envelope yesterday, so it's too late to back out now. I mean, fortune favours the brave. Doesn't it? If I don't snag an interview, I'm going to visit the career advisor across the street and register with them. I'll look for temp work until something more long-term shows up. I can see what they have on offer and well. Who knows? Maybe a job with the right boss is just waiting. But I'd rather this worked out, to be honest." Her voice trailed off into a whisper. "I really wish he would notice me."

Simone took a long slurp of her banana drink, and Cara noticed her questioning gaze even as she squirmed. Finally Simone must have realised the truth in her words and nodded. "It's your funeral. So anyway, you had better show me this memo if you want me to be a referee for you. I'm guessing that's what you need, right? I'll have to know what I have to say about you before they ring."

Cara smiled. "Thanks, Simone. I knew I could count on you." She slipped a piece of paper out of her handbag and handed it over. "Sorry it's a bit creased. It was in the bottom of my bag, I stashed it so none of the others from the pool would see it. You know how that is."

Simone snorted, accepting the crumpled pages, and nodded. "Yeah, I do. Eat or be eaten."

Simone scanned the sheet while Cara fidgeted, picking at the tart she now regretted as she thought about him. Dillon Veha. The one man who filled her dreams each night. She'd tried everything else she knew to capture his attention, each action more unsuccessful than the last, including undoing buttons, personally delivering memos and the most desperate? Offering to deliver the memo to the gym locker room, knowing he was in there. Now, after eighteen months of listening to her aunt ask her when she was going to bring home a nice boy, and watching her sisters pop out perfect little babies, she conceded the time had come to move on. With or without Dillon Veha. If only she could move on with him. Therein lay the problem with her plan. She needed one last chance to make it work.

Thanks for being my guest. I absolutely adore the nerdy guy on your cover. Just my type!

And you have to be a real book nut to buy a bookstore!

Good luck with this title!

Thanks Lisabet! Yes I guess I must be :)

Hey Imogene! Fancy seeing you over here! Love the profile pic! You, take yourself seriously? Now, where would the fun be in that!
xo
Your Partner in Crime
Khloe

I love this book :) and your profile pic. Congratulations Imogene wishing you much success.

Hey Imogene! And ARRA loves that you're such a great sponsor too! Congrats on your first TEB release :-) Gotta love geeks!