From our earliest childhood memories we have explored, experimented and experienced. It’s how we learn and grow. I feel this same way about writing. It’s like a whole new world and a new me.

I’m not very adventurous by nature. I am not a go-getter or a goal-setter, but lately I’ve been doing a little experimentation, in my writing at least. I’ve been challenging myself to write in some erotic sub-genres that I’ve never tried before and in some cases haven’t read. Stepping outside of not only my experience, but in some cases, out of my comfort zone as well. This from the girl who started out thinking that historical romance was her genre. I’ve since learned, I don’t have a specific genre and I don’t want to be known for just one. I want to try it all. So, maybe I’m a little more adventurous than I thought. At least when I’m hiding behind H K the author, I am.

This is how Streetlight People came about; challenging myself. Trying something new and different, just like Andi the first female character in my latest release from Total-E-Bound. My first shot at writing ménage (f/m/f) (Andi/Street/Toni). Getting into Andi’s head was a little out of my reach at first. But writing in my favourite POV, first person, I found it easier to put myself in her place and having an open mind, I went were I’d never gone before, so to speak. I found Toni, the second female in the story, much more difficult to portray, because she at least was the one character in the threesome that may have had prior experience with multiple partners. I wanted her to appear worldly, bold and confident. Kind of the take-charge type. And Street, well, I guess he is depicted as the stereotypical guy in this situation.

I guess I pulled it off. But more to the point just as Andi was experimenting and experiencing things for the first time, so was I.  And the more I write, grow and learn the more I discover about me. Perhaps I’m not overly confident sometimes, but as a writer I am beginning to think I can be adventurous.

The next challenge I issued myself was an m/m story, which I’m happy to say has been accepted by EXtasy Publishing. What’s next? I’m not sure yet, but it has been brought to my attention recently that perhaps Streetlight People isn’t quite finished yet. (wink DG)

Thank you for having me back, Lisabet.

We all have hidden desires. Sometimes we conceal them, even from ourselves. 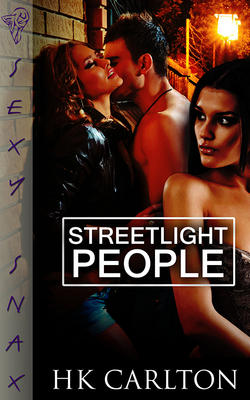 Andrea, your average college co-ed, has signed up for some extra courses at the local university, but so far the only thing that has sparked her interest is the sexy guy on campus with the tight-fitting jeans, muscle-hugging T-shirt and ever-present, shabby cowboy boots. From their fiery exchange of awareness, the admiration is not completely one-sided.

After a miserable day at her part-time job and a few drinks, Andi takes a walk, only to find herself in the arms of her campus crush, Street. As the two get to know each other rather robustly against a storefront window, Street’s girlfriend appears and issues a deliciously steamy proposition.

After a frenzied night of satisfying experimentation, Andi sneaks out while her two companions sleep, escaping the particularly awkward morning after. But in the stark light of day, Andi has to admit that her feelings for Street are more than simple infatuation, and Toni isn’t a part of the new equation.

Could Andrea possibly hope that Street might feel the same?

I could feel myself relaxing by degrees, as though a slow wave of warmth was flooding my body from top to bottom. As I began to unwind, the thought of touching Toni didn’t seem so wrong to me anymore. I actually wanted to. I mean, I still wanted to touch Street more, but I also thought that her and me touching each other might turn him on too.

I didn’t have time to think for long because Street kissed down my neck and chest, finally pausing to take my nipple back into his mouth and circling his tongue around the tight bud. I closed my eyes and savoured the tension growing inside me. I felt his hand encircle my other breast and begin the same slow swirl with his finger. I started to rock my hips against him, needing the added pressure.

The bed dipped with Toni’s weight and I felt her body spoon against my side—and Street’s too, since he was mostly on top of me. I felt her warm breath on my skin and I tensed.

But I wasn’t scared anymore. I tensed, more in anticipation than fear. And the only thought that kept running through my head was that I wouldn’t be able to stand it. I might not get the chance to enjoy it at all. I was so turned on. I was so hot. My cunt was already on fire and eager, nerve endings rippling with the electricity of what was to come.

They worked in tandem, as if they’d choreographed it - or it was practised? I remembered Street saying that Toni had picked me. Did that mean they did this often? Just picked up some stranger on the street corner and took them home to play with? I didn’t want to think about that right now. I’d think on it later, when there weren’t two different tongues laving my nipples.

I looked down at them. Toni flicked my right nipple with her delicate pink tongue, while Street lapped at the left, his caress not as soft but just as arousing. They made eye contact and seemed to communicate silently, making their tongues do exactly the same tormenting, slow circuit, followed by a rapid flicking rhythm that had me teetering on the edge of a major orgasm. My hips moved of their own accord, twisting and grinding under Street’s hard body.

All of a sudden they stopped licking me and I watched as their heads drew together. Their lips met and I looked on as their tongues began to tangle.

I gasped at being left hanging, needing, wanting. Just as quickly, as if with one mind, they broke apart and licked a path softly, teasingly, down my stomach. My belly clenched and shuddered in response. I fell back onto the pillow and closed my eyes against the violent need snaking through me. One of them paused at my belly button and teased it maddeningly, giving me a preview of what I might expect on my burning clit—if they ever got that far. I just might explode at the thought of it before they’d even travelled that short distance.

I applaud your courage - and your curiosity. And I think you really got Andie's emotions down perfectly in the excerpt. Well done.

I wish you luck with this book. A lot of romance readers think F/F interactions are "icky" for some reason. I'm not saying this to discourage you. A hot enough story with compelling characters, like this one, may be enough to change their minds.

Good for you HK that you stretch yourself and grow! Go girl. And how funny that you're not very adventurous. I really wouldn't have known that if you hadn't told us. You seem like a bold lady.

My WIP includes a F/M/F scene. I haven't gotten to it yet. That will be a stretch for me as well. Lol. You and Lisabet are both multiple genre queens! Kudos to you both.

Best of luck with the book, and thanks for sharing that super HOT excerpt.

Thank you for having me back, Lisabet.

You know, I didn't even take that into consideration, (that some romance readers find f/f interaction icky) when I began writing SLP. Shows my naïveté. ;) (or ignorance is bliss) LOL. But I did have fun writing this one, something completely different from anything I've ever tried before. I did enjoy the challenge.

Hi Normandie. I think I'm much more adventurous as H K than I am as myself. H K can do all the things I'm not brave enough to try. I'm growing a new respect for my alter-ego.

I wish you much luck writing your f/m/f scene, Normandie. May the muse be with you. :D

Thanks for stopping,
H K

Well said in your post, HK! I think you've done splendid reaching outside your comfort zone.
And phew! That is one hot excerpt. :)
Congrats on all of your success!

Thanks Jen and I'm glad you enjoyed it.

Another great interview H K! And congratulations on the story with EXtasy!
Noelle

I caught that wink. So you can be brave while writing, now I just need to talk you into getting on a plane and going to RT14 ;)
Congratulations on the new contract with EXstasy. Look forward to reading it.
Cheers
Donna

Thanks, Noelle and thanks for popping by.
H K

Wink. Yes, brave behind the book cover. LOL. I'd much rather accompany you on your other trip. :D My Highlander awaits.
Thanks, Donna
Cheers,
H K

With regard to F/F interaction - I put a snippet into Rajasthani Moon, because darn it, the scene demanded it, and I personally find it arousing. If I lose readers, so be it.

But I did run a contest a few years ago in which I asked people who entered about their willingness to read F/F. A huge majority was down on the idea.

Of course, this may be like men's virulent response to any suggestion they might find other men attractive - defensive and fearful denial of one's own impulses. Who knows?

BTW - I think that you should use M/F/F to describe the interactions in Streetlight People. F/M/F would be two girls and a guy where the girls don't interact sexually with one another.

Thank you for the tips. I learn something new every day. That is the way that TEB has it listed too. M/F/F. I'm not sure why I changed it up. I'll be sure to watch that from here on. Thanks again.
H K