I used to hate zombies. Really. Night of the Living Dead gave me more nightmares than any other movie I have ever seen. (Except for The Last House on the Left. But that is a whole other ball of wax.) The sequels had me shuddering and changing the channel. Now I can’t get enough of them. Crazy, right? I agree. If there is a new episode of Walking Dead or a rerun of Shaun of the Dead or Zombieland, I am so there with the DVR, setting that thing to tape so I can watch it while hubby is at work. Confirmed zombie hater that he is, that suits him just fine. 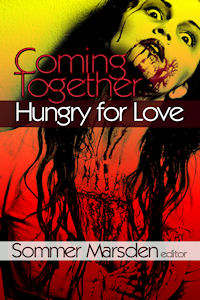 "I missed you." His voice was breathy as he pulled her tighter against him. His hand reached around to the front of her body and wandered down her thigh and underneath her skirt. Skimming the outside of her moistened panties, his hand traced her mound and she gave an involuntary shudder as he ever so lightly edged beneath the delicate fabric and slid a finger into her seeping folds.

"Trevor!" She gasped in sweet agony. Arching her back, she molded her body against him. He slowly moved his finger within her sopping cunt, creating a tension inside of her that bordered on insanity as his thumb rubbed over her clit. She struggled against the confines of her panties and wanted the offending article off. Now.

Tearing the flimsy scrap of fabric from her body, he grabbed her hips with both hands grinding her ass right into the hardness of his cock. She let loose a strangled moan and ground backwards against him. Sliding her skirt down and off, she spread her legs wider, completely naked and exposed.

When I interview authors on my blog, I often ask them a series of questions. Now it’s my turn to answer a few.
*When did you start writing erotica?

That is an interesting answer. I had dabbled a bit, but it wasn’t until I read the famed or infamous depending on your viewpoint, 50 Shades that I decided it was time to take pen to paper so to speak. I created a blog for reviewing more of the genre I was growing to love and decided after reading about ERWA and checking out their amazing submission lists, that I would try to write a few.

*What is the hardest/most awkward scene you ever wrote?

You would think it would be the sex, right? Nope. It was the fight scene in Hungry for Love. I read tons of erotica. If you want to write, first be a reader. Fight scenes are usually not in my choices of literature but I also remembered an author I interviewed for one of my blogs who said she used stuffed animals to imitate body movement and battle strategy. Guess who used her stuffed pig and detachable head zombie doll for roll playing? *raises hand*

Pizza. You would never get sushi past my lips. Ever.

Can’t I have both?

Erzabet Bishop has been in love with books since she could sound out the oddities of Dr. Seuss. Inspired by the life size cutouts of Dracula and his bride that adorned the wall of her bedroom as a teenager, she has been reading and writing fiendishly ever since. She is a writer of erotica and has never been happier since she discovered that naughty stories really are more fun. Under her real name, she reviews music, is an aspiring YA and horror author, blogs about books and can be found crocheting and watching monster movies with her husband or chasing around one of her furry children and insisting loudly that they behave. They don’t listen.

Erzabet's favorite zombie movie is Shaun of the Dead but Zombieland and Fido come in pretty close as second and third. Bring on the Twinkies.

Welcome to Beyond Romance, and thank you so much for showcasing the latest Coming Together anthology, which, from the table of contents, looks absolutely stellar.

I am such a zombie lover too! What is it about the undead that excites us? haha My husband will watch The Walking Dead but no other horror shows with me. I need a horror movie friend! Great post.

Good luck with your writing Erzabet :D
Of course you know I mainly like zombies for cannon fodder!

"Why Zombies Make the Best Lovers" by Lilycat explains it all.