[Like vampires? Below, Suz de Mello is sharing a long excerpt from her new vampire book. Have fun! ~ Lisabet]

Edgar, Laird MacReiver, had never regretted his decision to wed Isobel, daughter of Clan Kilburn’s laird…until she bit his tongue and drank his blood. Will tying her hands, spanking her rump and making her come tame the wild child of the infamous vampire clan?

Or are some women too dangerous to tame? 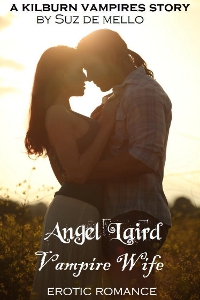 Kilburn Castle, Scotland
1766
Some said that Edgar, Laird MacReiver, had made a deal with the devil. And not just an ordinary deal, for he’d agreed to marry the devil’s daughter.
Lacking a superstitious cast of mind, he’d never regretted his decision to ally with Clan Kilburn until this moment. Atop the battlements, he disregarded the noontime sun glittering over the sea, the fresh spring breeze off the water and the white clouds scudding through the sky. Instead, he watched the scene below him.
Down in the castle courtyard, a young woman struggled with a horse. Not just any young woman. She’d been betrothed to him before her birth. And not just any horse. Isobel, now eighteen, grasped the bridle of Ranger, a buckskin stallion, the pride and joy of Edgar’s heart.
She wrestled with a reluctant Ranger before swinging long legs clad in trews over the steed’s back. Clinging to his mane, she somehow kept her seat while the stallion curvetted and spun. Her hat flew off and her braid loosened, the black hair whipping ‘round as Ranger sought to dislodge her.
Another neigh and a leap before the horse dashed out of the open gate. His hooves clattered on the drawbridge as he galloped over the moat. Isobel clung to his back like a flea unwilling to give up its perch on a dog.
“I ordered her not to ride Ranger,” Edgar said with some disbelief and more resentment. “He’s too big for her. And he’s young, not quite broken. The only rider he tolerates is me.”
“Our Isobel is a bold horsewoman.” Kieran Kilburn cocked a dark brow at Edgar. “She doesna like to admit that there’s a steed on this earth that she canna master.”
Though nearing his fiftieth year, the Kilburn chieftain hadn’t sprouted even one gray hair. No wrinkles marred his smooth, unusually white skin, save those that were the product of his constant smile. All the Kilburns shared the same traits: tall and strong, with midnight black hair and eyes. In comparison Edgar often had felt like a little white mouse, at least until he grew and the lassies started to take an interest in his fair hair and blue eyes. Then he’d realized that his different looks were an advantage.
An advantage, that is, with everyone but Isobel.
“She obeys you.” The wind loosened the leather thong tying Edgar’s hair at the nape. He tightened it. “Why not me?”
Kier’s eyes twinkled. “She obeys me, laddie, because I punish her when she does not.”
“May I borrow your Dash?” Frowning, Edgar turned to descend into the courtyard with Kieran following.
“Aye, but don’t count on Dash to catch his son.”
“We’ll do our best. Thank you, sir.” He handed his blue jacket to a guard and mounted the buckskin. “I go now to find my bride. I hope she’ll return suitably chastened.”
With a shrug, Kier folded his arms over his chest. “Ye ken what ye have to do.”
* * * * *
Edgar caught up with Isobel and Ranger in the forest. The horse now ambled rather than raced, the trees bordering the meadow surrounding the castle having slowed his flight. Edgar eased Dash into a walk and splashed through a brook while watching Ranger manage Isobel.
The stallion apparently decided that he no longer would tolerate even Isobel’s light weight and proceeded to use a low-hanging branch to scrape her off. She landed flat on her back with a grunt. Ranger headed toward the stream and the new green grass beside it, thank the gods, instead of trampling the silly wench under his hooves.
Her laughter could be heard even from several yards away. “La! What a ride! I’ll tame that mount yet.” She sat up and rubbed her back.
Still on horseback, Edgar towered over her. “The only mount who needs taming is you. No harm done, milady?” He was pleased that he kept a mild tone of voice, because inside he was seething.
“None.” She smiled up at him, her black eyes twinkling through the curtain of her lashes.
Bewitching, but he hardened his heart, determined that he’d not be led by the nose. He didn’t like managing females, and if he allowed her to rule him now, she’d rule him forever. “Whatever possessed you to steal Ranger?”
“I didn’t steal Ranger. I borrowed him.”
“Against my express wishes. If your clumsiness has harmed him, Isobel—”
“My clumsiness?” She leapt to her feet.
He gave her a long, cool stare before turning away. He chirruped to Ranger, who raised his head from the sweet grass by the stream. Still chewing, he walked sedately to Edgar.


He dismounted to caress his horse’s forehead before running his hands along the neck and body. Something hot and red billowed in Isobel’s chest. What was it? ‘Twas the same uncomfortable feeling she got when her younger brothers or sisters claimed too much of their parents’ attention. The same horrible emotion that overcame her when other lassies dared to flirt with Edgar…which happened more frequently than she liked.
Jealousy.
She was jealous of the attention Edgar was giving to a horse. A horse.
Bloody hell.
Removing his gloves, Edgar slid expert fingers up and down each of Ranger’s legs, paying particular attention to the delicate fetlocks.
She wondered how those long, tanned, strong fingers would feel if he touched her. When he finally touched her. So far he’d kept his distance even though they were affianced, a fact which she both liked and resented.
He straightened with a sigh. “No harm done. You were lucky this time, my girl.”
“Your girl? Since when am I your girl?”
He led the horse back to the stream and dropped the reins. Ranger drank placidly. Standing in the water with tail a’swish, he seemed completely unlike the wild beast she’d sought to tame. Dash joined him.
Edgar eyed the horses, then eyed her. “You’ve been mine since before you were born.”
“I mislike your manner, sir. I am yet unmarried. I belong to no man.”
“You belong to me.” He returned, looming over her, tall and blond and impossibly beautiful. The Angel Laird, the lassies called him. Well, they could have him.
“I willna be ordered. I willna be treated as though I’m a possession.”
He took her by the shoulders. “But you are.”
His mouth descended on hers while one hand seized the back of her head, holding her fast. She couldna resist, and didna want to, for she’d yearned for this moment.
***** 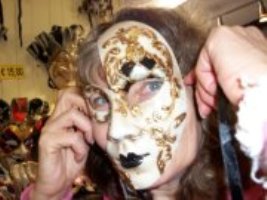 Her books have been favorably reviewed in PW, Kirkus and Booklist, attained the finals of the RITA and hit several bestseller lists. A former trial attorney, she resides in northern California. Her passion is world travel, and she’s left the US over a dozen times, including stints working overseas for many months. Right now, she's working on her next manuscript and planning her next trip.

Her blog is at http://www.fearlessfastpacedfiction.com. Find her reading picks @ReadThis4fun on Twitter, and befriend her on Facebook (http://www.facebook.com/SueSwift ). Her sites are at http://www.sue-swift.com and http://www.suzdemello.com.

You had me at Kilburn Castle, Scotland - 1766.
I love historicals and anything Scottish (blame it on the genes). Loved the Excerpt, Sue and the Blurb is attention-grabbing.

Thank you! I hope you enjoy the excerpt and will read the story. It's connected to a couple of others I've written, and is slooooowly becoming a series :)