Now that November is almost to an end, between the frantic bouts of holiday shopping and the craziness that accompanies year-end, it’s time to reflect on 2012 and set goals for 2013.

In the work place, we complete performance assessments this time of year, so I’m used to doing a catalog of accomplishments for the day job and as much as I hate that exercise, the visual of the accomplished list always leaves me astonished.  However, that rosy feeling dies a quick death when I have to categorize them into neat little buckets representing the company’s core values.

This is the first time I’ve taken stock of what I achieved this year on the publishing front, so bear with me…

In 2012, I released 4 new books, which brings my total novel count to 15, including 2 short story anthologies and 2 e-book box sets released this year in addition to the 4 new novels. I also took a good look at some of the negative feedback themes surrounding the first two books in the Steve Williams series and re-released new editions of both Dark Reckoning and Vengeance to address some of the more “offensive” scenes.

With releases comes promotions, and with the help of many wonderful bloggers, I was able to have guest spots and interviews on over fifty blogs this year. This requires writing a fair amount of interesting posts about writing, family life, and the like or answering numerous questions in new and fresh ways so folks won’t get bored reading my ramblings.

On the “giving back” front, I continue to hold a role as Senior Editor over at Allegory E-zine and as such, read over 125 Allegory submissions, helping the managing editor whittle down those finalists as well as the slush pile.  I also enjoy judging contests for Romance Writers Association and managed to fit some 26 contest entries in this year.  There are an awful lot of talented writers out there and I love being a part of their discovery.

Which leads me to our publishing company, Novel Concept Publishing, LLC.

As co-owner of this small e-press, I act as acquisitions editor, content editor, formatter, and review coordinator.  My partner does the business end and keeps our website going and is much more prolific with his writing than I am with mine.  We were blessed with four new releases this year and another coming up in December. We also have two on tap for early 2013. This means I’ve also waded through a good many submissions for NCP along with at least a dozen full submissions.

As I look back over this accounting for the year, it leaves me breathless, and when you couple it with a full time job, two kids, one that went to college this fall and the other is still in middle school with activities galore, even I think I’m insane.  Most of the time I’m running around like a crazy woman.

Imagine what I could accomplish if I drank coffee… ;-)

One of my author’s calls me superwoman and it makes me chuckle.  Nah, I’m just good at time management and my family has taken up a great deal of the slack while I’ve run this marathon.

I know I’ve said it before, but what I need to find is a balance between work and play time.  So, for 2013, my personal publishing goals are a bit more manageable.  Two books – the second in my son’s Death Chronicles Series and a novel called Fallen that takes the reader through Ty Ryan’s downfall.

As far as the Steve Williams Series, well, Saving Face was meant to be the end of that saga, however, the characters are still making a bit of a racket, so perhaps there may be another book on the horizon, but that isn’t on the list until late 2013 or early 2014.  In the meantime, if you haven’t had a chance, check out Saving Face…here’s the book description and an excerpt to whet your whistle… 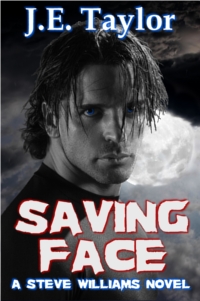 The Windwalker serial killer stalks the inlets of southern Maine for the next beauty to advance his collection and Special Agent Steve Williams is frustrated with always being a breath behind the slippery psychopath. Escalating the pressure, Steve’s adopted sons, CJ and Tom Ryan, take teenage rebellion to an entirely new level, leaving Steve in an explosive situation.

When the Windwalker slaughters Tom’s ex-girlfriend, taking her face as a macabre trinket, Tom is found on the scene covered in her blood, with her scalped body draped across his lap.  Damning evidence against him is unearthed, his father's secret identity is about to be exposed, and he's charged with Tanya’s traumatic murder.

To prove his innocence, their only hope is the worst-case scenario; for the Windwalker to harvest a new face.

“You are ruining my life!” C. J. Ryan bellowed.

Steve Williams crossed his arms and stood his ground. “I don’t care. You snuck out of the house after I said you couldn’t go to that party. You knew damn well I’d find out, and now both you and your brother are grounded until graduation.” His gaze traveled to CJ’s mute brother, Tom. “And you, what were you thinking, stealing that car?”

Tom thrust his hands in his pockets and stared at the ground.

Steve clenched his teeth together and glanced out the observation window at the Brooksfield police department pit.

“You can’t ground me. You’re not my father.”

His gaze snapped back to CJ and he tilted his head, narrowing his eyes. “I may not be your biological father, but don’t ever doubt my authority here.”

“It’s your fault my parents are dead.”

The mental shove made Steve stumble back a step and he caught himself. In two strides, he stood toe to toe with CJ, his gaze blazing into the azure blue of the seventeen-year-old’s equally furious eyes.

“You really want to play that game with me?” he asked, his voice low, almost a growl, but the kid struck a chord. His father had been caught in the cross fire of one of his FBI investigations and his mother, his mother was a completely different story. He had led her right into the belly of the beast.

CJ dropped his gaze, his eyes traveling to Tom’s before he gave a slight shake of his head.

CJ sighed and shrugged, all the hellfire burned out of him for the moment.

“Why?” Steve asked and stepped back, addressing Tom.

I wanted to see my dad. Tom thought, meeting his questioning stare.

“Bullshit.” Steve shook his head. You see him all the time. You probably can see him pacing the room behind me. Can’t you?

Tom’s gaze moved from Steve’s to the angry angel pacing the room behind him. Wings fluttered and a wealth of curses dropped from his lips, his iridescent blue eyes glaring at the two boys. Tom nodded. I wanted to talk with him.
“You could have asked me to bring you here.” Steve softened. It had been a couple months since they visited Paradise Cove. The magical portal where their father could speak to them, to see them, and where Tom had a ghost tongue along with the miraculous recovery of speech. It was the only place on earth that he could articulate his thoughts since the psycho in Georgia had cut his tongue out.

But neither boy had the same mental bond Steve had with their father. Their father was now his guardian angel, a constant presence intruding on his every thought. Steve could hear Ty Ryan any time of day or night, even times when he’d rather not have the voice of reason on his shoulder. Sometimes he wished for the blessed silence he knew before he met the Ryan family. The absolute cluelessness to the thoughts around him, to the ghost haunting his every waking minute, and to the powers he inherited when Ty died. Reading minds came in handy as an FBI agent, but the constant din in his head was maddening.

“You’ve been too wrapped up in that case to take us,” CJ answered.

That case. He almost laughed at the venom in CJ’s voice. That case shrouded his life, leaving time for nothing else and he missed more football games and nights of homework and family time his wife set aside, because of that stinking case.

Another killer was loose. The Windwalker eluded the police, eluded the FBI, and eluded him like he was made of smoke. They had gotten to the last victim minutes after she died. With her body still warm, they scoured the woods for clues, but the tracks disappeared at the bank of the river, just like every other dead, skinned body they found. Stealth, like fog rolling from the snow during strawberry spring, in and out quickly before the victim really knew what happened, and it burned him. Becoming a mission. An obsession.

CJ knew how frustrated he was and to bring it up here was just his attempt to get a rise out of him, to skirt the real issue.

He ignored the dig. “So you sneak out of the house, crash that party, have a few beers and decide it would be a great idea to steal a car?” Exasperated, he traded glances with the boys. “You crossed state lines. Do you have any idea how serious this is?”

CJ started to speak then closed his mouth. He sank into the chair, fidgeting with his parent’s wedding bands, which he wore on the chain around his neck. Tom followed suit taking the seat next to his brother.

“Grand theft auto is serious and you two are close enough to eighteen for the courts to look at this as an opportunity to teach a hard lesson.” He slid into the chair on the other side of the table and leaned forward. “I had to pull a lot of strings to make this disappear, but this is the last time I will bail you out. You hear me?” He pounded his index finger on the table, punctuating his words. “The last time!”

Thanks for having me on your blog today!

Thank you for having me today Lisabet!

Welcome to Beyond Romance. I have to say, I'm in awe of you. I honestly don't know how you can be so productive, given your real world responsibilities.

Congratulations on being a super woman!

Saving Face sounds really interesting. I wish you luck with this book, and all the others you have on tap!