Hump in the Night

[Check out my sneak peak today - a collection of gay paranormal stories by author Nephylim, entitled Hump in the Night! ~ Lisabet] 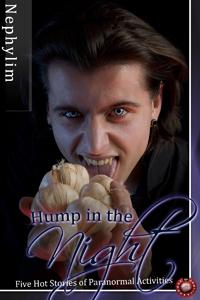 Aster is a vampire looking for someone. When he finds Kia his plan is to fuck him and drain him, but Kia has other ideas. Recognising Aster as the man he’s been waiting for, he turns the tide and seduces him, shocking him with secrets from the past. Together, they enter into an encounter that blows their minds and changes their lives forever.

Lucien is a werewolf. He’s always known he’s different. Definitely not an Alpha like his father. More akin to the bitches than the muscular Beta’s or lithe hunters he finds himself drawn to. When the enigmatic lone wolf arrives, with his pure white hair and ice blue eyes, Lucien is lost at first glance. After a burning hot dream he finally submits to the dominant male destined to be his mate for life.

Dema and Meri’el are an unlikely coupling. In the final war against good and evil they find themselves on opposing sides. Dema the demon and Meri’el the son of the King of Angels. Drugging each other with their bodies they unleash the primal fury of their true natures and rock the foundations of the earth and the heavens.

Grey doesn’t believe in curses. When he uncovers a cavern deep under the mountain feared by the villagers as a faery tomb, he scoffs at the superstition, until he meets a stranger who lures him into the wood. A steamy encounter in a forest glade has him wondering if being cursed is such a bad thing after all.

Shay is mourning the death of his soul mate, tormented by the fact he’d never told him how much he loved him. A knife in the back in a dark alley steals his chance to finally prove his commitment, until ghostly whisper in the same alley leads to a night of passion and the second chance both men crave, to finally find peace.

Demon they called him. Demon, for the red of his eyes, for the black of his skin, patterned with swirls and patterns of red, and for his leathery wings, now furled tight against his back. And yes, he supposed that demon he was, yet those he fought were no less ferocious than he, no more strangers to battle and the atrocities inherent therein.

Angels they were called. Angels, for their bright eyes, for their pale skin, glowing with light from within, and for their pure, feathered wings that spread from their backs like those of great birds. Some of them, Seraphim they were called, could kill at a glance, turn man or demon to dust in his shoes. And they were the side of good, while he and all his people were ‘bad’.

The great fight between good and evil, this battle was called. The final battle over the souls of men. He couldn’t care less about men, their souls of any part of them. Sure, some of him kind liked to dabble in the small lives of humans, but the angels interfered on a large wider scale. No, this battle wasn’t about men, it was about territory and power. It was one he hoped would be decided very soon. In fact, he was hopeful that it would be ended with the dawn, when the King of Angels discovered his son missing, and a letter in its place, inviting him to the negotiating table. He happened to know that the king valued his son greatly and, if he wasn’t prepared to parlay through force he was sure to be prepared to do so for love… wasn’t he.
He jumped when a hand touched his shoulder, then relaxed as they slid around him, to encircle him in a world of soft whiteness.

“I missed you in our bed,” a sweet voice purred in his ear. “I thought I might find you here. You should rest, tomorrow will be a long, hard day.”

The demon sighed and leaned back into the arms of his lover, who nestled a cheek against his hair. He tilted up his head and the smell of roses enveloped him, as the taller man bent his head to kiss him.

“Don’t think about what has gone. Think about how many lives will be saved when we parlay tomorrow.”

“Will they? Will the king…”

He turned and rested his forehead against the fine skin of his lover’s shoulder. A pair of pure white wings encircled him and he raised his hand, burying his fingers in the downy under-feathers. Looking up into the face of the angel who towered over him, he smiled and all his worries fell away.

“Come back to bed,” Meri’el whispered and he followed.

The bedchamber was dimly lit with muted lamps behind the pale, gauzy curtains that obscured the walls and made it seem as if they were lying inside a cloud. That was Meri’el’s influence. Dema preferred black.

Dema stood at the foot of the bed and gazed down at that snow white wings spread out over the bed like a coverlet and the pale, translucent beauty lying between them, his golden hair standing up around his head like a halo.

“You are so beautiful,” Dema breathed. “How can you love someone like me?”

“Someone like you? Someone who is passionate and wild and beautiful? It’s easy, my love. Come love me with passion.”

A red light flared in Dema’s eyes, turning his vision crimson and he sank down into the soft feathers, taking possession of Meri’el’s lips. Meri’el’s arms reached around him and pulled him close, the hard leathery body against the soft yielding flesh.

Meri’el’s breath hitched as Dema’s hardness stabbed into his hip. His own erection, standing up from its bed of gold, slapped against his stomach as he raised his hips, writhing and trying to rub himself against his lover.
Dema, just as desperate moved to straddle Meri’el, trapping their cocks between them, moving his hips to massage them together. Meri’el whimpered, gasping and clawing at Dema’s back with his fingernails, ineffective against the tough, leathery skin. “Take me, take me,” he gasped.

Hump in the Night is available from:

Bio: Nephylim was born into a poor mining family in the South Wales Valleys. Until she was 16, the toilet was at the bottom of the garden and the bath hung on the wall. Her refrigerator was a stone slab in the pantry and there was a black lead fireplace in the kitchen. They look lovely in a museum but aren’t so much fun to clean.
Nephylim has always been a storyteller. As a child, she’d make up stories for her nieces, nephews and cousin and they’d explore the imaginary worlds she created, in play.

Later in life, Nephylim became the storyteller for a re-enactment group who travelled widely, giving a taste of life in the Iron Age. As well as having an opportunity to run around hitting people with a sword, she had an opportunity to tell stories of all kinds, sometimes of her own making, to all kinds of people. The criticism was sometimes harsh, especially from the children, but the reward enormous.

It was here she began to appreciate the power of stories and the primal need to hear them. In ancient times, the wandering bard was the only source of news, and the storyteller the heart of the village, keeping the lore and the magic alive. Although much of the magic has been lost, the stories still provide a link to the part of us that still wants to believe that it’s still there, somewhere.

In present times, Nephylim lives in a terraced house in the valleys with her son and her two cats. Her daughter has deserted her for the big city, but they’re still close. The part of her that needs to earn money is a lawyer, but the deepest, and most important part of her is a storyteller and artist, and always will be.