For the past six years, Jason Hofstadter has attended the Four States Annual Scrabble Tournament. Jason comes to the Four States for two reasons: to play Scrabble and to get laid. Every year since his first, he has managed to hook up with one of the other players for some sexual fun. This year he has a chance at the grand prize in the tournament. Meanwhile he figures that he has hit the jackpot when he spots handsome, bookish Matt Sawyer, who's competing at the Four States for the first time.

If you like my excerpt - head over to Mikela Q. Chase's blog, where you just might win a copy of Crossed Hearts of your very own! Actually, the excerpt over there is the set-up for the scene below. 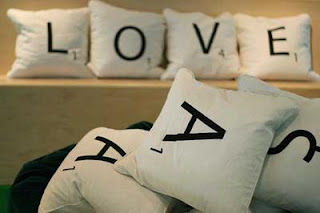 And don't forget to visit Snog Central (that is, Victoria's joint) for links to lots more kisses and other oral events!

“I might be able to show you a few tricks, too,” Matt commented, his wicked grin belying his apparent innocence. He stood and stretched his rangy limbs. “Right now, though, I’ve got to go take a leak.”
“Me too.” Did the guy really mean what Jason thought he did? He followed Matt down the back corridor to unisex bathroom. Matt entered and closed the door. Jason waited about thirty seconds then slipped inside himself, bolting the door behind him.
Matt stood in front of the corner toilet, back to the door, jeans pushed down to his ankles. Jason swallowed hard at the sight of the other man’s powerful thighs and swelling ass. His intuitions hadn’t proved wrong. Matt had the body of a wrestler rather than a weight-lifter, compact and wiry. Tawny hair dusted his thighs, but his butt was smooth as a baby’s cheek, pale and vulnerable. Jason imagined grabbing those voluptuous white globes, pulling them apart to expose the tender hole they sheltered. His aching dick leapt at the image. He sucked in his breath, fighting for control.
Matt turned at the sound, a bit awkward due to the clothes shackling his ankles. Jason got his first sight of the other man’s cock, soaring up from the dark tangles at its base, eight, nine, maybe even ten inches long. It angled towards the ceiling, impudent and tempting, bobbing with Matt’s every movement. The taut skin along shaft was dusky pink. The cap was a wet, shiny purple.

“What kept you?” Matt stroked himself once or twice. His penis jumped and quivered in his hand like some live thing. “I was beginning to think that I’d misunderstood you.”

“No, no, you didn’t misunderstand. Not at all…” Jason yanked at his fly, desperate to release his own cock. The pressure of his engorged flesh against the seam made it difficult to undo the zipper. “Damn!”

“Allow me,” said Matt, shuffling over until he was inches from Jason’s body. “Here, you take care of this.” He curved Jason’s hand around his own rod. Jason slid his palm down Matt’s smooth endless length, steel sheathed in hot silk. Matt moaned in appreciation, all the while working patiently at Jason’s zip. At last, Jason felt blessed relief as the fabric parted and his cock sprang free. It was captured by Matt’s eager hand.

“Ah! Oh, yeah…” Jason muttered. Matt might be a country hick, but he knew how to give a hand job. At first, he varied his strokes, fast then slow. He’d flick a delicate finger over Jason’s leaking knob, then squeeze hard enough to make Jason gasp. He experimented, clearly trying to discover what felt best. Before long he had switched to firm up-and-down movements like Jason used himself. But this was better, so much better, than wanking alone.

Matt’s cock throbbed in Jason’s grip, ripe and fat, dribbling fluid that he used to lubricate his strokes. He wanted to bring the guy to the edge and push him over. But it was difficult to concentrate on the other man’s pleasure, given the incredible sensations sparking through his own body. Pressure built in his groin, spiralling tighter with each of Matt’s strokes. He had already been close when he’d followed Matt into the john. He couldn’t hold on much longer.

Matt stepped closer, rubbing the tip of Jason’s cock against his bare thigh. Jason growled at the sudden change in stimulation. He reached around and claimed a fistful of Matt’s butt flesh. Matt mashed his pelvis against Jason’s jeans, trapping Jason’s hand and leaving damp trails on the fabric.

He stepped back a bit, letting go of Matt’s ass but still gripping his dick, and lowered himself to the tile floor. Matt tried unsuccessfully to hold on to Jason’s rod. “What…?”

“I want to eat you. You’re going to come in my mouth.” Matt’s cock danced in front of Jason’s face, redder now than before, wet and gleaming in the fluorescent light. Jason had never wanted anything so much.

“But…I…oh!” Matt’s protest turned into a groan of pleasure as Jason swallowed him whole. Jason swirled his tongue around the shaft then sucked hard. Matt jerked his hips, pushing deep into Jason’s throat. Jason opened wide, taking everything Matt had to give him.

His nose was buried in the prickly curls at Matt’s root. Soap, sweat and musk drowned out the faint odour of disinfectant that hung in the room. Jason’s balls tightened as he breathed in. Testosterone. Pheromones. His cock pulsed, untouched yet ready to spill from the boy’s scent.

Matt’s cock tasted salty and slightly bitter. Jason wanted more, wanted the raw, leafy flavour of the other man’s semen. Let go, he thought, pursing his lips and running them up and down the slippery shaft. Give in to me.
Matt pulled back, then rammed his cock into Jason’s palate. Jason sucked with all his might, desperate now, his dick throbbing in sympathy as Matt fucked his mouth. Don’t fight it. Come for me. Come.

Jason teetered on the edge. One touch was all it would take.

Bang! Bang! “Hey, are you all right in there?” Matt’s soft dick finally slipped out of his mouth, still amazingly long and thick. “Hurry up! Somebody needs to use the bathroom.”