When I started writing my Dr. Shadows series of stories I didn’t want to. That is to say, I wanted to write an adventure hero, for sure and loved the pulp characters and story lines of the books from the thirties, but had always resisted the urge to write period stories.

Research! It scared the heck out of me.

I’m one of those guys who yells at the History Channel if they get something wrong- no matter how small. “That sword didn’t exist for a hundred years”, “The Huns used small horses,” etc…

And when I read most modern takes on period stories I found far too many ‘winks’ or incorrect attitudes expressed by the lead characters. Or, in some ways more annoying, a shallow misunderstanding of the ‘world’ of the time.

When I did write my first Dr. Shadows adventure then, it was with an apprehension that some other reader like me would be pointing out ‘the wrongs.’ Yet, Anton Chadeaux (Dr. Shadows) was calling to me to document his adventures so I felt compelled to take the plunge.

I made the promise to myself that I would try to write a book that could have been on the newsstands in the time period it was set; a ‘lost’ pulp, if you will. 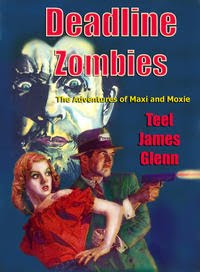 Now, understand writing period stuff, even if it is a non-fiction book is really an exercise in fantasy because you are really are building the world from the ‘ground up’- controlling everything the reader sees and hears and, hopefully feels. With a pure fantasy world, however, no one yells if you include a historical character that could not have been there or a brand of cars that hadn’t been built yet!

So I girded my loins by reading a number of period books first to get a sense of attitudes and language. But if you read stories from another time period the first thing you notice is that they generally take a lot of the culture and look for granted. Suits are not generally well described, many furnishing are just casually referred to and little details are ‘assumed’ i.e. things like hats—when and where to wear them.

Thus combined with my readings of fiction from the time I had to read non-fiction on the fashions, cars, music and food of the period. And of course, the political and cultural events of the time.

A lot of research, eh? Well, I still wasn’t done. I was lucky and cursed at the same time that the time period I was writing about (I chose the late 1930s because so much of the world was changing and exciting then) was a very well documented era. This allowed me to locate movies and still photos from the time, listen to records and read song lyrics. I had to be able to visualize the world for myself as if it were ‘my’ contemporary world.

Once I could imagine what the world looked like I did my best to ‘get inside’ it—what were the common misconceptions of the time? The popular myths? The pet peeves of the people? This was faced with the ‘internal’ part of the world- the attitudes and fears that the characters might have.

Then I was ready to begin thinking about the story. One of the side effects of doing this much research is that I often find fascinating ‘lost’ pieces of history or nifty side trips of reality that I can use. I often weave these facts into my tales and, sometimes even whole new stories that I have to write.

I’ve been lucky in not having to make major alterations to plot lines though I’ve introduced subplots to take advantage of newly uncovered facts that have added zing to the tales.

There are times, of course where I can’t verify what shops were on a certain street, or what kind of car would be in a particular place, so one has to-gasp- fake it!

Breath, breath—it's not that bad. Not real cheating. Those are the moments in the story when you focus elsewhere-internally on the characters or on some other detail. Magicians call it misdirection—making he audience look where you want them to look.

Language is another issue; words and their meanings change over time and certain phrases sound-even if they are not-too contemporary. The slang of a period says a lot about it and helps transport the reader.

“Drop a dime” on someone is the old term for making a phone call to snitch on someone—but in the 1930s it was “drop a nickel”—the cost didn’t double until the 1950s. A little fact like that helps to pull the reader back in time. So always check the slang you use.

The danger, of course, is to get so into it that you lose the modern reader—the story has to flow. It is a delicate balancing act between explaining the world and ‘living’ in it. There are dark spots in any world, tough and some of them are the denigrating aspects of culture: the curse words.

Even something as seemingly eternal as ethnic slurs have to be examined. The term W.O.P. for Italians was actually meant “Without Papers,” and referred to illegal immigrants after WWII and so could not be used prior to that. The same is true for “Spade’ as an insult for African Americans- it was actually a job description in WWII for the members of graves registry units who more often than not were black!! When you needed graves dug you called ‘for a spade’ team to do it. And that eventually got shortened and became race specific! So, again, as an insult it could not be used before 1944/5.

Conversely, some insults that were perfectly acceptable to be used as ‘normal’ references to races, i.e. N****r for black and C***k for Chinese that might have shown up in period pulp magazines I find too vile to use even to preserve a sense of period. Here I made some compromises but with some period justification in the attitudes and policies of Street and Smith publications. It was one of the premier ‘houses’ who published Doc Savage and the Shadow among other books and evidenced a tolerance and open-mindedness in the pages of their magazines that I found easy to adopt.

In the end I have four series set in the late 1930s- the Skullmask,a horror/fantasy, the good Dr. Shadows, Deadline Zombies-a husband wife investigative team and Sovereign Wolf, a native American Marshal. All of them were written with the hope that if I could go back in time they could be slipped onto a newsstand and ‘blend ‘ right in with the other pulp characters, albeit with a moderately ‘enlightened’ world view. The advantage of all them set in the same world/time frame is that I’m able to cross series and combine research though each series has a very different tone.

Did I always get it right? Well, one of my Dr. Shadows stories had a casual reference to a movie series of characters that were based on a book that was not published for five years! One reader caught it and boy was my face red. But I try—that’s all an author can ever do! 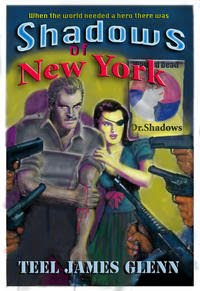 In the 1930s, the world stands at the brink of war, Japan is intent on its conquest of China, and criminal masterminds are using the confusion to carve out their own empires. Into this world strides Dr. Shadows.

When his plane was shot down over Korea by the Japanese, Dr. Shadows was nearly killed, being rescued by Korean monks who nursed him back to health with an herbal treatment that turned his skin an ashen gray, but that also gives him a speed and agility unmatched by others. After years of healing and martial arts training, Dr. Shadows is back in New York where he's established the Shadows Foundation for Justice. Through this organization (and with the help of sidekicks Slugger Harris and monk and martial artist Dr. Hoon and perky Lee Han Ku (Hank)) he'll attempt to right wrongs, solve crimes, and defeat crimelords whose greed is spurring the world toward war.

Dr. Shadows’ New York is not the glamorous stage for theater and the super-rich, but bars, Chinatown, and secret societies.

Fans of pulp fiction will chuckle over the name-dropping of mostly-forgotten characters, and the careful reconstruction of an era that is now in the past and perhaps never fully existed.

Shadows of New York is available at : http://www.booksforabuck.com/sfpages/sf_11/shadows-of-new-york.html 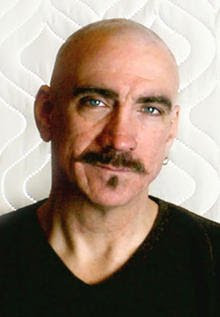 Bio: I was born in Brooklyn though I’ve traveled the world for thirty years as a stuntman, fight choreographer, swordmaster, jouster, book illustrator, storyteller, bodyguard, and actor. I even studied sword under Errol Flynn’s last stunt double. I’ve choreographed realistic violence for every Shakespeare play at least once and literally hundreds of different productions. And as a performer of I’ve done 52 Renaissance Faires, been in many genre films and TV series, most famously as Vega in the web series “Street Fighter: the later years.”

All of this life experience informs my writing; I have 30 books in print and have sold short works to magazines like Mad, Blazing Adventures, Black Belt, Classic Pulp Fiction, Fantasy Tales, AfterburnSF, Fantasy World Geographic and others.

Welcome to Beyond Romance! What a great post! I also have mostly avoided writing period fiction, for the very reasons that you cite. However, it seems that you've found your niche. Your covers are amazing!

Nice post, Teel. One of the fun things about your books is those historical allusions. Which hero had Tarzan as a horse? Another is that we can look back, with the hindsight of history, and know where some of the things you set in your background are going (e.g., the conflict between Nationalists and Communists in China).

Very interesting post. The covers look like they've come right from the '30s. It was a very fascinating time, with the Great Depression, between 2 world wars, Europe in chaos. The books sound good.